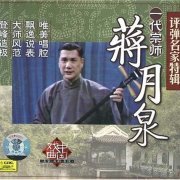 Pingtan 評彈 is a performance genre usually featuring two performers (though sometimes one or three) who sing and accompany themselves on stringed instruments, often a pipa 琵琶 or san xian  三弦. It is a form which arose in the lower Yangzi cities of Suzhou and Shanghai, and is normally performed in the Wu dialect 吳語. If it is a form you are not familiar with, I urge you to listen to some of the performances on this page.

Some of the pingtan are based on old stories (like Dream of the Red Chamber); others are based on more contemporary stories. One of the most beloved pingtan performances is entitled “Baoyu yetan“ 寶玉夜探. Three different performances of this pingtan are included here. The first is a soundfile of a performance by the master Jiang Yuequan 蒋月泉 (1917-2001) in 1955. The image to the left is of Jiang. The the text of the song and an English translation are in a text box at the bottom of the page.

The video below is another performance of the same pingtan 評彈, featuring Zhou Hong 周红 and Cai Xiaohua 蔡小华 .

The next two videos are from a television show called “The World of Pingtan”  (评弹天地). These two shows are devoted entirely to pingtan which tell stories from Dream of the Red Chamber. The first song on the second video is also “Baoyu yetan.”

TEXT AND TRANSLATION FOR BAOYU YETAN

寒露结成冰
Cold dews freeze into ice,
月色迷蒙欲断魂
The moon is hazy in the dim night,
一阵阵溯风吹入骨
Northern winds are bone-chilling,
乌洞洞的大观园里冷清清
The Prospect Garden is pitch-dark and desolate.
贾宝玉一路花街步
Jia Baoyu strolls along the flower path.
脚步轻移缓缓行
His steps are light and gentle.
他是一盏灯一个人
He is alone with a lantern in hand.
黑影憧憧更愁闷
The flickering dark shadows make him even sadder.
孤单单独自到潇湘馆
All alone he goes to the Naiad’s house
去看那林妹妹的病体她可减轻
to see if his cousin Lin has recovered.
轻敲铜环叮当响
He taps on the copper door knocker.
由那紫鹃婢子忙开门
The maid Nightingale quickly opens the door
说道二爷呀深宵寒冷宜当心
and says “Oh, young master, it’s late and it’s cold—please take care.”
姐姐呀我是放心不下你林姑娘
Baoyu says “Nightingale, I’m worried about cousin Lin
所以特地前来问安宁
so I made a special trip to inquire after her.”
他们行来已到这病榻右
As they are talking they come to Daiyu’s bedside
只见她气息奄奄不作声
She is too weak to speak
一个儿叫林妹妹
He calls softly “Cousin…
一个儿把表兄称
She acknowledges his presence,
她是杏眼微开双泪淋
and opens her almond eyes, full of tears.
说道 哥哥啊
She says “Baoyu
想我此生病体难望好
I think I will not recover from this illness.
请你宝哥哥莫管我薄命人
Please don’t care much for me, an ill-fated person.”
妹妹呀
Baoyu says “Cousin Lin.
想你一生就是烦恼多
You have had so many troubles all your life.
你何必自己太看轻
Why are you so hard on yourself?
想你有什么心事尽管说
Please tell all your worries to me
我与你两人合一心
The two of us share one heart.
我劝你么一日三餐多饮食
I advise you to eat three times a day.
我劝你么衣衫冷暖要当心
I advise you to wear warm clothing in cold weather.
我劝你养身先养心
I advise you to take care of your body first, and then take care of your spirit.
何苦自己把烦恼寻
there is no earthly reason to trouble yourself
我劝你姊妹的语言不能听
I advise you not to listen to the words of our cousins,
因为她们似假又似真
which are sometimes true and sometimes false.
我劝你么早早安歇莫夜深
I advise you to go to bed early and not stay up late at night,
可晓得你病中人再不宜磨黄昏
which is not proper for an invalid in your condition.
我劝你把一切心事都丢却,
I advise you forget all cares.
更不要想起扬州这旧墙门
Moreover,forget about your hometown in Yangzhou.”
那黛玉闻言她频点首
Daiyu nods at Baoyu’s words.
说道 哥哥言语我记在心.
and says, “Cousin, I will hold your words in my heart.”

Text and translation slightly modified from that available on YouTube.

Suggestions for Further Reading:  HE Qiliang, “Between Accommodation and Resistance.”