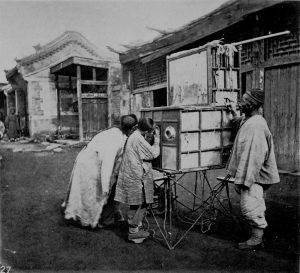 Beginning in the eighteenth century, peepshows made an appearance on the streets of Chinese cities. They were sometimes called Xihu jing jing (West Lake lens or West Lake scenes), or Xiyang jing (Western lens or scenes). Shang Wei explains the Xihu jing thus:

“West Lake Lens refers to a variety of optical devices that changed over time. The simplest type consisted of a cabinet or box with peepholes to allow a person to view a series of pictures arranged in sequence inside and pulled into view one at a time by a string controlled by the operator or performer. In some cases, mirrors were placed inside the cabinet so that a viewer could see reflections of an image from different angles.  More sophisticated devices employed a convex lens, magnifying glass, or telescope to present the image and to produce a visual sensation that transfixed audiences of the time. “(Shang Wei “The Story of the Stone and its Visual Representations from 1791 to 1919″ in Schonebaum and Lu, 361) 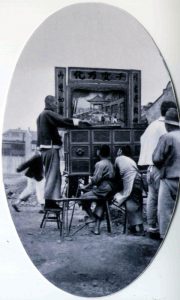 The subject matter for the peep shows was varied, but one popular theme for the shows was stories from novels, including, of course, Dream of the Red Chamber.

Images from Dream of the Red Chamber in Peepshows

These two images were used in peepshows.  They show a strong visual resemblance to New Year’s prints; in fact some of the peepshow prints were made by the same publishing houses that made New Year’s prints. The lines are somewhat simpler and cleaner than we see in a typical New Year’s print. 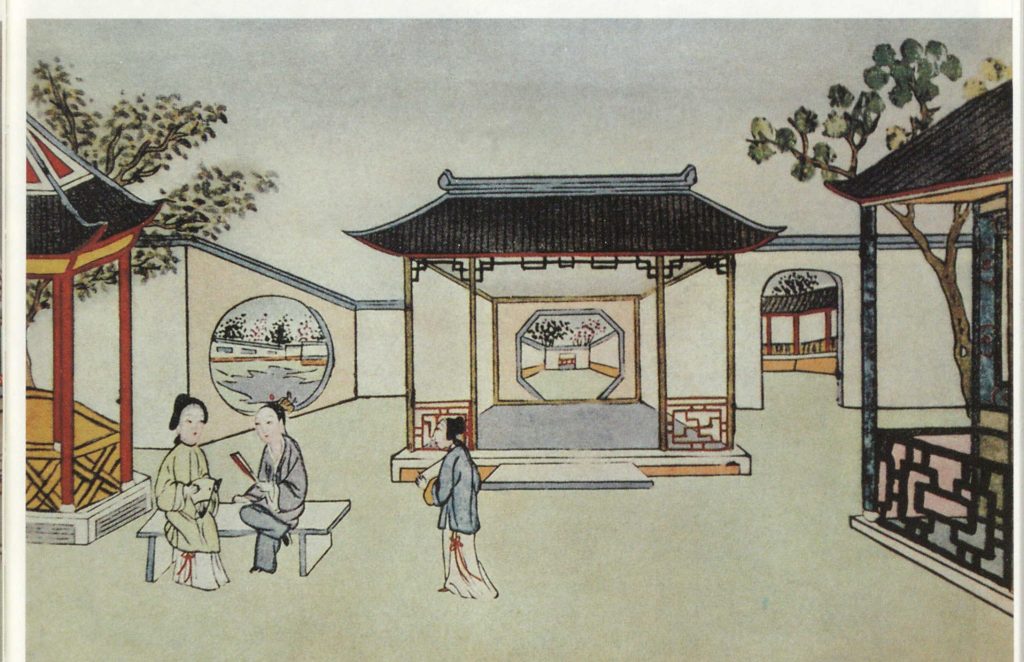 The image above illustrates a scene from chapter 31.  The title on the published version of the image is “A torn fan is the price of silver laughter.” Baoyu has reprimanded Skybright for taking anger out on objects, but tells her that

“If you want to smash things on purpose because you like the noise, it’s perfectly all right to do so.  As long as you don’t get into a passion and start taking it out on things–that’s the golden rule.”

“All right then,” said  Skybright with a mischievous smile. “Give me your fan to tear.  I love the sound of a fan being torn.”

He gives her his fan, and she does indeed tear it.  There is a bittersweet note to this scene: Skybright’s impetuousness does not serve her well in the end, and the reader (or re-reader) of the novel knows this.

In general, Daiyu’s clothing is not described in great detail in the novel, which is yet another fact which distinguishes her from other characters in the novel. However, in this chapter, we are told that Baoyu waited “while she put on a pair of little red-leather boots which had a gilded cloud-pattern cut into their surface, a pelisse of heavy, dark red bombasine lined with white fox-fur, a complicated woven belt made out of silvery-green shot silk, and a snow hat.”  黛玉換上掐金挖雲紅香羊皮小靴，罩了一件大紅羽縐面白狐狸皮的鶴氅，繫一條青金閃綠雙環四合如意絛，上罩了雪帽  (from Chinese text project)

The mention of the boots is extremely interesting. Chinese women bound their feet; Manchu women did not.  The bound foot was highly erotic and is almost never represented or discussed, outside of pornography.  We do not actually know the ethnicity of the Jia family. (Indeed, we are never even told in which dynasty the novel is set.)  The family of Cao Xueqin, the author of the novel, were bannermen, which means that they had declared loyalty to the Manchus prior to the Manchu conquest of China in 1644.  Thus there is a way in which the Cao family is something of a hybrid.  And in the novel Cao Xueqin wrote, despite the fact that it is set in an unspecified dynasty, we see characters greeting one another using a “Manchu salute.” Some of the delicacies served in the household were, according to Evelyn Rawski, the sort of thing that would appeal to the tastes of bannermen. (Rawski in Schonebaum and Liu.)

We do not know if Daiyu had bound feet.  The silences surrounding bound feet are such that if she did have bound feet, the novel would not discuss the fact.  Still, Baoyu waiting and (presumably) watching while she puts boots on strikes me as a sign of intimacy.

Suggestions for Further Reading: Rawski, “The Banner Story of the Stone” and Shang Wei, “The Stone Phenomenon and its Transformation from 1791 to 1919,” both in Schonebaum and Lu.