The best English translation of Honglou meng is by David Hawkes and John Minford, under the title The Story of the Stone, and published by Penguin. Hawkes translated the first 80 chapters (vols. 1-3) and Minford translated the final 40 (vols.4-5).

Hawkes said, in an interview with his collaborator and son-in-law, John Minford, in response to a question about the principles of translation he employed:

I don’t know if I’ve got any principles… I thought that what I’d like to do was a translation where I didn’t have to think about academic considerations, scholarly considerations. I’d think about how to present this book–this was Penguin after all–in such a way that I did the whole of it but at the same time it was enjoyable to the English reader, if possible. They could get some of the pleasure out of it that I had got myself. (Minford in Schonebaum and Lu, 343).

Hawkes’ commitment to making his translation a novel that would give pleasure to English readers is particularly visible in his poetry translations. The novel is full of poetry–poetry writing is a social occupation among the young ladies of the family. Hawkes translates the poetry with great attention to the rhyme and the meter of English, which means of course that he sometimes has to sacrifice some precision of meaning.  Paul Rouzer, who terms Hawkes’ translations of the poems in chapter 27 as a “tour de force” has retranslated those poems especially for this course.  Rouzer’s translations are attentive to the sound of language, but they do not rhyme.  The force of their meaning is somewhat closer to the Chinese original.

Hawkes’ commitment to produce a novel that could be appreciated by lovers of English novels in no way diminished his commitment to scholarship on the novel. He consulted many variant editions of the novel in preparing his translation.  I would argue that his translation stands in a line of distinguished commentary on the novel; putting the novel into English required thousands of interpretive decisions. He danced a line between the demands of the original novel and the need to create a novel that would have meaning in the present time. Echoing Rouzer, I would call the translation a tour de force.

The library of the Chinese University of Hong Kong holds the manuscript of the Hawkes translation of vols. 2-80. A link to the library’s David Hawkes’ archive is available here.

Another excellent translation of the novel is by Gladys Yang and Yang Xianyi. It is quite accurate, but it does not have the grace and ease of the Hawkes/Minford translation.  It is sometimes useful for a student, especially one who does not read Chinese, to compare translations and to think about different choices made by translators. Translation studies is a flourishing field of academic study: the Wikipedia article on translation studies can give a sense of what scholars are doing and where you might go to begin reading on the topic.

The Yangs translated the entire novel, but they also have produced an abridged translation, which is useful for those who are interested in the novel but find the prospect of reading 120 chapters somewhat daunting. 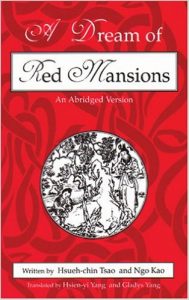 Yang Xianyi (or Hsien-yi, as it is sometimes spelled) and Gladys Taylor Yang were extremely important translators of Chinese fiction in the mid-twentieth century. Something of the importance of her work can be gleaned from this obituary written by Delia Davin at her death in 1999.  And something of Yang Xianyi’s stature and the tribulations of the couple can be gained from this obituary, written in 2009.

These translations, and work like the Hwang/Sheng opera, serve to place Dream of the Red Chamber squarely in the realm of world literature.  It is a work that has multiple lives and multiple readerships.

Sheng and Hwang on Adaptation

In this video, Bright Sheng and David Henry Hwang discuss the process of adapting the novel into an opera (which they did for the San Francisco Opera in 2016)  with Ann Waltner.  They talk about adaptation from one genre to another and from one language to another. Hwang makes the point that sometimes one has to violate the specifics of a text to stay true to its heart.  Sheng talks about the David Hawkes translation of Story of the Stone as an example of a work which gets to the heart of a text while occasionally sacrificing the literal meaning of a line.

In these lectures, John Minford (who translated the last forty chapters of Story of the Stone) talks about his career. He talks about his three great mentors–David Hawkes, Yang Hsien-yi and Liu Ts’un-yi. In the third of the lectures, at about minute 8, he begins talking about Hawkes.

This web page has links to a series of lectures on translation by John Minford, who translated the last 40 chapters of Story of the Stone, (an alternate title for Dream of the Red Chamber).  In these lectures, he talks about four great translators of Chinese literature David Hawkes, who translated the first 80 chapters of Story of the Stone, James Legge, Herbert Giles, and Arthur Waley.

Here John Minford talks about a variety of translations of Dream of the Red Chamber.