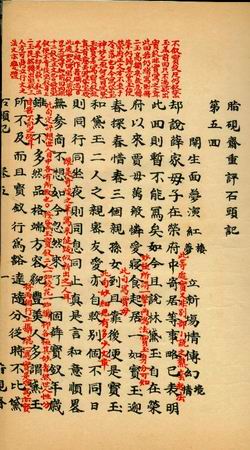 The novel Dream of the Red Chamber circulated in manuscript form from the date of its composition in 1754 until its publication in 1791. Prior to its publication, the novel circulated in manuscript form among a fairly small circle of family and friends. Tina Lu speculates about the circulation of the novel: “Differences among versions arose in part through how manuscript versions were circulated, among close friends and relations whose opinions and comments might have helped shape a new draft.  What must have happened is that one copy was returned to Cao Xueqin 曹雪芹 and then sent to someone else, while another version, shaped by those comments, was being written, soon to be sent out.  Since the readers were all people Cao Xueqin 曹雪芹  knew, these first commentaries all speak not just of intimacy with him but also of familiarity with events described in the novel–hence such references to shared experience as ‘I was there’ and ‘I remember it as if it were yesterday’.” (Lu in Schonebaum and Lu, 103).

As David Rolston writes, when the novel circulated in manuscript, “it was probably literally true that every reader of the novel was a commentator…”  The edition of the novel published in 1791 did not contain the original commentaries.  But that did not halt the tradition of commentary.  Rolston continues, “After the novel was published and the circle of readers widened, this high proportion of commentators among its readers continued. Some were content to scribble comments on their personal copies, some felt the need to publish them; some made their comments orally to their friends, some wrote sequels and imitations of the Honglou meng in order to contain them.” (Rolston, Traditional Fiction Commentary, 347) One might add some wrote operas and some devised websites.

The commentarial tradition in Chinese fiction is closely related to commentary on classics, where scholars would write interlinear commentary, sometimes glossing words, sometimes providing explications of allusions, and sometimes giving their own interpretations of the meaning of the text.  This particular commentarial tradition—which literally takes place in between the lines of the text, is connected to the practice of writing colophons on paintings. It was common practice for collectors and connoisseurs to write colophons  (often poetry) on the surface of paintings. (For a discussion of a particular colophon, by the poet Zhou Qi 周綺 on a painting by Wang Qiao 汪 乔 see here.)  The practice of colophon writing suggests that the work of art is not a finished object to be hung on the wall or put on a shelf, but rather exists in a dynamic interaction with the viewer. Interlinear commentary also marks a strong intervention in how readers interpreted texts, an intervention which happened as they were reading, rather than after they had put the book down.

One of the manuscript editions is known as the Zhiyan zhai 脂硯齋 (or Red Inkstone) edition, one page of which is displayed on the left of this text. The identity of the commentator known as Zhiyan zhai 脂硯齋 is still unknown, though most scholars think that it must have been someone with close connections to the family of Cao Xueqin 曹雪芹, based on the nature of some of the comments which imply that he had personal knowledge of events resembling those which appear in the novel.

If you are intrigued by the concept of commentary, you might want to check out a recent special issue of the journal Renditions, which features translations of segments of Jin Ping Mei 金瓶梅  (The Plum in the Golden Vase), Sanguo yanyi  三國演義 (Chronicle of the Three Kingdoms) and of Li Yu’s 李漁 Silent Operas (無聲戲) and Priceless Jade.  The project intends to publish segments of Honglou meng sometime in the future.  The texts in the Renditions volume reproduce both text and commentary; text, highlights, and commentary are all presented in typographically distinct form (using italics, bold, and underlining) so as to make the presentation of the text perfectly clear.

Suggestions for Further Reading: Martin Huang, “Readership and Reading Practices: The Story of the Stone in Premodern China” in Schonebaum and Lu; Rolston Traditional Chinese Fiction and Fiction Commentaries and How to Read a Chinese Novel.

The text below is an English translation of the opening of chapter 5 of the novel–the text is in bold font and the commentary is in italic font.  The translation of the text proper closely follows that of David Hawkes.  Chinese charaters for names are not given because full Chinese text is included below the English text.

Dear Reader, the conditions under which Madame Xue and Baochai took up residence in the Rongguo mansion have already been made clear; this chapter for the time being writes no more of that. [This way of opening a chapter would not appear in fiction of the old fashioned sort.]  We will now speak of Lin Daiyu.

From the moment Lin Daiyu entered the Rong mansion, Grandmother Jia’s solicitude for her had manifested itself in a hundred different ways.  The arrangements made for her meals and accommodation were exactly the same as for Bao-yu. [How marvelous! This is what is known as making two hits with one punch.  We can discern Baoyu’s status from this.]  The other three granddaughters, Yingchun, Tanchun, and Xichun, were relegated to a secondary place in the old lady’s affections [This sentence refers to Granny Jia] and the objects of her partiality themselves began to feel an affection for each other which far exceeded what they felt for any of the rest.  [This sentence is marvelous.  If you consider it carefully you will see that it speaks volumes.]  Sharing each other’s company every minute of the day and sleeping in the same room at night, they developed an understanding so intense that it was almost as if they had grown into a single person.

And now suddenly this Xue Baochai had appeared on the scene.  [The author uses a sharp brush, and writes in a powerful style.  It’s almost as if she appears here for the first time.] Baochai, though very little older than Daiyu, possessed a grown-up beauty and aplomb in which all agreed Daiyu was her inferior.  [This is an evaluative statement.  I think that different people will have different takes  on it.  As for Daiyu and Baochai, one of them is like a lovely flower and the other is like a delicate willow.  Each of them is marvelous in her own way.  People’s natures will cause them to evaluate their sweetness and bitterness differently]

Moreover, in contrast to Daiyu with her air of lofty self-sufficiency and total obliviousness to all who did not move on the same exalted level as herself, [Describing the characteristics of these two characters together, this is really hard to do.  Indeed, in all the thousands of  novels heretofore written, none has yet dared to use this technique.]  Baochai had a generous, accommodating disposition which greatly endeared her to subordinates, so that even the tiniest maid looked on Miss Baochai as a familiar friend.  Daiyu could not but feel somewhat put out by this [This sentence expresses a failing of talented people through the ages–those people who are like Daiyu, we should give them some leeway to be jealous. This is a shortcoming of Daiyu’s], a  fact of which Baochai herself was totally unaware. [At this point, she is being natural, but later on in the novel she will learn to feign a lack of awareness.]

As for Baoyu he was still only a child.

This is the Chinese original of the same text. The text of the novel is in bold; the commentary is in square brackets.

In this sound file, Li Kan reads the text of the opening of chapter five of the novel, and Zhu Tianxiao reads the commentary.  When you listen to this text, you can hear the interaction between text and commentary.

Does this commentary affect how you read this short text? Can you imagine how commentary might affect your reading of a novel?  Can you think of any English-language equivalence to this style of commenting?