The image to the left is the noted Beiing opera singer Mei Lanfang 梅蘭芳 performing the role of Daiyu in the scene “Daiyu Buries Flowers” (黛玉葬花). The image dates from sometime in the 1920s. The video below (which is actually just an audio recording; there are no images) is of him performing the role. The recording is old, and the sound quality is not good, but it still will give you a sense of Mei Lanfang.

In Peking Opera, female roles are often played by male performers.  Mei Lanfang 梅蘭芳attracted worldwide attention for his skill and beauty as a performer of women’s roles. Images of him in female roles, such as the one to the left, were extremely popular in Shanghai in the 1920s. 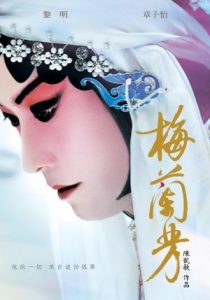 The 2008 movie “Forever Enthralled,” which is easily available from Amazon and other suppliers, deals with Mei’s career and has a short excerpt of his performing Lin Daiyu as she sweeps flowers in order to bury them.  Leon Lai performs the role of Mei Lanfang. The image to the right is a poster advertising the film, whose Chinese name is simply “Mei Lanfang.”