In addition to competitive moves, firms can benefit from cooperating with one another. Cooperative moves such as forming joint ventures and strategic alliances may allow firms to enjoy successes that might not otherwise be reached (Table 6.8 “Making Cooperative Moves”). This is because cooperation enables firms to share (rather than duplicate) resources and to learn from one another’s strengths. Firms that enter cooperative relationships take on risks, however, including the loss of control over operations, possible transfer of valuable secrets to other firms, and possibly being taken advantage of by partners (Ketchen, et. al., 2004).

A joint venture is a cooperative arrangement that involves two or more organizations each contributing to the creation of a new entity. The partners in a joint venture share decision-making authority, control of the operation, and any profits that the joint venture earns.

Sometimes two firms create a joint venture to deal with a shared opportunity. In April 2011, a joint venture was created between Merck and Sun Pharmaceutical Industries Ltd., an Indian pharmaceutical company. The purpose of the joint venture is to create and sell generic drugs in developing countries. In a press release, a top executive at Sun stressed that each side has important strengths to contribute: “This joint venture reinforces [Sun’s] strategy of partnering to launch products using our highly innovative delivery technologies around the world. Merck has an unrivalled reputation as a world leading, innovative, research-driven pharmaceutical company (Merck, 2004).” Both firms contributed executives to the new organization, reflecting the shared decision making and control involved in joint ventures.

Franklin Roosevelt once quipped, “Competition has been shown to be useful up to a certain point and no further, but cooperation, which is the thing we must strive for today, begins where competition leaves off.” We illustrate four commonly used cooperative moves used by firms below.

A strategic alliance is a cooperative arrangement between two or more organizations that does not involve the creation of a new entity. In June 2011, for example, Twitter announced the formation of a strategic alliance with Yahoo! Japan. The alliance involves relevant Tweets appearing within various functions offered by Yahoo! Japan (Rao, 2014). The alliance simply involves the two firms collaborating as opposed to creating a new entity together.

The pharmaceutical industry is the location of many strategic alliances. In January 2011, for example, a strategic alliance between Merck and PAREXEL International Corporation was announced. Within this alliance, the two companies collaborate on biotechnology efforts known as biosimilars. This alliance could be quite important to Merck because the global market for biosimilars has been predicted to rise from $235 million in 2010 to $4.8 billion by 2015(PRWeb, 2011).

Colocation occurs when goods and services offered under different brands are located close to one another. In many cities, for examples, theaters and art galleries are clustered together in one neighborhood. Auto malls that contain several different car dealerships are found in many areas. Restaurants and hotels are often located near on another too. By providing customers with a variety of choices, a set of colocated firms can attract a bigger set of customers collectively than the sum that could be attracted to individual locations. If a desired play is sold out, a restaurant overcrowded, or a hotel overbooked, many customers simply patronize another firm in the area.

Because of these benefits, savvy executives in some firms colocate their own brands. The industry that Brinker International competes within is revealed by its stock ticker symbol: EAT. This firm often sites outlets of the multiple restaurant chains it owns on the same street. Marriott’s Courtyard and Fairfield Inn often sit side by side. Yum! Brands takes this clustering strategy one step further by locating more than one of its brands—A&W, Long John Silver’s, Taco Bell, Kentucky Fried Chicken, and Pizza Hut—within a single store.

Although competition and cooperation are usually viewed as separate processes, the concept of co-opetition highlights a complex interaction that is becoming increasingly popular in many industries. Ray Noorda, the founder of software firm Novell, coined the term to refer to a blending of competition and cooperation between two firms. As explained in this chapter’s opening vignette, for example, Merck and Roche are rivals in some markets, but the firms are working together to develop tests to detect cancer and to promote a hepatitis treatment. NEC (a Japanese electronics company) has three different relationships with Hewlett-Packard Co.: customer, supplier, and competitor. Some units of each company work cooperatively with the other company, while other units are direct competitors. NEC and Hewlett-Packard could be described as “frienemies”—part friends and part enemies.

Toyota and General Motors provide a well-known example of co-opetition. In terms of cooperation, Toyota and GM vehicles were produced side by side for many years at the jointly owned New United Motor Manufacturing Incorporated (NUMMI) in Fremont, California. While Honda and Nissan used wholly owned plants to begin producing cars in the United States, NUMMI offered Toyota a lower-risk means of entering the US market. This entry mode was desirable to Toyota because its top executives were not confident that Japanese-style management would work in the United States. Meanwhile, the venture offered GM the chance to learn Japanese management and production techniques—skills that were later used in GM’s facilities. NUMMI offered both companies economies of scale in manufacturing and the chance to collaborate on automobile designs. Meanwhile, Toyota and GM compete for market share around the world. In recent years, the firms have been the world’s two largest automakers, and they have traded the top spot over time.

In their book titled, not surprisingly, Co-opetition, A. M. Brandenberger and B. J. Nalebuff suggest that cooperation is generally best suited for “creating a pie,” while competition is best suited for “dividing it up (Brandenberger & Nalebuff, 1996).” In other words, firms tend to cooperate in activities located far in the value chain from customers, while competition generally occurs close to customers. The NUMMI example illustrates this tendency—GM and Toyota worked together on design and manufacturing but worked separately on distribution, sales, and marketing. Similarly, a research study focused on Scandinavian firms found that, in the mining equipment industry, firms cooperated in material development, but they competed in product development and marketing. In the brewing industry, firms worked together on the return of used bottles but not in distribution (Bengtsson & Kock, 2000). 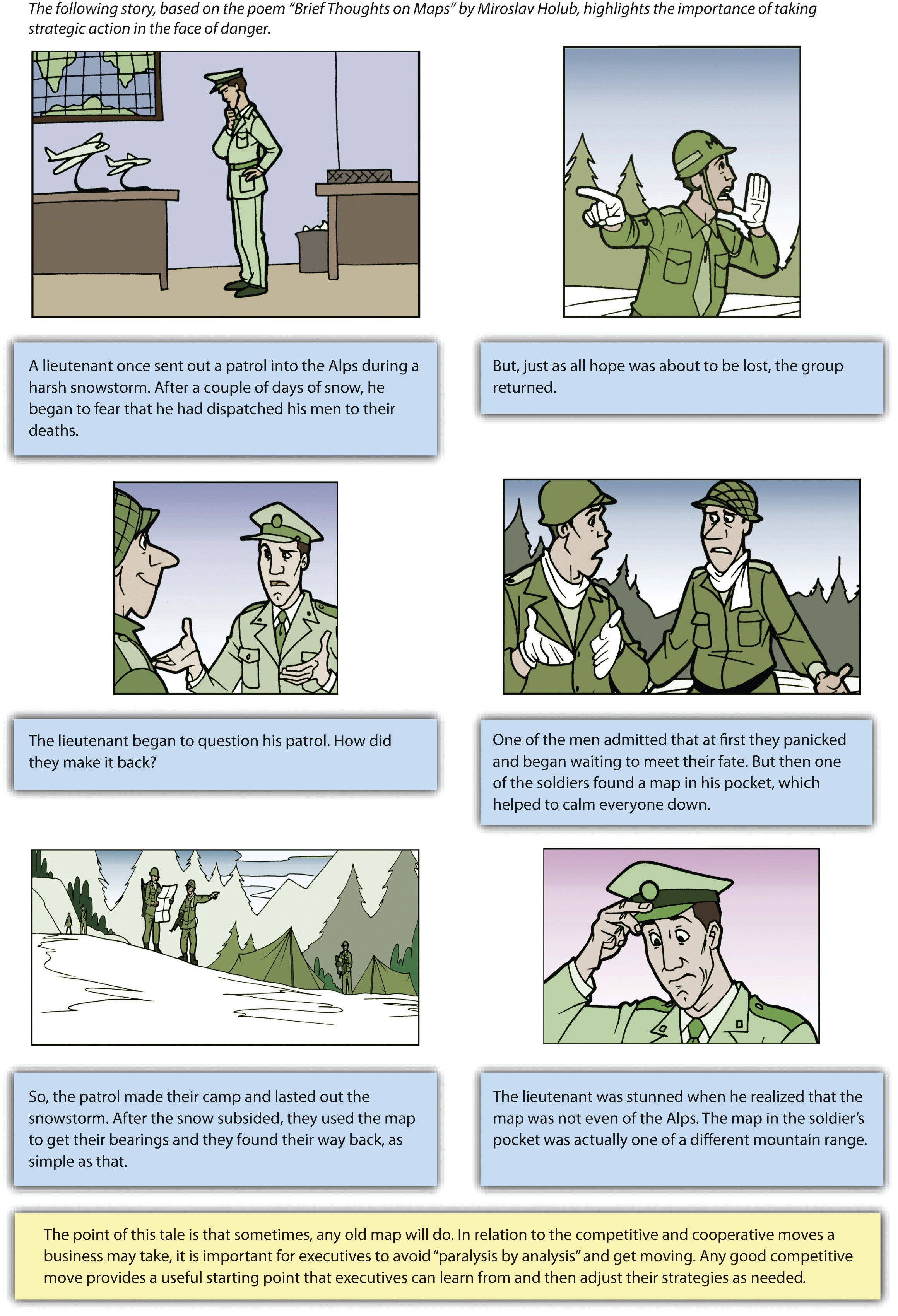 Joseph Addison, an eighteenth-century poet, is often credited with coining the phrase “He who hesitates is lost.” This proverb is especially meaningful in today’s business world. It is easy for executives to become paralyzed by the dizzying array of competitive and cooperative moves available to them. Given the fast-paced nature of most industries today, hesitation can lead to disaster. Some observers have suggested that competition in many settings has transformed into hypercompetition, which involves very rapid and unpredictable moves and countermoves that can undermine competitive advantages. Under such conditions, it is often better to make a reasonable move quickly rather than hoping to uncover the perfect move through extensive and time-consuming analysis (Figure 6.9 “Get Moving!”).

The importance of learning also contributes to the value of adopting a “get moving” mentality. This is illustrated in Miroslav Holub’s poem “Brief Thoughts on Maps.” The discovery that one soldier had a map gave the soldiers the confidence to start moving rather than continuing to hesitate and remaining lost. Once they started moving, the soldiers could rely on their skill and training to learn what would work and what would not. Similarly, success in business often depends on executives learning from a series of competitive and cooperative moves, not on selecting ideal moves.