A few years ago, a consultant posed a question to thousands of executives: “Is your industry facing overcapacity and fierce price competition?” All but one said “yes.” The only “no” came from the manager of a unique operation—the Panama Canal! This manager was fortunate to be in charge of a venture whose services are desperately needed by shipping companies and that offers the only simple route linking the Atlantic and Pacific Oceans. The canal’s success could be threatened if transoceanic shipping was to cease or if a new canal were built. Both of these possibilities are extremely remote, however, so the Panama Canal appears to be guaranteed to have many customers for as long as anyone can see into the future.

When an organization’s environment is stable and predictable, strategic planning can provide enough of a strategy for the organization to gain and maintain success. The executives leading the organization can simply create a plan and execute it, and they can be confident that their plan will not be undermined by changes over time. But as the consultant’s experience shows, only a few executives—such as the manager of the Panama Canal—enjoy a stable and predictable situation. Because change affects the strategies of almost all organizations, understanding the concepts of intended, emergent, and realized strategies is important (Table 1.2 “Strategic Planning and Learning: Intended, Emergent, and Realized Strategies”). Also relevant are deliberate and nonrealized strategies. The relationships among these five concepts are presented in Figure 1.3 “A Model of Intended, Deliberate, and Realized Strategy” (Mintzberg & Waters, 1985).

Figure 1.3 A Model of Intended, Deliberate, and Realized Strategy 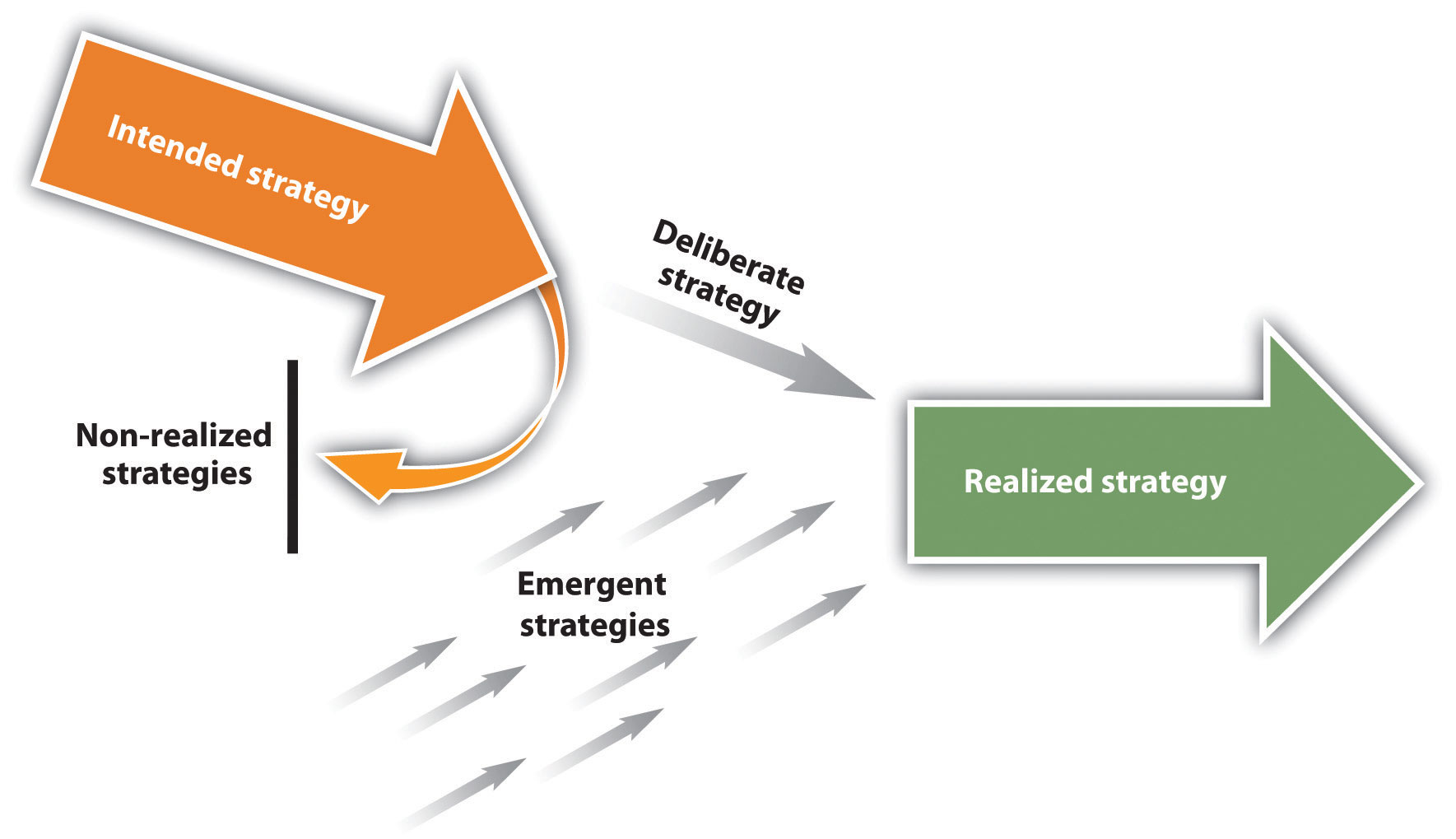 An intended strategy is the strategy that an organization hopes to execute. Intended strategies are usually described in detail within an organization’s strategic plan. When a strategic plan is created for a new venture, it is called a business plan. As an undergraduate student at Yale in 1965, Frederick Smith had to complete a business plan for a proposed company as a class project. His plan described a delivery system that would gain efficiency by routing packages through a central hub and then pass them to their destinations. A few years later, Smith started Federal Express (FedEx), a company whose strategy closely followed the plan laid out in his class project. Today, Frederick Smith’s personal wealth has surpassed $2 billion, and FedEx ranks eighth among the World’s Most Admired Companies according to Fortune magazine. Certainly, Smith’s intended strategy has worked out far better than even he could have dreamed (Donahoe, 2011; Memphis Business Journal, 2011).

Emergent strategy has also played a role at Federal Express. An emergent strategy is an unplanned strategy that arises in response to unexpected opportunities and challenges. Sometimes emergent strategies result in disasters. In the mid-1980s, FedEx deviated from its intended strategy’s focus on package delivery to capitalize on an emerging technology: facsimile (fax) machines. The firm developed a service called ZapMail that involved documents being sent electronically via fax machines between FedEx offices and then being delivered to customers’ offices. FedEx executives hoped that ZapMail would be a success because it reduced the delivery time of a document from overnight to just a couple of hours. Unfortunately, however, the ZapMail system had many technical problems that frustrated customers. Even worse, FedEx failed to anticipate that many businesses would simply purchase their own fax machines. ZapMail was shut down before long, and FedEx lost hundreds of millions of dollars following its failed emergent strategy. In retrospect, FedEx had made a costly mistake by venturing outside of the domain that was central to its intended strategy: package delivery (Funding Universe).

Emergent strategies can also lead to tremendous success. Southern Bloomer Manufacturing Company was founded to make underwear for use in prisons and mental hospitals. Many managers of such institutions believe that the underwear made for retail markets by companies such as Calvin Klein and Hanes is simply not suitable for the people under their care. Instead, underwear issued to prisoners needs to be sturdy and durable to withstand the rigors of prison activities and laundering. To meet these needs, Southern Bloomers began selling underwear made of heavy cotton fabric.

An unexpected opportunity led Southern Bloomer to go beyond its intended strategy of serving institutional needs for durable underwear. Just a few years after opening, Southern Bloomer’s performance was excellent. It was servicing the needs of about 125 facilities, but unfortunately, this was creating a vast amount of scrap fabric. An attempt to use the scrap as stuffing for pillows had failed, so the scrap was being sent to landfills. This was not only wasteful but also costly.

One day, cofounder Don Sonner visited a gun shop with his son. Sonner had no interest in guns, but he quickly spotted a potential use for his scrap fabric during this visit. The patches that the gun shop sold to clean the inside of gun barrels were of poor quality. According to Sonner, when he “saw one of those flimsy woven patches they sold that unraveled when you touched them, I said, ‘Man, that’s what I can do’” with the scrap fabric. Unlike other gun-cleaning patches, the patches that Southern Bloomer sold did not give off threads or lint, two by-products that hurt guns’ accuracy and reliability. The patches quickly became popular with the military, police departments, and individual gun enthusiasts. Before long, Southern Bloomer was selling thousands of pounds of patches per month. A casual trip to a gun store unexpectedly gave rise to a lucrative emergent strategy (Wells, 2002).

In other cases, firms’ original intended strategies are long forgotten. A nonrealized strategy refers to the abandoned parts of the intended strategy. When aspiring author David McConnell was struggling to sell his books, he decided to offer complimentary perfume as a sales gimmick. McConnell’s books never did escape the stench of failure, but his perfumes soon took on the sweet smell of success. The California Perfume Company was formed to market the perfumes; this firm evolved into the personal care products juggernaut known today as Avon. For McConnell, his dream to be a successful writer was a nonrealized strategy, but through Avon, a successful realized strategy was driven almost entirely by opportunistically capitalizing on change through emergent strategy.

Did Harvard University student Mark Zuckerberg set out to build a billion-dollar company with more than six hundred million active users? Not hardly. As shown in 2010’s The Social Network, Zuckerberg’s original concept in 2003 had a dark nature. After being dumped by his girlfriend, a bitter Zuckerberg created a website called “FaceMash” where the attractiveness of young women could be voted on. This evolved first into an online social network called Thefacebook that was for Harvard students only. When the network became surprisingly popular, it then morphed into Facebook, a website open to everyone. Facebook is so pervasive today that it has changed the way we speak, such as the word friend being used as a verb. Ironically, Facebook’s emphasis on connecting with existing and new friends is about as different as it could be from Zuckerberg’s original mean-spirited concept. Certainly, Zuckerberg’s emergent and realized strategies turned out to be far nobler than the intended strategy that began his adventure in entrepreneurship. 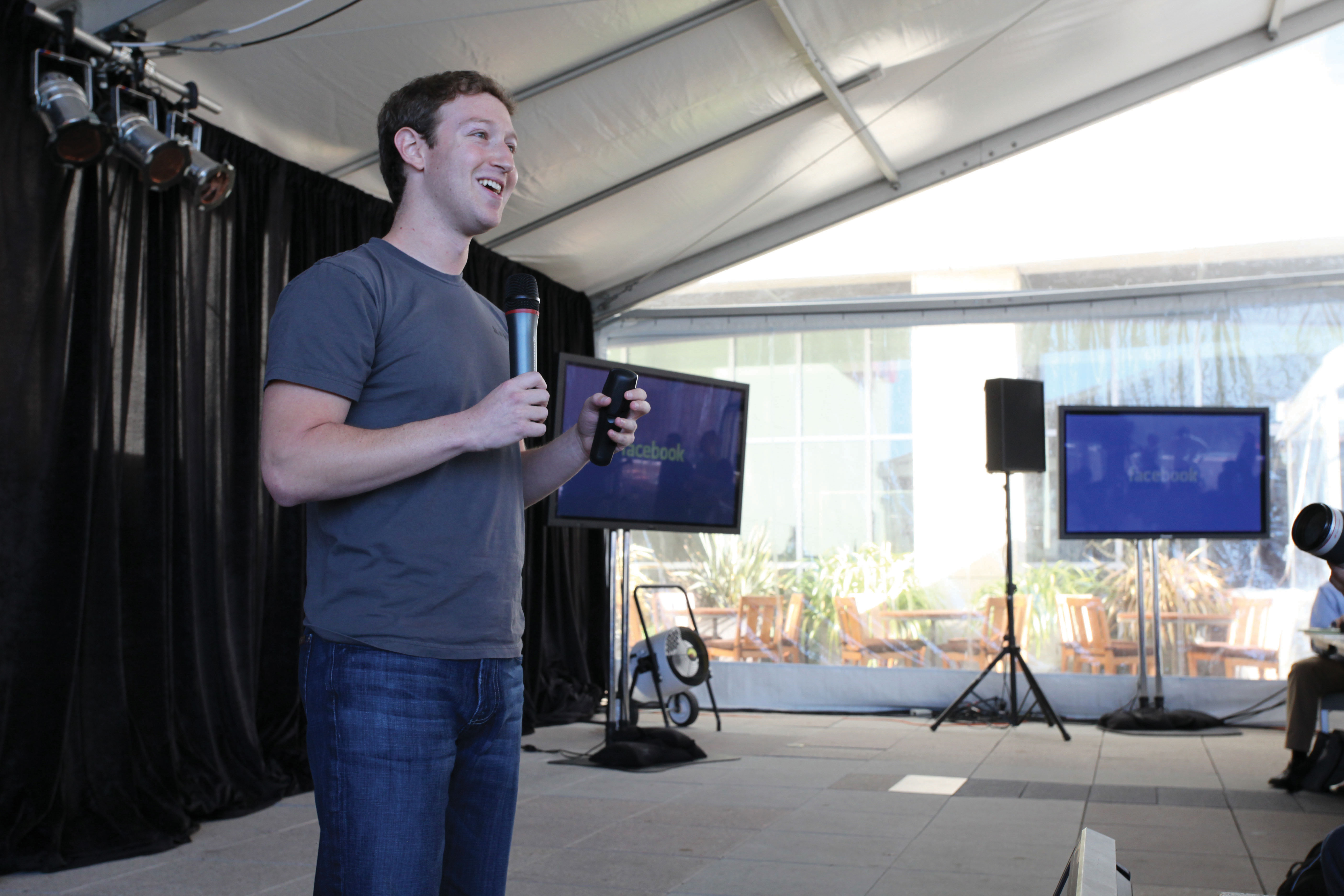 The Social Network demonstrates how founder Mark Zuckerberg’s intended strategy gave way to an emergent strategy via the creation of Facebook.