The Nature of the Cost Leadership Strategy

It is tempting to think of cost leaders as companies that sell inferior, poor-quality goods and services for rock-bottom prices. The Yugo, for example, was an extremely unreliable car that was made in Eastern Europe and sold in the United States for about $4,000. Despite its attractive price tag, the Yugo was a dismal failure because drivers simply could not depend on the car for transportation. Yugo exited the United States in the early 1990s and closed down entirely in 2008.

In contrast to firms such as Yugo whose failure is inevitable, cost leaders can be very successful. A firm following a cost leadership strategy offers products or services with acceptable quality and features to a broad set of customers at a low price (Table 5.2 “Cost Leadership”). Payless ShoeSource, for example, sells name-brand shoes at inexpensive prices. Its low-price strategy is communicated to customers through advertising slogans such as “Why pay more when you can Payless?” and “You could pay more, but why?” Little Debbie snack cakes offer another example. The brand was started in the 1930s when O. D. McKee began selling sugary treats for five cents. Most consumers today would view the quality of Little Debbie cakes as a step below similar offerings from Entenmann’s, but enough people believe that they offer acceptable quality that the brand is still around eight decades after its creation. 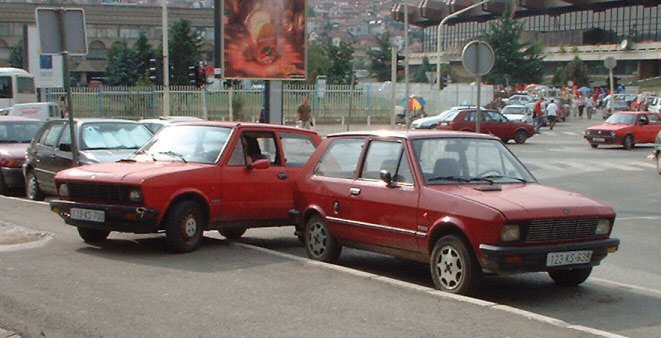 Listeners of the popular radio show Car Talk voted the Yugo as the “worst car of the millennium.”

Perhaps the most famous cost leader is Walmart, which has used a cost leadership strategy to become the largest company in the world. The firm’s advertising slogans such as “Always Low Prices” and “Save Money. Live Better” communicate Walmart’s emphasis on price slashing to potential customers. Meanwhile, Walmart has the broadest customer base of any firm in the United States. Approximately one hundred million Americans visit a Walmart in a typical week (Zimmerman & Hudson, 2006). Incredibly, this means that roughly one-third of Americans are frequent Walmart customers. This huge customer base includes people from all demographic and social groups within society. Although most are simply typical Americans, the popular website http://www.peopleofwalmart.com features photos of some of the more outrageous characters that have been spotted in Walmart stores.

Cost leaders tend to share some important characteristics. The ability to charge low prices and still make a profit is challenging. Cost leaders manage to do so by emphasizing efficiency. At Waffle House restaurants, for example, customers are served cheap eats quickly to keep booths available for later customers. As part of the effort to be efficient, most cost leaders spend little on advertising, market research, or research and development. Waffle House, for example, limits its advertising to billboards along highways. Meanwhile, the simplicity of Waffle House’s menu requires little research and development.

Many cost leaders rely on economies of scale to achieve efficiency. Economies of scale are created when the costs of offering goods and services decreases as a firm is able to sell more items. This occurs because expenses are distributed across a greater number of items. Walmart spent approximately $2 billion on advertising in 2008. This is a huge number, but Walmart is so large that its advertising expenses equal just a tiny fraction of its sales. Also, cost leaders are often large companies, which allows them to demand price concessions from their suppliers. Walmart is notorious for squeezing suppliers such as Procter & Gamble to sell goods to Walmart for lower and lower prices over time. The firm passes some of these savings to customers in the form of reduced prices in its stores.

Advantages and Disadvantages of Cost Leadership

Each generic strategy offers advantages that firms can potentially leverage to enhance their success as well as disadvantages that may undermine their success. In the case of cost leadership, one advantage is that cost leaders’ emphasis on efficiency makes them well positioned to withstand price competition from rivals (Table 5.3 “Executing a Low-Cost Strategy”). Kmart’s ill-fated attempt to engage Walmart in a price war ended in disaster, in part because Walmart was so efficient in its operations that it could live with smaller profit margins far more easily than Kmart could.

Using a cost leadership strategy offers firms important advantages and disadvantages. Below we illustrate a few examples in relation to entertainment and leisure.

Challenging a cost leader in a price war may end up destroying a company.

In many settings, cost leaders attract a large market share because a large portion of potential customers find paying low prices for goods and services of acceptable quality to be very appealing. This is certainly true for Walmart, for example. The need for efficiency means that cost leaders’ profit margins are often slimmer than the margins enjoyed by other firms. However, cost leaders’ ability to make a little bit of profit from each of a large number of customers means that the total profits of cost leaders can be substantial.

In some settings, the need for high sales volume is a critical disadvantage of a cost leadership strategy. Highly fragmented markets and markets that involve a lot of brand loyalty may not offer much of an opportunity to attract a large segment of customers. In both the soft drink and cigarette industries, for example, customers appear to be willing to pay a little extra to enjoy the brand of their choice. Lower-end brands of soda and cigarettes appeal to a minority of consumers, but famous brands such as Coca-Cola, Pepsi, Marlboro, and Camel still dominate these markets. A related concern is that achieving a high sales volume usually requires significant upfront investments in production and/or distribution capacity. Not every firm is willing and able to make such investments.

Cost leaders tend to keep their costs low by minimizing advertising, market research, and research and development, but this approach can prove to be expensive in the long run. A relative lack of market research can lead cost leaders to be less skilled than other firms at detecting important environmental changes. Meanwhile, downplaying research and development can slow cost leaders’ ability to respond to changes once they are detected. Lagging rivals in terms of detecting and reacting to external shifts can prove to be a deadly combination that leaves cost leaders out of touch with the market and out of answers.