The Slope of the Aggregate Demand Curve 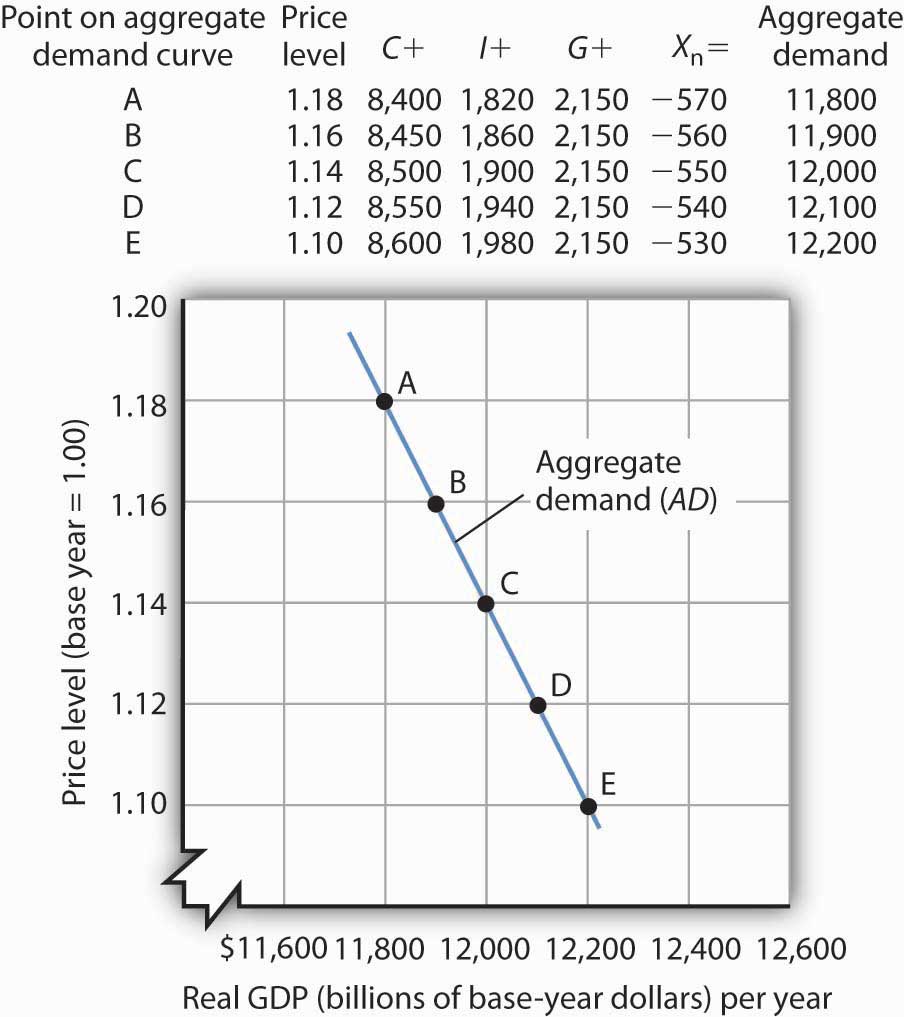 Neither of these effects is relevant to a change in prices in the aggregate. When we are dealing with the average of all prices—the price level—we can no longer say that a fall in prices will induce a change in relative prices that will lead consumers to buy more of the goods and services whose prices have fallen and less of the goods and services whose prices have not fallen. The price of corn may have fallen, but the prices of wheat, sugar, tractors, steel, and most other goods or services produced in the economy are likely to have fallen as well.

Furthermore, a reduction in the price level means that it is not just the prices consumers pay that are falling. It means the prices people receive—their wages, the rents they may charge as landlords, the interest rates they earn—are likely to be falling as well. A falling price level means that goods and services are cheaper, but incomes are lower, too. There is no reason to expect that a change in real income will boost the quantity of goods and services demanded—indeed, no change in real income would occur. If nominal incomes and prices all fall by 10%, for example, real incomes do not change.

A second reason the aggregate demand curve slopes downward lies in the relationship between interest rates and investment. A lower price level lowers the demand for money, because less money is required to buy a given quantity of goods. What economists mean by money demand will be explained in more detail in a later chapter. But, as we learned in studying demand and supply, a reduction in the demand for something, all other things unchanged, lowers its price. In this case, the “something” is money and its price is the interest rate. A lower price level thus reduces interest rates. Lower interest rates make borrowing by firms to build factories or buy equipment and other capital more attractive. A lower interest rate means lower mortgage payments, which tends to increase investment in residential houses. Investment thus rises when the price level falls. The tendency for a change in the price level to affect the interest rate and thus to affect the quantity of investment demanded is called the interest rate effect. John Maynard Keynes, a British economist whose analysis of the Great Depression and what to do about it led to the birth of modern macroeconomics, emphasized this effect. For this reason, the interest rate effect is sometimes called the Keynes effect.

Taken together, then, a fall in the price level means that the quantities of consumption, investment, and net export components of aggregate demand may all rise. Since government purchases are determined through a political process, we assume there is no causal link between the price level and the real volume of government purchases. Therefore, this component of GDP does not contribute to the downward slope of the curve.

Notice that the axes of the aggregate demand curve graph are drawn with a break near the origin to remind us that the plotted values reflect a relatively narrow range of changes in real GDP and the price level. We do not know what might happen if the price level or output for an entire economy approached zero. Such a phenomenon has never been observed. 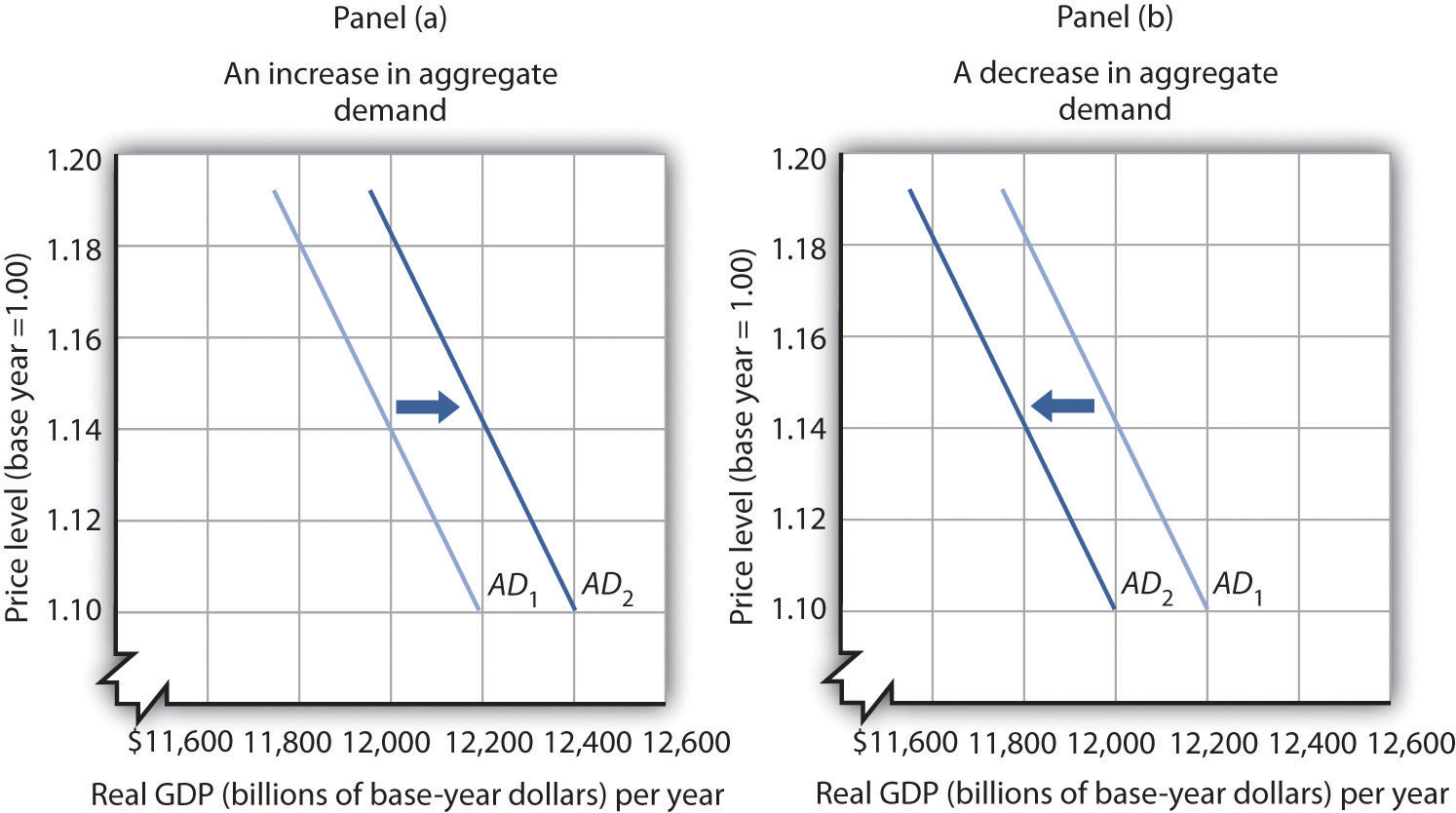 In the United States, another government policy aimed at increasing consumption and thus aggregate demand has been the use of rebates in which taxpayers are simply sent checks in hopes that those checks will be used for consumption. Rebates have been used in 1975, 2001, and 2008. In each case the rebate was a one-time payment. Careful studies by economists of the 1975 and 2001 rebates showed little impact on consumption. Final evidence on the impact of the 2008 rebates is not yet in, but early results suggest a similar outcome. In a subsequent chapter, we will investigate arguments about whether temporary increases in income produced by rebates are likely to have a significant impact on consumption.

Investment is the production of new capital that will be used for future production of goods and services. Firms make investment choices based on what they think they will be producing in the future. The expectations of firms thus play a critical role in determining investment. If firms expect their sales to go up, they are likely to increase their investment so that they can increase production and meet consumer demand. Such an increase in investment raises the aggregate quantity of goods and services demanded at each price level; it increases aggregate demand.

Investment can also be affected by tax policy. One provision of the Job and Growth Tax Relief Reconciliation Act of 2003 was a reduction in the tax rate on certain capital gains. Capital gains result when the owner of an asset, such as a house or a factory, sells the asset for more than its purchase price (less any depreciation claimed in earlier years). The lower capital gains tax could stimulate investment, because the owners of such assets know that they will lose less to taxes when they sell those assets, thus making assets subject to the tax more attractive.

The trade policies of various countries can also affect net exports. A policy by Japan to increase its imports of goods and services from India, for example, would increase net exports in India.

Suppose that net exports increase due to an increase in foreign incomes. As foreign demand for domestically made products rises, a country’s firms will hire additional workers or perhaps increase the average number of hours that their employees work. In either case, incomes will rise, and higher incomes will lead to an increase in consumption. Taking into account these other increases in the components of aggregate demand, the aggregate demand curve will shift by more than the initial shift caused by the initial increase in net exports.

The multiplier is the ratio of the change in the quantity of real GDP demanded at each price level to the initial change in one or more components of aggregate demand that produced it: 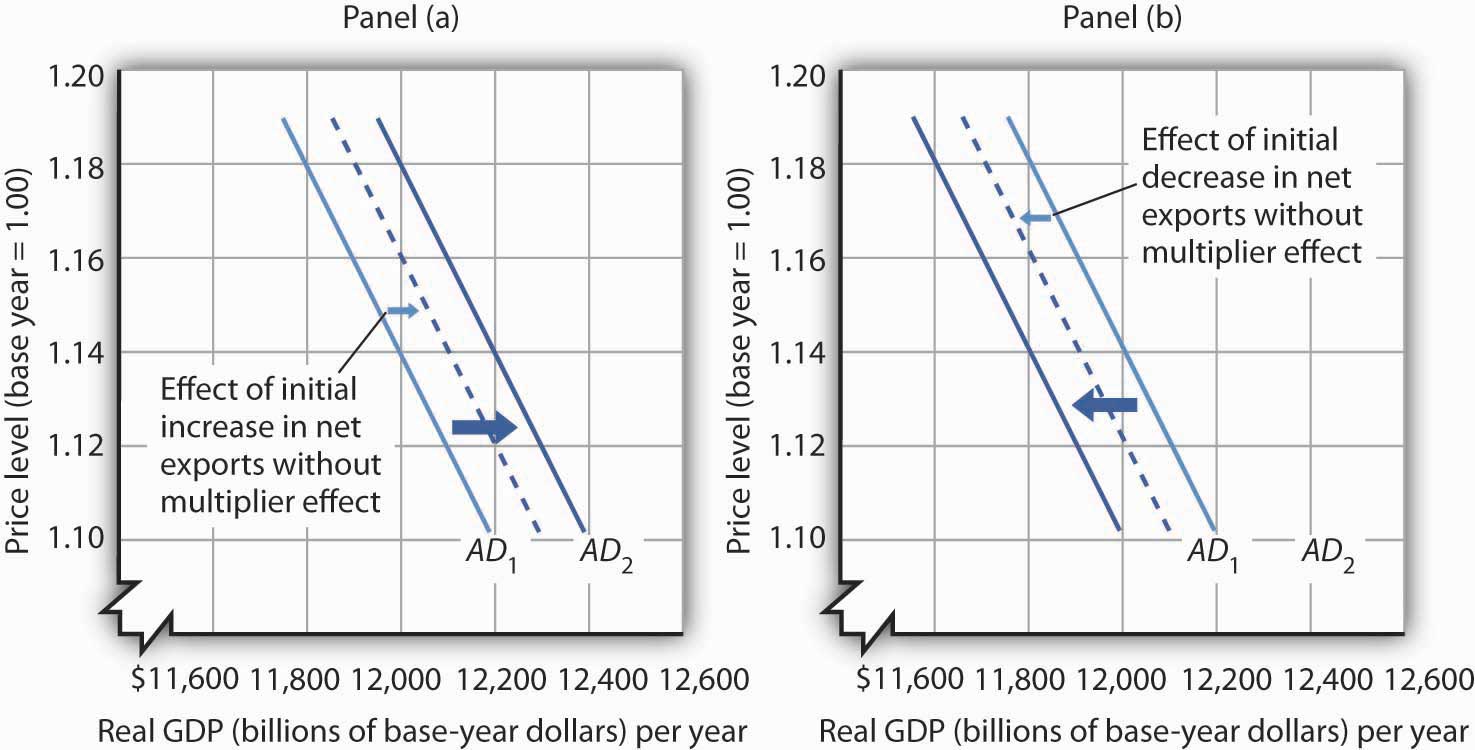 Explain the effect of each of the following on the aggregate demand curve for the United States:

Case in Point: The Multiplied Economic Impact of SARS on China’s Economy 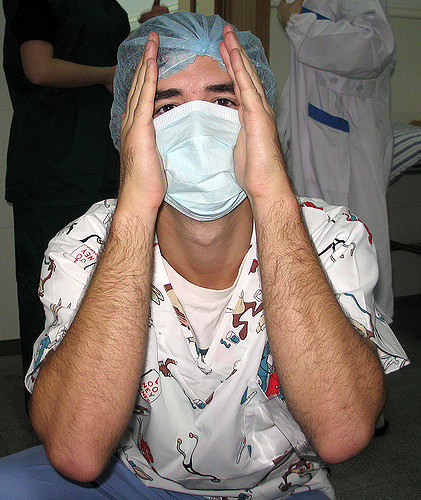 Severe Acute Respiratory Syndrome (SARS), an atypical pneumonia-like disease, broke onto the world scene in late 2002. In March 2003, the World Health Organization (WHO) issued its first worldwide alert and a month later its first travel advisory, which recommended that travelers avoid Hong Kong and the southern province of China, Guangdong. Over the next few months, additional travel advisories were issued for other parts of China, Taiwan, and briefly for Toronto, Canada. By the end of June, all WHO travel advisories had been removed.

To estimate the overall impact of SARS on the Chinese economy in 2003, economists Wen Hai, Zhong Zhao, and Jian Want of Peking University’s China Center for Economic Research conducted a survey of Beijing’s tourism industry in April 2003. Based on findings from the Beijing area, they projected the tourism sector of China as a whole would lose $16.8 billion—of which $10.8 billion came from an approximate 50% reduction in foreign tourist revenue and $6 billion from curtailed domestic tourism, as holiday celebrations were cancelled and domestic travel restrictions imposed.

To figure out the total impact of SARS on China’s economy, they argued that the multiplier for tourism revenue in China is between 2 and 3. Since the SARS outbreak only began to have a major economic impact after March, they assumed a smaller multiplier of 1.5 for all of 2003. They thus predicted that the Chinese economy would be $25.3 billion smaller in 2003 as a result of SARS.