Increasingly, education is the key to a better material life. The gap between the average annual incomes of high school graduates and those with a bachelor’s degree increased substantially over the last half century. A recent study undertaken at the Georgetown University Center on Education and the Workforce concluded that people with a bachelor’s degree earn 84% more over a lifetime than do people who are high school graduates only. That college premium is up from 75% in 1999 (Carnevale, Rose, & Cheah, 2011). Moreover, education is not an equal opportunity employer. A student from a family in the upper end of the income distribution is much more likely to get a college degree than a student whose family is in the lower end of the income distribution.

That inequality perpetuates itself. College graduates marry other college graduates and earn higher incomes. Those who do not go to college earn lower incomes. Some may have children out of wedlock—an almost sure route to poverty. That does not, of course, mean that young people who go to college are assured high incomes while those who do not are certain to experience poverty, but the odds certainly push in that direction.

A Changing Distribution of Income

We have seen that the income distribution has become more unequal. This section describes a graphical approach to measuring the equality, or inequality, of the distribution of income.

The primary evidence of growing inequality is provided by census data. Households are asked to report their income, and they are ranked from the household with the lowest income to the household with the highest income. The Census Bureau then reports the percentage of total income earned by those households ranked among the bottom 20%, the next 20%, and so on, up to the top 20%. Each 20% of households is called a quintile. The bureau also reports the share of income going to the top 5% of households.

Income distribution data can be presented graphically using a Lorenz curve, a curve that shows cumulative shares of income received by individuals or groups. It was developed by economist Max O. Lorenz in 1905. To plot the curve, we begin with the lowest quintile and mark a point to show the percentage of total income those households received. We then add the next quintile and its share and mark a point to show the share of the lowest 40% of households. Then, we add the third quintile, and then the fourth. Since the share of income received by all the quintiles will be 100%, the last point on the curve always shows that 100% of households receive 100% of the income.

If every household in the United States received the same income, the Lorenz curve would coincide with the 45-degree line drawn in Figure 18.1 “The Distribution of U.S. Income, 1968 and 2010”. The bottom 20% of households would receive 20% of income; the bottom 40% would receive 40%, and so on. If the distribution of income were completely unequal, with one household receiving all the income and the rest zero, then the Lorenz curve would be shaped like a backward L, with a horizontal line across the bottom of the graph at 0% income and a vertical line up the right-hand side. The vertical line would show, as always, that 100% of families still receive 100% of income. Actual Lorenz curves lie between these extremes. The closer a Lorenz curve lies to the 45-degree line, the more equal the distribution. The more bowed out the curve, the less equal the distribution. We see in Figure 18.1 “The Distribution of U.S. Income, 1968 and 2010” that the Lorenz curve for the United States became more bowed out between 1968 and 2010.

The distribution of income among households in the United States became more unequal from 1968 to 2010. The shares of income received by each of the first four quintiles fell, while the share received by the top 20% rose sharply. The Lorenz curve for 2010 was more bowed out than was the curve for 1968. (Mean income adjusted for inflation and reported in 2010 dollars; percentages do not sum to 100% due to rounding.)

When we speak of the bottom 20% or the middle 20% of families, we are not speaking of a static group. Some families who are in the bottom quintile one year move up to higher quintiles in subsequent years; some families move down. Because people move up and down the distribution, we get a quite different picture of income change when we look at the incomes of a fixed set of persons over time rather than comparing average incomes for a particular quintile at a particular point in time, as was done in Figure 18.1 “The Distribution of U.S. Income, 1968 and 2010”.

Addressing the question of mobility requires that researchers follow a specific group of families over a long period of time. Since 1968, the Panel Survey of Income Dynamics (PSID) at the University of Michigan has followed more than 5,000 families and their descendents. The effort has produced a much deeper understanding of changes in income inequality than it is possible to obtain from census data, which simply take a snapshot of incomes at a particular time.

Based on the University of Michigan’s data, Federal Reserve Bank of Boston economist Katharine Bradbury compared mobility over the decades through 2005. She concluded that on most mobility measures, family income mobility was significantly lower in the 1990s and early 2000s than in earlier periods. Moreover, when families move out of a quintile, they move less. Finally, she notes that for the recent decades moving across quintiles has become harder to achieve precisely because of the increased income inequality (Bradbury, 2011).

Everyone agrees that the distribution of income in the United States generally became more equal during the first two decades after World War II and that it has become more unequal since 1968. While some people conclude that this increase in inequality suggests the latter period was unfair, others want to know why the distribution changed. We shall examine some of the explanations.

The result has been an increase in the gap between the wages of skilled and unskilled workers. That has produced a widening gap between college- and high-school-trained workers.

Along with new technologies that require greater technical expertise, firms are adopting new management styles that require stronger communication skills. The use of production teams, for example, shifts decision-making authority to small groups of assembly-line workers. That means those workers need more than the manual dexterity that was required of them in the past. They need strong communication skills. They must write effectively, speak effectively, and interact effectively with other workers. Workers who cannot do so simply are not in demand to the degree they once were.

The “intellectual wage gap” seems likely to widen as we move even further into the twenty-first century. That is likely to lead to an even higher degree of inequality and to pose a challenge to public policy for decades to come. Increasing education and training could lead to reductions in inequality. Indeed, individuals seem to have already begun to respond to this changing market situation, since the percentage who graduate from high school and college is rising.

Table 18.1 Income Tax Liability Before and After the Bush Tax Cuts

Tax cuts under George W. Bush were widely criticized as being tilted unfairly toward the rich. And certainly, Table 18.1 “Income Tax Liability Before and After the Bush Tax Cuts” shows that the share of total tax relief received by the first four quintiles was modest, while those in the top quintile garnered more than two-thirds of the total benefits of the three tax cuts. Looking at the second and third columns of the table, however, gives a different perspective. The share of income taxes paid by each of the first four quintiles fell as a result of the tax cuts, while the share paid by the top quintile rose. Further, we see that each of the first four quintiles paid a very small share of income taxes before and after the tax cuts, while those in the top quintile ended up shouldering more than 80% of the total income tax burden. We saw in Figure 18.1 “The Distribution of U.S. Income, 1968 and 2010” that those in the top quintile received just over half of total income. After the Bush tax cuts, they paid 81% of income taxes. Others are quick to point out that those same tax cuts were accompanied by reductions in expenditures for some social service programs designed to help lower income families. Still others point out that the tax cuts contributed to an increase in the federal deficit and, therefore, are likely to have distributional effects over many years and across several generations. Whether these changes increased or decreased fairness in the society is ultimately a normative question.

The method by which the Census Bureau computes income shares has been challenged by some observers. For example, quintiles of households do not contain the same number of people. Rea Hederman of the Heritage Foundation, a conservative think tank, notes that the top 20% of households contains about 25% of the population. Starting in 2006, the Census Bureau report began calculating a measure called “equivalence-adjusted income” to take into account family size. The Gini coefficient for 2010 using this adjustment fell slightly from 0.469 to 0.457. The trend over time in the two Gini coefficients is similar. Two other flaws pointed out by Mr. Hederman are that taxes and benefits from noncash programs that help the poor are not included. While some Census studies attempt to take these into account and report lower inequality, other studies do not receive as much attention as the main Census annual report (Hederman Jr., 2007).

Even studies that look at incomes over a decade may not capture lifetime income. For example, people in retirement may have a low income but their consumption may be bolstered by drawing on their savings. Younger people may be borrowing to go to school, buy a house, or for other things. The annual income approach of the Census data does not capture this and even the ten-year look in the mobility study mentioned above is too short a period.

This suggests that more precise measurements may provide more insight into explaining inequality.

Case in Point: Attitudes and Inequality 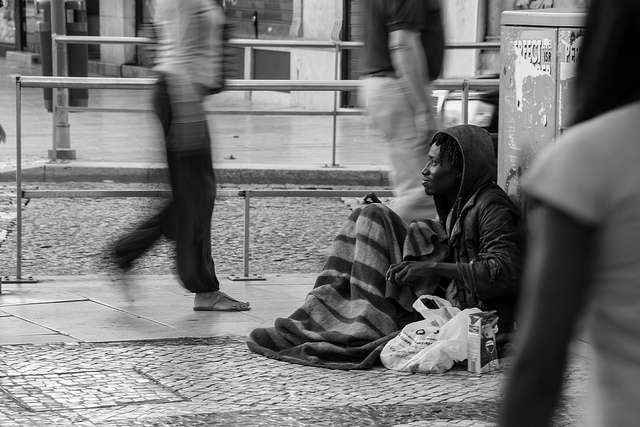 In a fascinating examination of attitudes in the United States and in continental Western Europe, economists Alberto Alesina of Harvard University and George-Marios Angeletos of the Massachusetts Institute of Technology suggest that attitudes about the nature of income earning can lead to quite different economic systems and outcomes concerning the distribution of income.

So, who is right—Americans with their “you get what you deserve” or Europeans with their “you get what luck, connections, and corruption bring you” attitude? The two economists show that people get, in effect, what they expect. European values and beliefs produce societies that are more egalitarian. American values and beliefs produce the American result: a society in which the distribution of income is more unequal, the government smaller, and redistribution relatively minor. Professors Alesina and Angeletos conclude that Europeans tend to underestimate the degree to which people can improve their material well-being through hard work, while Americans tend to overestimate that same phenomenon. 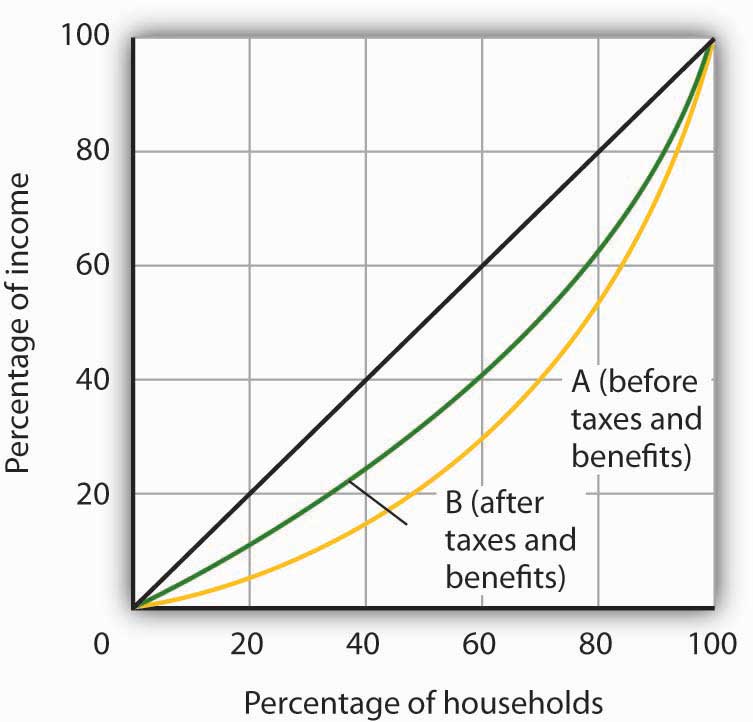