How important is investment? Consider any job you have ever performed. Your productivity in that job was largely determined by the investment choices that had been made before you began to work. If you worked as a clerk in a store, the equipment used in collecting money from customers affected your productivity. It may have been a simple cash register, or a sophisticated computer terminal that scanned purchases and was linked to the store’s computer, which computed the store’s inventory and did an analysis of the store’s sales as you entered each sale. If you have worked for a lawn maintenance firm, the kind of equipment you had to work with influenced your productivity. You were more productive if you had the latest mulching power lawn mowers than if you struggled with a push mower. Whatever the work you might have done, the kind and quality of capital you had to work with strongly influenced your productivity. And that capital was available because investment choices had provided it.

Investment adds to the nation’s capital stock. We saw in the chapter on economic growth that an increase in capital shifts the aggregate production function outward, increases the demand for labor, and shifts the long-run aggregate supply curve to the right. Investment therefore affects the economy’s potential output and thus its standard of living in the long run.

Figure 14.1 “Components of Gross Private Domestic Investment, 1995–2011” shows the components of gross private domestic investment from 1995 through 2011. We see that producers’ equipment and software constitute the largest component of GPDI in the United States. Residential investment was the second largest component of GPDI for most of the period shown but it shrank considerably during the 2007–2009 recession and has yet to recover. 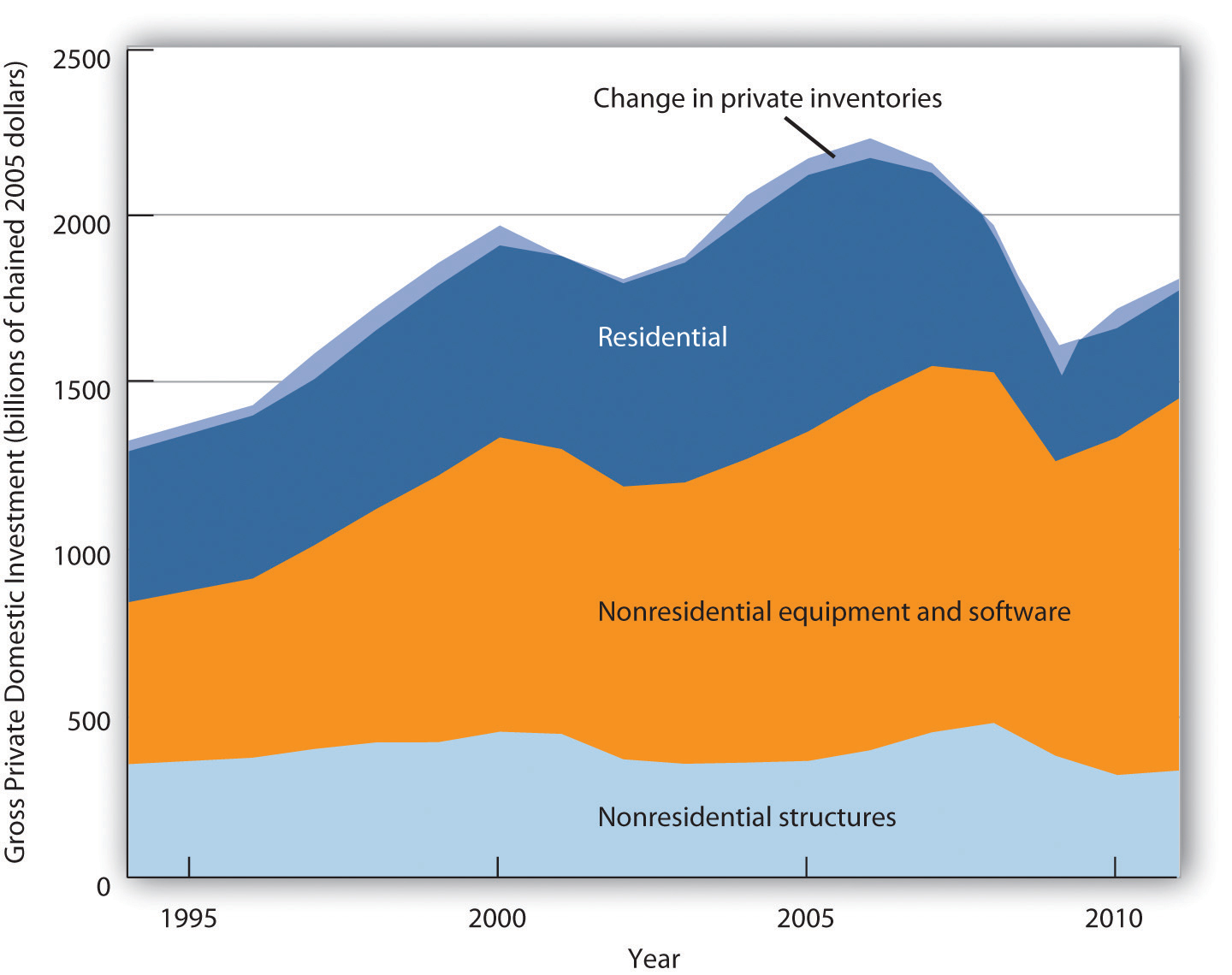 This chart shows the levels of each of the four components of gross private domestic investment from 1995 through 2011. Nonresidential equipment and software is the largest component of GPDI and has shown the most substantial growth over the period.

In the official estimates of total output, gross investment (GPDI) minus depreciation equals net private domestic investment (NPDI). The value for NPDI in any period gives the amount by which the privately held stock of physical capital changed during that period.

Figure 14.2 “Gross Private Domestic Investment, Depreciation, and Net Private Domestic Investment, 1990–2011” reports the real values of GPDI, depreciation, and NPDI from 1990 to 2011. We see that the bulk of GPDI replaces capital that has been depreciated. Notice the sharp reductions in NPDI during the recessions of 1990–1991, 2001, and especially 2007–2009.

The bulk of gross private domestic investment goes to the replacement of capital that has depreciated, as shown by the experience of the past two decades.

The Volatility of Investment 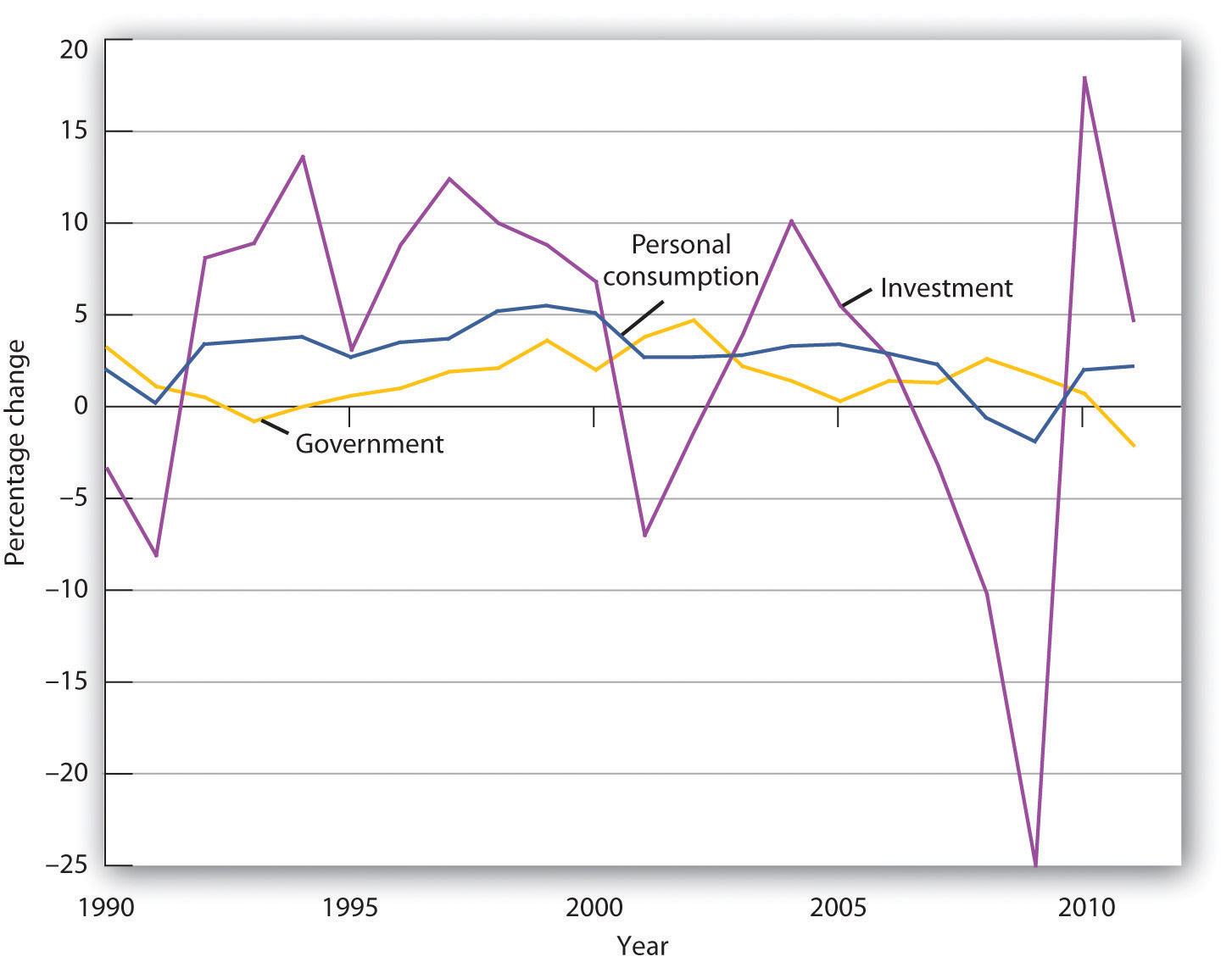 Given that the aggregate demand curve shifts by an amount equal to the multiplier times an initial change in investment, the volatility of investment can cause real GDP to fluctuate in the short run. Downturns in investment may trigger recessions.

Earlier we used the production possibilities curve to illustrate how choices are made about investment, consumption, and saving. Because such choices are crucial to understanding how investment affects living standards, it will be useful to reexamine them here.

Figure 14.4 “The Choice between Consumption and Investment” shows a production possibilities curve for an economy that can produce two kinds of goods: consumption goods and investment goods. An economy operating at point A on PPC1 is using its factors of production fully and efficiently. It is producing CA units of consumption goods and IA units of investment each period. Suppose that depreciation equals IA, so that the quantity of investment each period is just sufficient to replace depreciated capital; net investment equals zero. If there is no change in the labor force, in natural resources, or in technology, the production possibilities curve will remain fixed at PPC1.

Figure 14.4 The Choice between Consumption and Investment 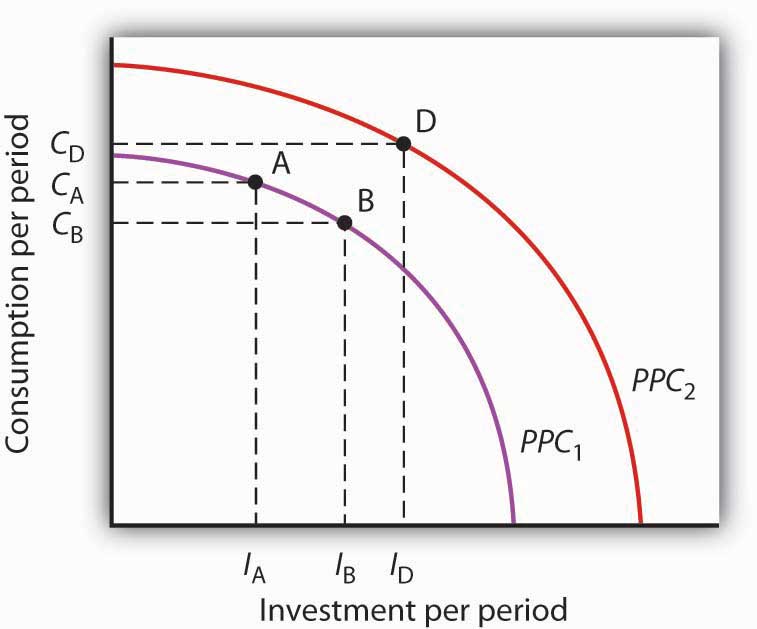 Which of the following would be counted as gross private domestic investment?

Case in Point: The Reduction of Private Capital in the Depression and in the Great Recession 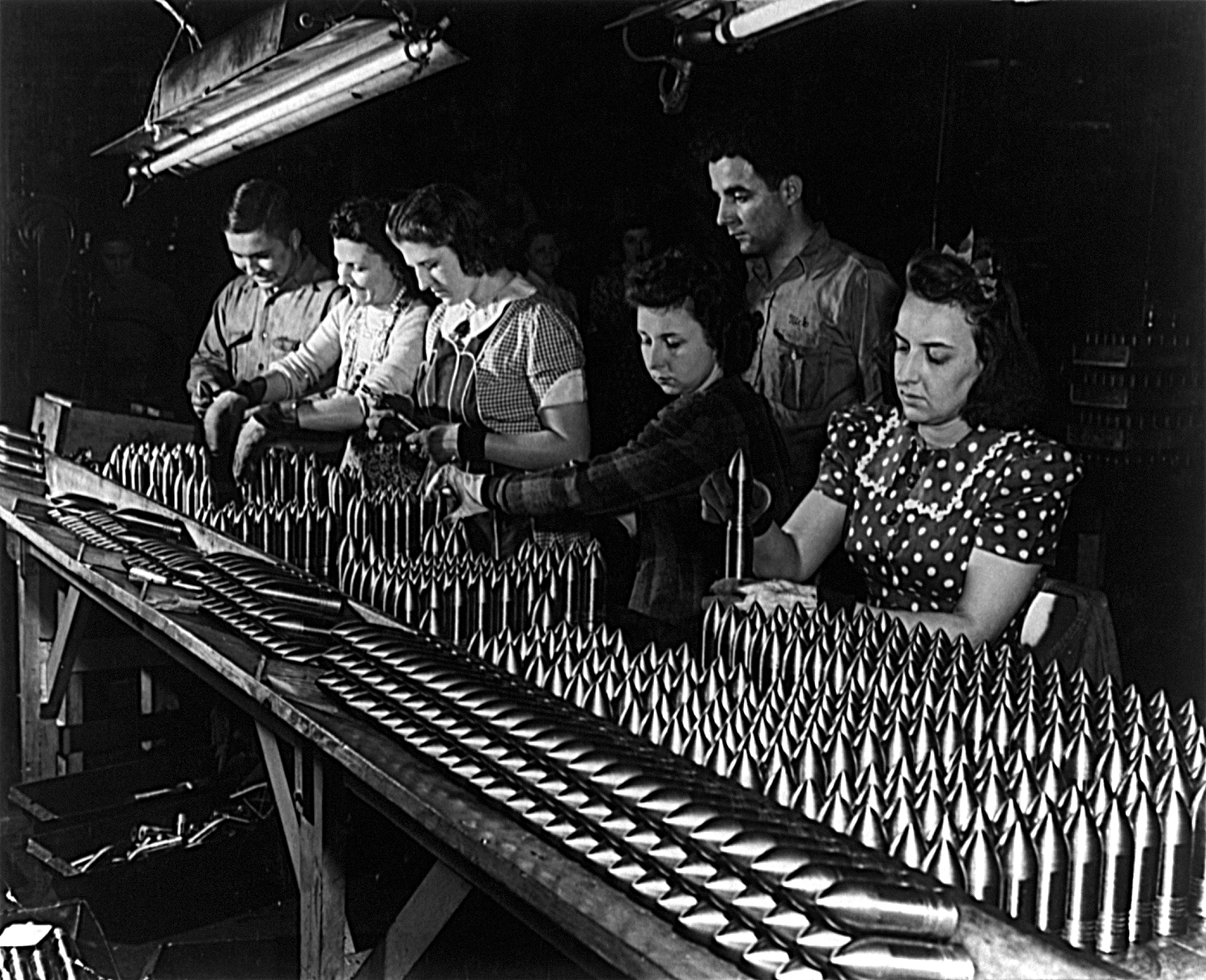 Net private domestic investment (NPDI) has been negative during only three periods in the last 80 years. During one period, World War II, massive defense spending forced cutbacks in private sector spending. (Recall that government investment is not counted as part of net private domestic investment in the official accounts; production of defense capital thus is not reflected in these figures.) The second period in which NPDI was negative was the Great Depression.

Aggregate demand plunged during the first four years of the Depression. As firms cut their output in response to reductions in demand, their need for capital fell as well. They reduced their capital by holding gross private domestic investment below depreciation beginning in 1931. That produced negative net private domestic investment; it remained negative until 1936 and became negative again in 1938. In all, firms reduced the private capital stock by more than $529.5 billion (in 2007 dollars) during the period. 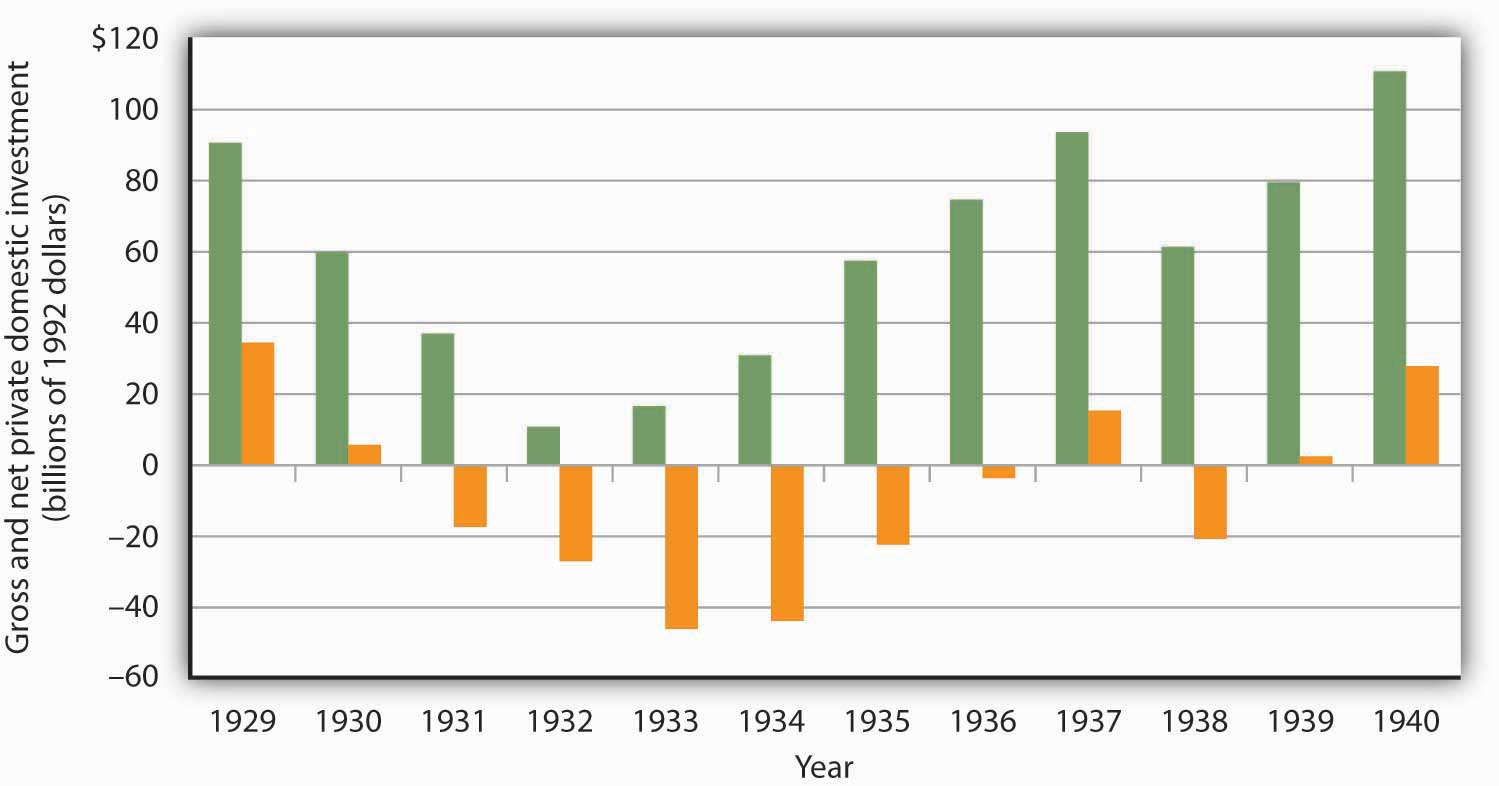 A third—very brief and very small—encounter with negative net private domestic investment occurred in 2009, when it fell by $1 billion (in 2005 dollars). 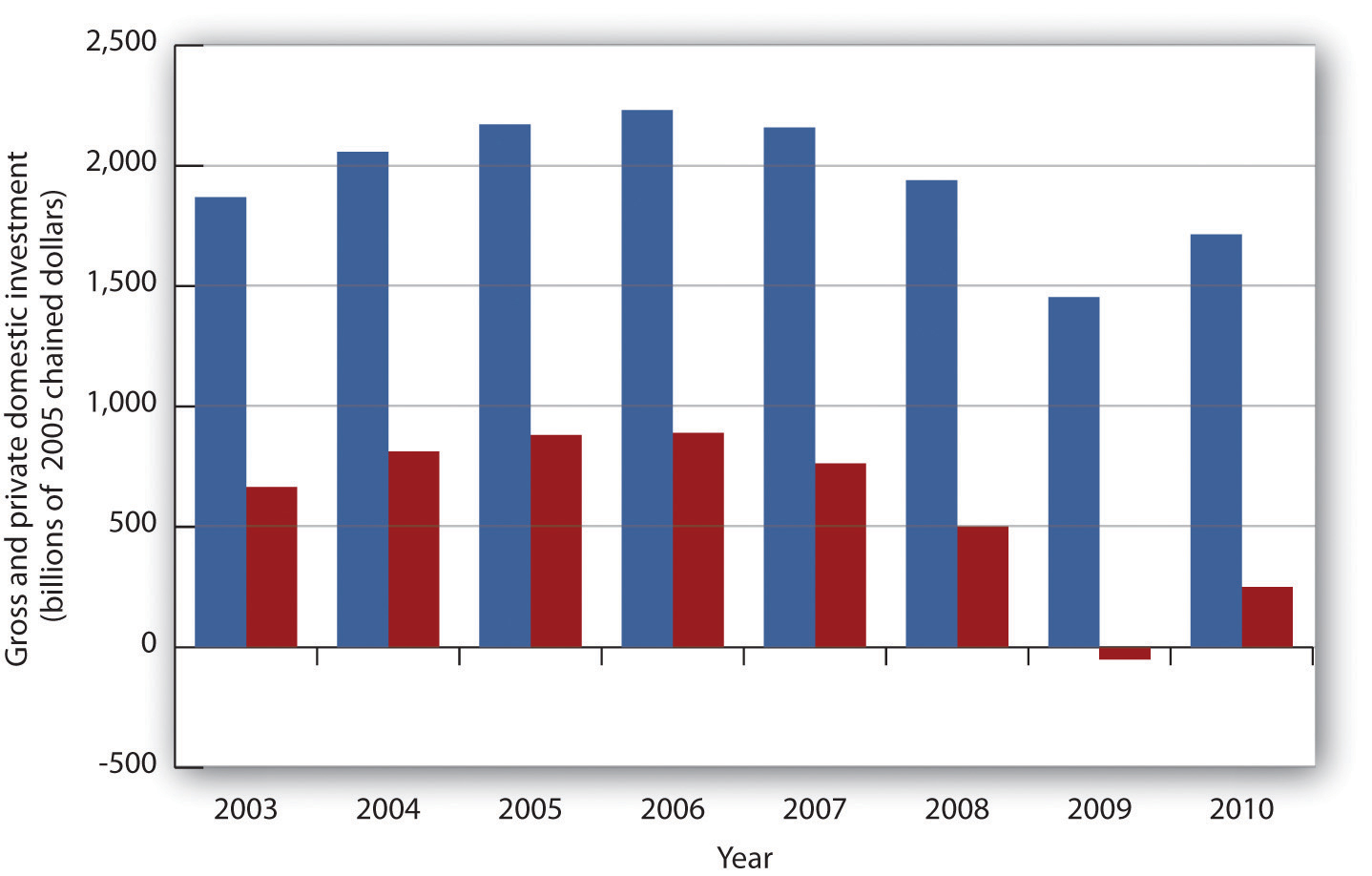