So far we have focused on how monetary policy affects real GDP and the price level in the short run. That is, we have examined how it can be used—however imprecisely—to close recessionary or inflationary gaps and to stabilize the price level. In this section, we will explore the relationship between money and the economy in the context of an equation that relates the money supply directly to nominal GDP. As we shall see, it also identifies circumstances in which changes in the price level are directly related to changes in the money supply.

The Equation of Exchange

We can relate the money supply to the aggregate economy by using the equation of exchange:

The equation of exchange shows that the money supply M times its velocity V equals nominal GDP. Velocity is the number of times the money supply is spent to obtain the goods and services that make up GDP during a particular time period.

Multiplying both sides by real GDP, we have

Letting Y equal real GDP, we can rewrite the equation of exchange as

We shall use the equation of exchange to see how it represents spending in a hypothetical economy that consists of 50 people, each of whom has a car. Each person has $10 in cash and no other money. The money supply of this economy is thus $500. Now suppose that the sole economic activity in this economy is car washing. Each person in the economy washes one other person’s car once a month, and the price of a car wash is $10. In one month, then, a total of 50 car washes are produced at a price of $10 each. During that month, the money supply is spent once.

Applying the equation of exchange to this economy, we have a money supply M of $500 and a velocity V of 1. Because the only good or service produced is car washing, we can measure real GDP as the number of car washes. Thus Y equals 50 car washes. The price level P is the price of a car wash: $10. The equation of exchange for a period of 1 month is

Now suppose that in the second month everyone washes someone else’s car again. Over the full two-month period, the money supply has been spent twice—the velocity over a period of two months is 2. The total output in the economy is $1,000—100 car washes have been produced over a two-month period at a price of $10 each. Inserting these values into the equation of exchange, we have

Suppose this process continues for one more month. For the three-month period, the money supply of $500 has been spent three times, for a velocity of 3. We have

To apply the equation of exchange to a real economy, we need measures of each of the variables in it. Three of these variables are readily available. The Department of Commerce reports the price level (that is, the implicit price deflator) and real GDP. The Federal Reserve Board reports M2, a measure of the money supply. For the second quarter of 2008, the values of these variables at an annual rate were

To solve for the velocity of money, V, we divide both sides of Equation 11.4 by M:

Assume for the moment that velocity is constant, expressed as V¯. Our equation of exchange is now written as

A constant value for velocity would have two important implications:

In short, if velocity were constant, a course in macroeconomics would be quite simple. The quantity of money would determine nominal GDP; nothing else would matter.

Indeed, when we look at the behavior of economies over long periods of time, the prediction that the quantity of money determines nominal output holds rather well. Figure 11.6 “Inflation, M2 Growth, and GDP Growth” compares long-term averages in the growth rates of M2 and nominal GNP for 11 countries (Canada, Denmark, France, Italy, Japan, the Netherlands, Norway, Sweden, Switzerland, the United Kingdom, and the United States) for more than a century. These are the only countries that have consistent data for such a long period. The lines representing inflation, M2 growth, and nominal GDP growth do seem to move together most of the time, suggesting that velocity is constant when viewed over the long run. 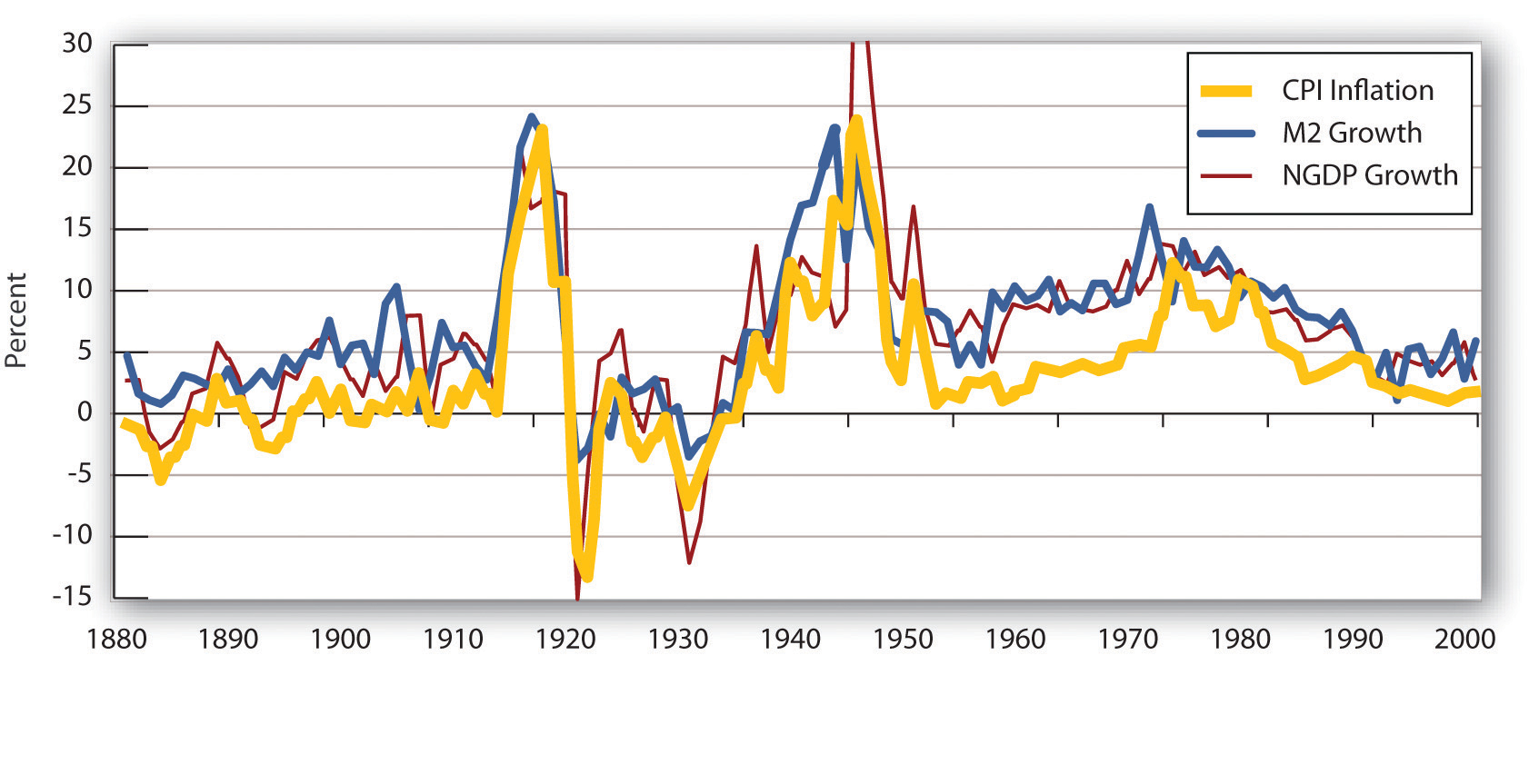 The chart shows the behavior of price-level changes, the growth of M2, and the growth of nominal GDP for 11 countries using the average value of each variable. Viewed in this light, the relationship between money growth and nominal GDP seems quite strong.

Moreover, price-level changes also follow the same pattern that changes in M2 and nominal GNP do. Why is this?

The Greek letter Δ (delta) means “change in.” Assume that velocity is constant in the long run, so that %ΔV = 0. We also assume that real GDP moves to its potential level, YP, in the long run. With these assumptions, we can rewrite Equation 11.7 as follows:

Subtracting %ΔYP from both sides of Equation 11.8, we have the following:

Several recent studies that looked at all the countries on which they could get data on inflation and money growth over long periods found a very high correlation between growth rates of the money supply and of the price level for countries with high inflation rates, but the relationship was much weaker for countries with inflation rates of less than 10%.[1] These findings support the quantity theory of money, which holds that in the long run the price level moves in proportion with changes in the money supply, at least for high-inflation countries.

The stability of velocity in the long run underlies the close relationship we have seen between changes in the money supply and changes in the price level. But velocity is not stable in the short run; it varies significantly from one period to the next. Figure 11.7 “The Velocity of M2, 1970–2011” shows annual values of the velocity of M2 from 1960 to 2011. Velocity is quite variable, so other factors must affect economic activity. Any change in velocity implies a change in the demand for money. For analyzing the effects of monetary policy from one period to the next, we apply the framework that emphasizes the impact of changes in the money market on aggregate demand. 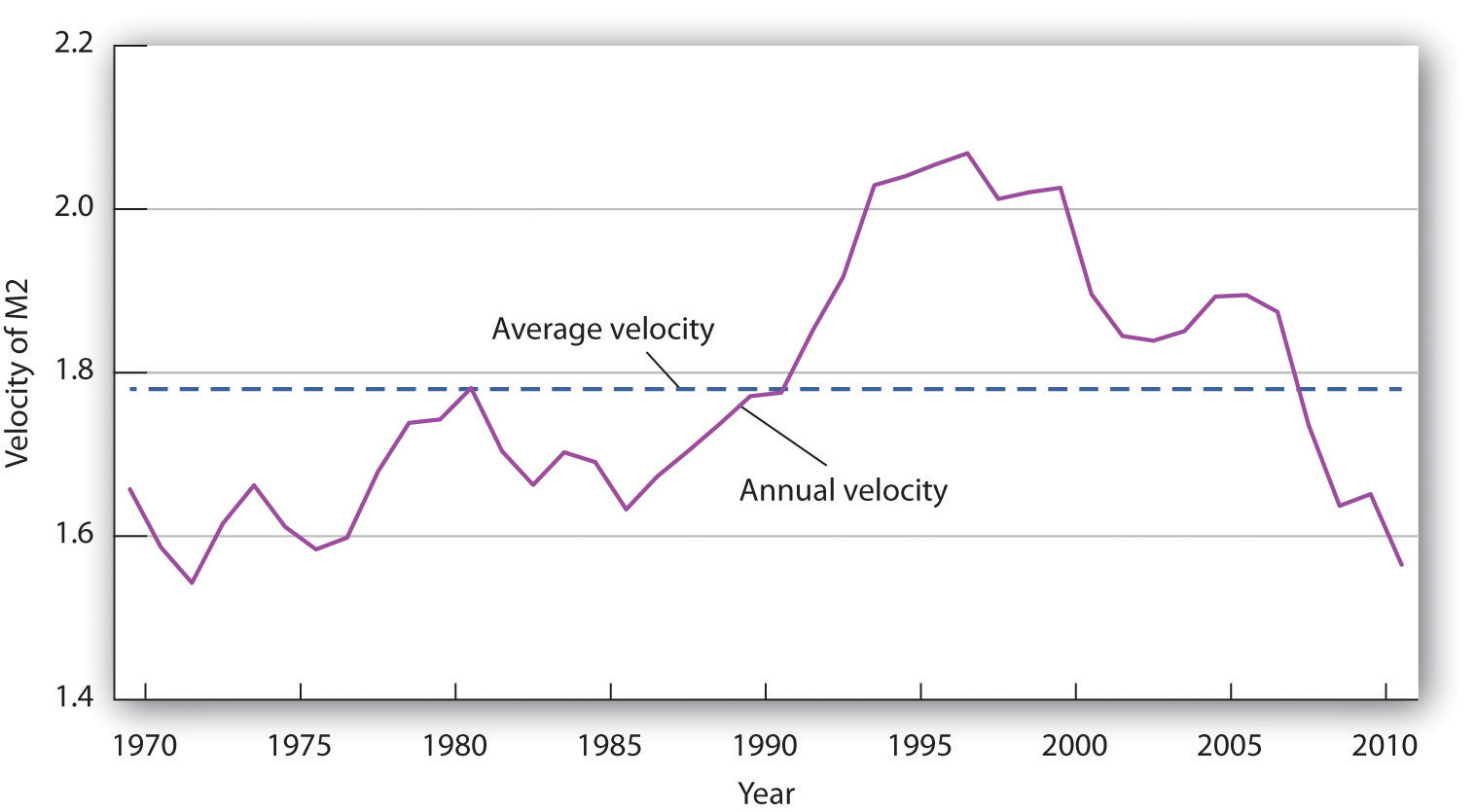 The equation of exchange can thus be rewritten as an equation that expresses the demand for money as a percentage, given by 1/V, of nominal GDP. With a velocity of 1.87, for example, people wish to hold a quantity of money equal to 53.4% (1/1.87) of nominal GDP. Other things unchanged, an increase in money demand reduces velocity, and a decrease in money demand increases velocity.

As another example, in the chapter on financial markets and the economy, we learned that money demand falls when people expect inflation to increase. In essence, they do not want to hold money that they believe will only lose value, so they turn it over faster, that is, velocity rises. Expectations of deflation lower the velocity of money, as people hold onto money because they expect it will rise in value.

Just as we cannot assume that velocity is constant when we look at macroeconomic behavior period to period, neither can we assume that output is at potential. With both V and Y in the equation of exchange variable, in the short run, the impact of a change in the money supply on the price level depends on the degree to which velocity and real GDP change.

In the short run, it is not reasonable to assume that velocity and output are constants. Using the model in which interest rates and other factors affect the quantity of money demanded seems more fruitful for understanding the impact of monetary policy on economic activity in that period. However, the empirical evidence on the long-run relationship between changes in money supply and changes in the price level that we presented earlier gives us reason to pause. As Federal Reserve Governor from 1996 to 2002 Laurence H. Meyer put it: “I believe monitoring money growth has value, even for central banks that follow a disciplined strategy of adjusting their policy rate to ongoing economic developments. The value may be particularly important at the extremes: during periods of very high inflation, as in the late 1970s and early 1980s in the United States … and in deflationary episodes” (Meyer, 2001).

It would be a mistake to allow short-term fluctuations in velocity and output to lead policy makers to completely ignore the relationship between money and price level changes in the long run.

The Case in Point on velocity in the Confederacy during the Civil War shows that, assuming real GDP in the South was constant, velocity rose. What happened to money demand? Why did it change?

Case in Point: Velocity and the Confederacy 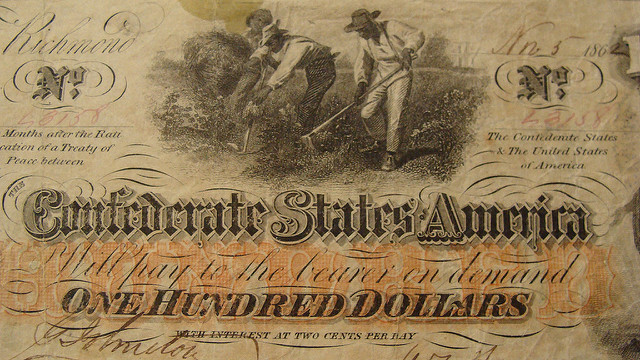 Estimates of real GDP in the South during the Civil War are unavailable, but it could hardly have increased very much. Although production undoubtedly rose early in the period, the South lost considerable capital and an appalling number of men killed in battle. Let us suppose that real GDP over the entire period remained constant. For the price level to rise 92-fold with a 20-fold increase in the money supply, there must have been a 4.6-fold increase in velocity. People in the South must have reduced their demand for Confederates.

An account of an exchange for eggs in 1864 from the diary of Mary Chestnut illustrates how eager people in the South were to part with their Confederate money. It also suggests that other commodities had assumed much greater relative value:

“She asked me 20 dollars for five dozen eggs and then said she would take it in “Confederate.” Then I would have given her 100 dollars as easily. But if she had taken my offer of yarn! I haggle in yarn for the millionth part of a thread! … When they ask for Confederate money, I never stop to chafer [bargain or argue]. I give them 20 or 50 dollars cheerfully for anything.”

People in the South must have reduced their demand for money. The fall in money demand was probably due to the expectation that the price level would continue to rise. In periods of high inflation, people try to get rid of money quickly because it loses value rapidly.