Throughout most of history, poverty has been the human condition. For most people life was, in the words of 17th-century English philosopher Thomas Hobbes, “solitary, poor, nasty, brutish, and short.” Only within the past 200 years have a handful or so of countries been able to break the chains of economic deprivation and poverty.

Clearly, the high standards of living enjoyed by people in the world’s developed economies are the global exception, not the rule. This chapter looks at the problem of improving the standard of living in poor countries.

The World Bank, an international organization designed to support economic development by providing financial assistance, advice, and other resources to poor countries, classifies over 200 countries according to their levels of per capita gross national income. The categories in its 2008 report, as shown in Table 19.1 “World Incomes, Selected Countries”, were as follows:

How does the World Bank compare incomes across countries? The World Bank converts gross national income (GNI) figures to dollars in two ways. One is to take GNI in a local currency and convert using the exchange rate, averaged over a three-year period in order to smooth out the effects of currency fluctuations. This type of comparison can, however, be misleading. A country could have a relatively high standard of living but, for a variety of reasons, a low exchange rate. The per capita GNI figure would be quite low; the country would appear to be poorer than it is.

Ranking of countries, both rich and poor, by per capita GNI differs depending on the measure used. According to the per capita GNI figures in Table 19.1 “World Incomes, Selected Countries”, which convert data in domestic currencies to dollars using exchange rates, the United States ranked fifteenth of all countries in 2007. Using the international dollars method, its rank is tenth. China is ranked at 132 when per capita GNI is based on the exchange rate conversion method but rises to 122 based on the international dollar method.

Low incomes are often associated with other characteristics: severe inequality, poor health care and education, high unemployment, heavy reliance on agriculture, and rapid population growth. We will examine most of these problems in this section. Population growth in low-income nations is examined later in the chapter.

Not only are incomes in low-income countries quite low; income distribution is often highly unequal. Poverty is far more prevalent than per capita numbers suggest, as illustrated by Lorenz curves, introduced in the chapter on inequality, that show the cumulative shares of income received by individuals or groups.

Consider Costa Rica and Panama, two Latin American countries with roughly equivalent levels of per capita GNI (Costa Rica’s was $5,560 and Panama’s $5,510 in 2007). Panama’s income distribution is comparatively less equal, while Costa Rica’s is far more equal. Figure 19.1 “Poverty and the Distribution of Income: Costa Rica versus Panama” compares the 2003 Lorenz curves for Costa Rica and Panama, the most recent year for which the information was available. The 20% of the households with the lowest incomes in Costa Rica had twice as large a share of their country’s total income as did the bottom 20% of households in Panama. That means Costa Rica’s poor were about twice as well off, in material terms, as Panama’s poor.

Figure 19.1 Poverty and the Distribution of Income: Costa Rica versus Panama 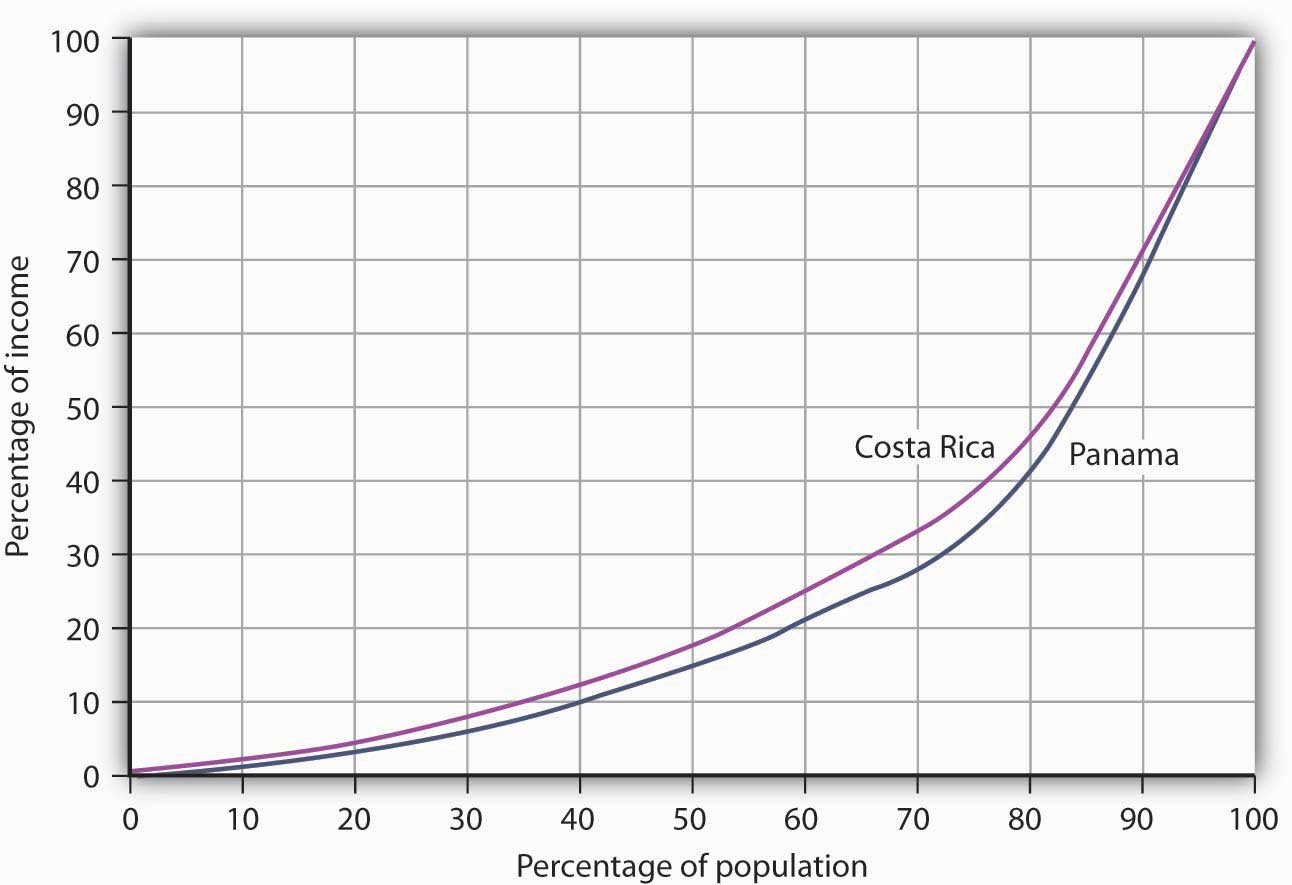 Costa Rica had about the same per capita GNI as Panama in 2003, but Panama’s income distribution was far more unequal. Panama’s poor had much lower living standards than Costa Rica’s poor, as suggested by the Lorenz curves for the two nations.

Poor nations are typically characterized by low levels of human capital. Where health-care facilities are inadequate, that human capital can be reduced further by disease. Where educational resources are poor, there will be little progress in improving human capital.

We can also see the results of poor health care in statistics on health. Among the world’s developing countries, the infant mortality rate, which reports deaths in the first year of life, was 57 per 1,000 live births in 2005. There were six infant deaths per 1,000 live births among the high-income countries that year (United Nations Development Program, 2007).

Another health issue facing the world’s low-income countries is malnutrition. Malnutrition rates in all developing countries in the 2002 to 2004 period averaged 17%, 35% in the least developed countries.

Migration within low-income countries often contributes to unemployment in urban areas. Factors such as ethnic violence, poverty, and drought often force people to move from rural areas to cities, where unemployment rates are already high.

One of the dominant characteristics of poor nations is the concentration of employment in agriculture. Another is the very low productivity of that employment. Agriculture in low-income countries often employs a majority of the population but produces less than one-third of GDP.

One of the primary forces behind income growth in wealthy countries has been the shift of labor out of agriculture and into more productive sectors such as manufacturing. This shift is also occurring in low-income nations but has lagged far behind.

The solution to these problems lies in economic development, to which we turn next.

If the problems of low-income nations are pervasive, the development that helps to solve those problems must transform the very nature of their societies. The late Austrian economist Joseph Schumpeter described economic development as a revolutionary process. Whereas economic growth implies quantitative change in production processes that are already familiar to the society, economic development requires qualitative change in virtually every aspect of life.

Robert Heilbroner, an economist at the New School for Social Research in New York, has argued,


“Economic development is political and social change on a wrenching and tearing scale. … It is a process of institutional birth and institutional death. It is a time when power shifts, often violently and abruptly, a time when old regimes go under and new ones rise in their places. And these are not just the unpleasant side effects of development. They are part and parcel of the process, the very driving force of change itself” (Heilbroner, 1970).

Economic development transforms a nation at its core. But what, precisely, is development? Many definitions follow Heilbroner in noting the massive institutional and cultural changes economic development involves. But whatever the requirements of development, its primary characteristics are rising incomes and improving standards of living. That means output must increase—and it must increase relative to population growth. And because inequality is so serious a problem in low-income nations, development must deliver widespread improvement in living conditions. It therefore seems useful to define economic development as a process that produces sustained and widely shared gains in per capita real GDP.

Table 19.2 “Human Development Index, Gender Development Index, and Human Poverty Index” shows the HDI, the GDI rank, and the HPI for selected countries, by HDI rank. The HDI is constructed to have an upper limit of 1. Canada’s HDI is 0.96; the United States’ is 0.95. As the table shows, the HDIs for developing countries range from 0.87 in Argentina to 0.34 in Sierra Leone. The greater the difference between the HDI and the GDI of a country, the greater the disparity in achievement between males and females in the country. Countries can have similar HDIs but different GDIs or HPIs. By looking at a variety of measures, we come closer to examining the extent to which the gains in income growth have been shared or not.

Provided below is information about two low-income developing countries in Western Africa, Côte d’Ivoire, and Guinea. Use the information to plot their Lorenz curves for consumption, which are similar to Lorenz curves for income distribution, discussed in the chapter on inequality, poverty, and discrimination. Then, based on the material in this section, contrast the concept of economic growth, as discussed in the chapter on that topic, with the concept of economic development, the subject of this chapter. Which of the two countries do you believe fits better the definition of development? Explain.

The 1971 Nobel laureate in economics, Simon Kuznets, hypothesized that, at low levels of per capita income, increases in income would lead to increases in income inequality. The Kuznets hypothesis was later extended to include concern that early growth might not be associated with improvements in other aspects of development, such as those measured by the HDI or HPI. The rationale for growth pessimism was that the structural changes that often accompany early growth—such as rural–urban migration, occupational changes, and environmental degradation—disproportionately hurt poorer people.

The passage of time and the availability of more information on developing countries’ experiences allow us to test whether such pessimism is warranted. The results of a recent study of 95 decade-long episodes of economic growth and decline around the world show that the distribution of income can go either way. Clearly, as the table below shows, with the direction of change in the distribution of income split almost 50-50 during periods of growth, there is no longer any reason to think that growth necessarily increases income inequality. As the table also shows, by a ratio of 7 to 1, the income of the poor usually improves during periods of growth. This means that even when inequality increases, the poor usually gain in absolute terms as income grows.

There were only seven periods of income decline included in the study, but, in general, during those periods the distribution of income grew more unequal and the incomes of the poor fell.

Broad-based measures of development, such as the HDI and the HPI, have not been calculated for a long enough period to allow us to see the trend in these social indicators of development, but we can look at various aspects of human development and poverty over time. As shown in the graphs accompanying this case, there have generally been improvements in the percentage of people with access to safe water, in the adult literacy rate, and in the percentage of underweight children under age 5. On this last indicator, the improvement in Sub-Saharan Africa is very small, but keep in mind that the rate of growth of real GNP per capita in this region has been just over 1% per year.

There is no guarantee that economic growth will improve the plight of the world’s poor—there is indeed wide variation in individual countries’ experiences. In general, though, economic growth makes most people, including most poor people, better off. As former World Bank Senior Vice President and Chief Economist Joseph Stiglitz put it, “Aggregate economic growth benefits most of the people most of the time; and it is usually associated with progress in other, social dimensions of development.” 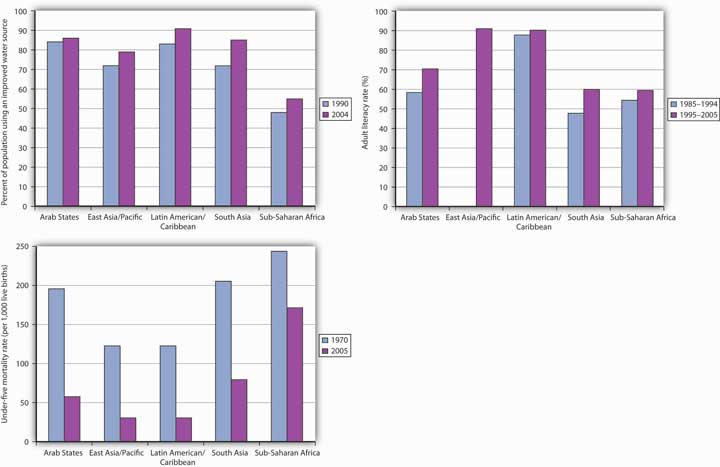 Economic growth refers to the process of increasing a country’s potential output. Graphically, this can be represented by rightward shifts in the long-run aggregate supply curve or by the shifting outward of the production possibilities curve. The challenge of economic development, however, is for countries to move toward their level of potential output and to achieve widely shared gains in GDP per capita. This process usually involves widespread structural changes in the way people live—their standards of living, the kinds of jobs they have, their health, and so forth. When comparing Côte d’Ivoire and Guinea, for example, it is clear that the distribution of consumption is much more equal in the former. This implies that Côte d’Ivoire is coming closer to generating widely shared gains in per capita real GDP. 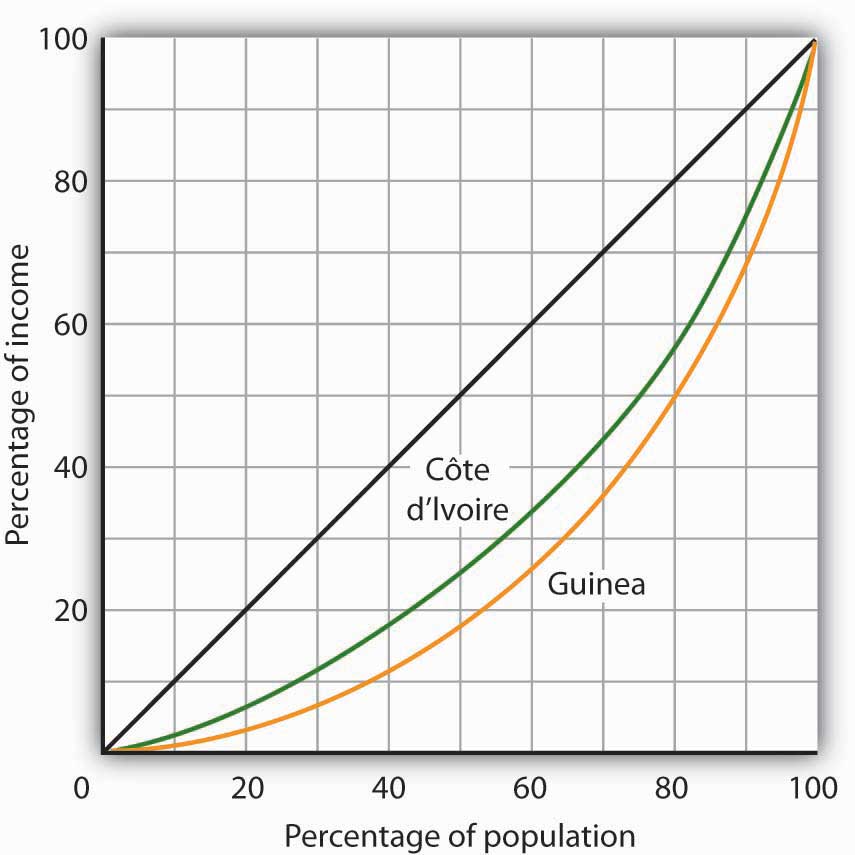 The World Development Report 2006 (New York: Oxford University Press, 2006), xiv, comments on this usage: “The term developing countries includes low- and middle-income economies and thus may include economies in transition from central planning, as a matter of convenience. The term advanced countries may be used as a matter of convenience to denote high-income economics.”