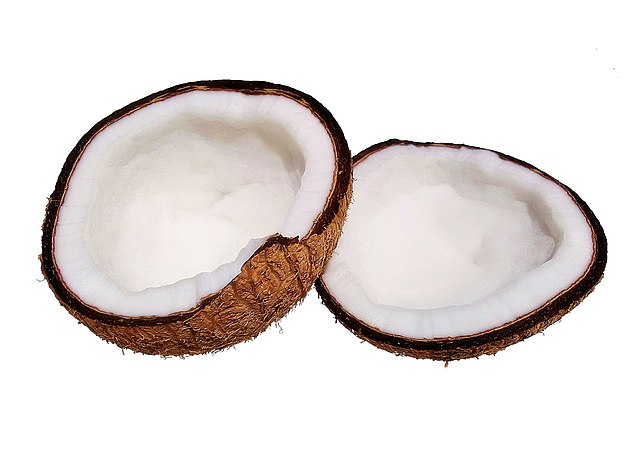 Why a coconut? Because inside the coconut’s fibrous husk is a seed (image: Coconut. Filo gèn. CC BY-SA 4.0).

By the end of this lesson you will be able to:

To review, the two fundamental ways of propagating plants and how they differ in their outcomes are sexual reproduction through seeds or spores, and asexual or vegetative reproduction through manipulation of various plant parts, including cuttings from leaves, roots, and stems, or grafting.

Asexual reproduction, also called vegetative propagation, normally results in progeny (offspring) that are an exact genetic copy of the parent plant that donates the vegetative parts used in propagation. All of the progeny propagated from the same plant contain the same genes as the parent plant, and the progeny are also identical to each other. Differences among progeny or between parent and progeny may arise as a result of mutation, but this is rare. More likely, any differences among plants that have been asexually propagated from the same parent occur because the growing environment differs from plant to plant in some important way (fertility, water, light). The way the plant looks and performs in a particular environment is called its . The collection of genes the plant contains is called its . Vegetative propagation results in identical genotypes, but two plants with identical genotypes may have different phenotypes if they are grown in contrasting environments.

Sexual reproduction, and the genetically variable progeny that result, give a plant species a great deal of flexibility to adapt to new habitats and environmental conditions. Some progeny might be extremely well adapted to new niches and can thrive there, while some will not fit and will not survive and reproduce. To assist the species in spreading, the seeds of the plants that successfully reproduce often have strategies for dispersal away from the parent plant. This spread the species to diverse locations and new ecological niches, and also reduces the likelihood of too many plants of the same species competing with each other in a limited space for the same scarce resources.

Seed formation is normally assumed to be the result of sexual reproduction rather than vegetative propagation. In rare cases, however, an can develop solely from maternal tissue with no fusion of egg and sperm. This is called . Apomixis is really a form of asexual reproduction disguised as sexual reproduction. The process results in a seed, but the embryo in the seed isn’t the result of sex — the fusion of male and female gametes. All of the progeny are identical to the parent because the embryo is actually a clone (genetically identical offspring) of the plant on which the seed is produced. Kentucky bluegrass reproduces this way, as does dandelion. It is ironic that our lawns are often inhabited by two apomictic species … the Kentucky bluegrass we struggle to grow, and the dandelions many homeowners go to great extremes to eradicate.

Propagation of the plant

This is accomplished by the embryo, which is the nascent (new, young) plant resulting from the combination of genes from the male sperm, transmitted by the pollen, to the female egg, held in an ovule in the ovary. The embryo has an axis with one end differentiating into the shoot and the other into the root.

Two types of structures can store nutrients in the seed — the and the . The nutrients fuel growth of the embryo.

The embryo and nutrient source need a tough covering for protection from the environment and predators, and this is typically, but not always, provided by a structure called the (sometimes called the testa).

The drawing above shows a simple cross section of a kidney bean seed (a dicot, but only showing one cotyledon), illustrating these three functions. The kidney-shaped part is the outline of the cotyledon, the main mass of the bean seed and the site of stored nutrients. Sandwiched between the cotyledon halves is the embryo, which is the nascent plant. On the outside of the cotyledon is a thin layer that is the protective seed coat. The kidney bean seeds we see in the grocery store have a seed coat that typically has a light or dark maroon color. In peanuts, the different structures are easy to see when you pull the two cotyledons apart.

First function: Propagation of the plant by the embryo

At the tip of the epicotyl is the shoot apical meristem that will produce new nodes and internodes. If you’re counting nodes on the embryonic axis, the first node on the stem starting from the point of transition of root to shoot is the point where the cotyledons attach. The cotyledons are actually embryonic leaves. The second node is where the plumule is attached.

At the tip of the radicle is the root apical meristem that will produce the primary root.

Double fertilization and the endosperm

In flowering plants (angiosperms), there is a phenomenon called “.” The angiosperm pollen grain holds two sperm cells. One fertilizes the egg, and the resulting zygote grows to become the embryo. The other unites with two other maternal nuclei, called polar bodies, and these three nuclei together grow to become a tissue called endosperm (like the meat and milk of the coconut). This will be covered in more detail when we study meiosis and gametogenesis. For now, remember that in flowering plants there is a process called double fertilization that results in an embryo and an endosperm.

In grasses, like the corn in the illustration above, the endosperm is the major energy and nutrient storage tissue. This is different from the kidney bean, where the cotyledon is the storage organ. There is a cotyledon in the corn seed as well, but instead of storing energy and nutrients, it helps break down, absorb, and transfer the energy and nutrients stored in the endosperm to the embryo. Also in many monocots, there is a sheath covering the plumule and epicotyl that provides protection. This sheath is called the . A similar sheath covers the radicle, and is called the coleorhiza. Coleoptile and are terms used specifically with plants in the grass family (Poaceae), and not in other families within monocots. Both function in providing protection to the emerging shoot and root. In the corn seed, the three functions of 1) propagation, 2) protection, and 3) nutrition are satisfied by the:

Among flowering plants, energy and nutrients can be stored in the seed in the:

What types of energy and nutrients are stored in these tissues? Think about the seeds you eat, and you can probably name many of these nutrients.

Plant oils, called , are compact molecules for storing energy in a more compact way than in starch and sugar.

Nutrient differences between monocots and dicots (legumes in particular)

As noted above, seeds with two cotyledons tend to have cotyledons whose function is storage. Legumes (Fabaceae family) like beans, peas, soybeans, and lentils are dicots that tend to store large amounts of protein in their cotyledons. Some legumes have high protein, high lipid, and low carbohydrates (like soybean and peanut); these are called oilseeds because they have high lipid content and oil can be squeezed or otherwise extracted from them. Others have high protein, low lipid, and high carbohydrate (like pea and bean), and these are called pulse crops. Pulse crops are hugely important foods because they are edible protein sources. They are a key source of protein in vegetarian diets.

Monocots have a cotyledon too, but as noted earlier the cotyledon is primarily used for absorption. In cereals the endosperm stores the nutrients, which tend to be primarily starch and sugar and low amounts of protein and oil.

As a rule, legume seeds are high protein (and in some cases like soybean and peanut high oil), while cereal grains like corn, wheat, oats, barley, and rice are high in starch.

Seeds have two layers of protection:

The line drawing of a flower cross-section, right, shows sepals, petals, stamens (made up of a filament and anther), and carpel or pistil (made up of stigma, style, and ovary). Also identified are the ovary wall and the ovule wall. The ovary is at the base of the carpel and holds the ovules. The ovules are protected by the ovary and hold the egg. When the flower is fertilized, a pollen tube germinates from the pollen grain and grows into the stigma and down through the style. The sperm follows the pollen tube into the ovary. One sperm unites with the egg and the resulting zygote becomes the embryo. The other sperm unites with two polar nuclei to form the endosperm. This is the double fertilization noted earlier.

As the seed matures, the cells inside the ovule multiply and grow. The ovule wall, which is made up of maternal cells called integument tissue, matures to become the seed coat. An example of a seed coat is the red or tan “skin” on a peanut. The ovary wall (note the important difference between the words “ovule” and “ovary”) matures into the protective cover called the pericarp. Again using peanut as an example, the pericarp is the “shell” of the peanut. So peanuts-in-the-shell are an example of a pericarp (shell, ovary wall tissue) and a seed coat (skin, ovule wall tissue) protecting the cotyledons and embryo within the seed.

In contrast, when corn matures, the ovule wall smashes up against the ovary wall as the cells inside multiply and enlarge. The ovule wall cells disintegrate, so at maturity there are only remnants of the seed coat. The ovary wall matures into the pericarp of the corn seed, which is the hard exterior of the seed.

These words belong together:

You might be interested to know that you are probably wearing integument/seed coat tissue right now. The fine fibers attached to the outside of cotton seeds are made up of long chains of single cells of integument tissue and are extensions of the seed coat. These fibers are removed from cotton seeds, spun into a fiber, and woven into fabric.

Physical appearance of an organism.

Genetic composition of an organism.

Nascent (new, young) plant resulting from the combination of genes from the male sperm transmitted by the pollen to the female egg held in an ovule in the ovary.

A form of clonal reproduction where vegetative cells in the flower develop into zygotes to form seeds.

An embryonic leaf in seed-bearing plants, one or more of which are the first leaves to appear from a germinating seed.

Outer layer of the seed.

First true leaves of the plant and emerge from the seed, rise above the soil surface, and start to collect energy from the sun.

Protective sheath that covers in the plumule and epicotyl in the Poaceae family.

Protective sheath that covers the radicle in the Poaceae family.

One of the three major types of nutrients found in seeds; they provide energy in the form of starch and sugar.

Sources of amino acids for production of enzymes and other nitrogen-rich compounds in the seed.

Another name for lipids.

Fatty acids that have no double bonds in the chain with all carbon atoms in the interior of the chain having 2 attached hydrogen atoms.

Ripened ovary wall and it is made-up of three parts: exocarp, mesocarp, and endocarp.