By the end of this lesson, you will be able to:

How plants respond to hormones

The five major groups of plant hormones — auxins, cytokinins, gibberellins, ethylene, and abscisic — acid are distinguished by their chemical structures and the response they evoke within the plant (see Table 4.1). For any cell to respond to a hormone it must be competent to perceive the chemical. Some cells simply lack the ability to “see” the hormone and do not respond to its presence. Competency to perceive a hormone depends on a cell’s physiology when the hormone is present. If the hormone is perceived, its unique chemical structure causes a chain reaction or signal transduction that involves changes in gene expression and cell morphology. These cellular responses to hormones can lead to changes we see in the plant, such as movement towards light, a transition from vegetative growth to flowering, or the closing of leaf stomata due to drought stress.

The perception of the hormone occurs in cells and throughout a tissue or organ, depending on where the hormone is located, the concentration of the hormone, and the developmental state and physiological condition of the cell. Many cells within a tissue can respond in a coordinated manner, resulting in changes in the whole plant. Hormones are often made in one cell and translocated to other cells where they are perceived, and the response may occur far away from the site of hormone synthesis. Responses to hormones are studied through exogenous application of the chemical to a plant tissue — the hormone is applied to the outside (exo) of the plant and observations are made on how the plant responds. For hormones that are a gas, like ethylene, this means the hormone can be translocated from one plant to another plant. The plants are essentially talking to one another, using a wide variety of molecules.

Experiments in which hormones are exogenously applied to a plant reveal how plants respond to hormones; much of our knowledge about the role hormones play in plant growth is from this type of experiment. Whenever a hormone is exogenously applied, however, it is also interacting with all of the hormones  present in the plant. These are endogenous hormones (endo means internal), and the cell responds according to the sum of all hormones in its presence. This can complicate the interpretation of responses to exogenous hormone applications.

The hormones used in plant propagation can be naturally occurring and found in many plants, or can be synthetic or synthesized to mimic the structure and response of a naturally occurring hormone. Synthetic hormones are often used instead of naturally occurring versions because they are less expensive to obtain, may cause greater or longer lasting responses, and can be less susceptible to degradation in the plant and during storage. Because exogenous application of hormones play a role in manipulating or disrupting plant growth, they are used extensively as herbicides (weed killers) and can be targeted to certain types of plants based on how certain species respond to the different structure.

Plant responses to hormones and their application in plant propagation

Auxins are a group of related molecules that are involved in almost every aspect of the plant’s life cycle. Auxins stimulate growth through cell elongation, which is integral to the plant’s responses to environmental changes. Auxins are responsible for two types of growth responses: phototropism, the bending or growth of a shoot toward light, and gravitropism, a change in growth occurring after a change in gravitational force. The diagram below shows indoleacetic acid (IAA, illustrated with pink dots), a naturally occurring auxin, moving from the sunny to the shady side of a shoot tip. The differential accumulation of auxin on the shady side of the shoot causes those cells to increase growth and bends the shoot tip toward the light. Auxin’s stimulation of cell growth is also important in healing wounds and forming calluses after pruning.

The ability of auxin to regulate growth can be turned against weeds (plants out of place). The synthetic auxin 2,4-dichlorophenoxyacetic acid, or 2,4-D, is a common herbicide that interrupts normal growth regulation when applied to the plant, causing leaf drop and death. Because dicotyledonous (dicot) plants have a higher competency to respond to 2,4-D, 2,4-D can be used as a selective herbicide to kill dicot weeds in lawns and corn fields, which are resistant, monocotyledonous (monocot) grasses. The grass is unharmed due to its lower competency to respond, while the dicot plants are killed.

In general, auxins are produced in the young leaves of a plant and translocated downward to older tissues. This downward translocation controls apical dominance, where growth of axillary buds is suppressed. Removal (pinching) of the shoot tip where auxin is being produced, as shown in the three photos of mint below, releases the axillary buds from apical dominance and they begin to grow. This is a common horticultural practice, increasing branching and flower production. Pinching is often used in seedling plants such as basil or zinnias to get globe forms in a pot instead of tall, single-stemmed plants.

One of the most important uses of auxin in plant propagation is to stimulate the growth of adventitious roots — roots that emerge from anywhere on the plant other than from the roots — on shoot cuttings. The photo below shows cuttings from two different Acer ginnala (Amur maple) plants that have different competencies to form adventitious roots. Both cuttings were treated with auxin, but only the competent plant forms adventitious roots (on the left). The cutting from a plant that lacks competency to respond to auxin did not form roots (right) and will eventually die.

This form of asexual (clonal) propagation is used by both horticultural professionals and hobbyists. The competency for rooting cuttings can be species specific or seasonal. Collecting stems from a plant to use for cuttings can be more successful in the growing season, as with the Amur maples shown above. With plants such as grapes, however, cuttings are made and rooted during the winter when the vines are not actively growing. The video below demonstrates how shoot cuttings are taken from Amur maples, treated with auxin, and incubated in a high-humidity environment for several weeks to form adventitious roots. Exogenous application of auxin is not required for adventitious rooting of all plants. Some plants can form many adventitious roots without exogenous applications, because the endogenous auxin that occurs naturally in the shoot is sufficient for root formation.

Like auxins, cytokinins are a group of related molecules that regulate growth and development. However, the plant’s response to cytokinin is very different from the responses to auxin. Cytokinin comes from the word cytokinesis, which means cell division. You will learn about cytokinesis, specifically mitosis, in Chapter 13.

Cytokinins have an interesting interaction with auxin in plants. In the 1950s, Skoog and Miller were researching the growth of N. tabacum stems in tissue culture. They discovered that they could use specific ratios of an auxin (IAA) and a cytokinin (kinetin) to direct the growth of the stem tissue in culture. A high ratio of cytokinin relative to auxin led to shoot formation, a higher level of auxin led to root formation, and equal levels of each produced callus growth, which is undifferentiated plant cell growth. Skoog and Miller’s transformational discovery formed the basis of the “MS” plant medium that remains popular for plant propagation using tissue culture.

Watch this video to learn more about the propagation of plants in synthetic media with exogenous hormones in tissue culture.

Gibberellins, or gibberellic acid (GA), are a group of over 100 molecules that are primary regulators of stem elongation and seed germination. They were discovered during research on the cause of the “foolish seedling” disease of rice. The disease, characterized by tall plants with little grain, is caused by an infection with Gibberella fujikora, a parasitic fungus that produces GA in the rice shoots, causing increased stem elongation.

In Chapter 9.2, on seed physiology, you will learn that some seeds are dormant and do not germinate even when the proper environment is provided. Seed dormancy, which has several causes and evolutionary advantages, always has the common feature of preventing seed germination until the time, season, or seed physiology is correct. Planting a dormant seed or a dead seed gives the same result: no germination. For plant propagators, dormancy can be confusing, raising the question “are my seeds dead or are they dormant?” Either condition prevents germination and plant propagation. Treating seeds with GA is a common method to break dormancy and facilitate germination. GA treatment of Gentiana lutea (bitter root) seeds, for example, increases germination from 0% (no germination) to over 80% when treated with 100 parts per million (ppm) GA (see the graph of germination on the left). If a propagator of G. lutea had not known about seed dormancy, they may have assumed their bitter root seeds were dead. For most plants, GA is the endogenous hormone that triggers seed germination. 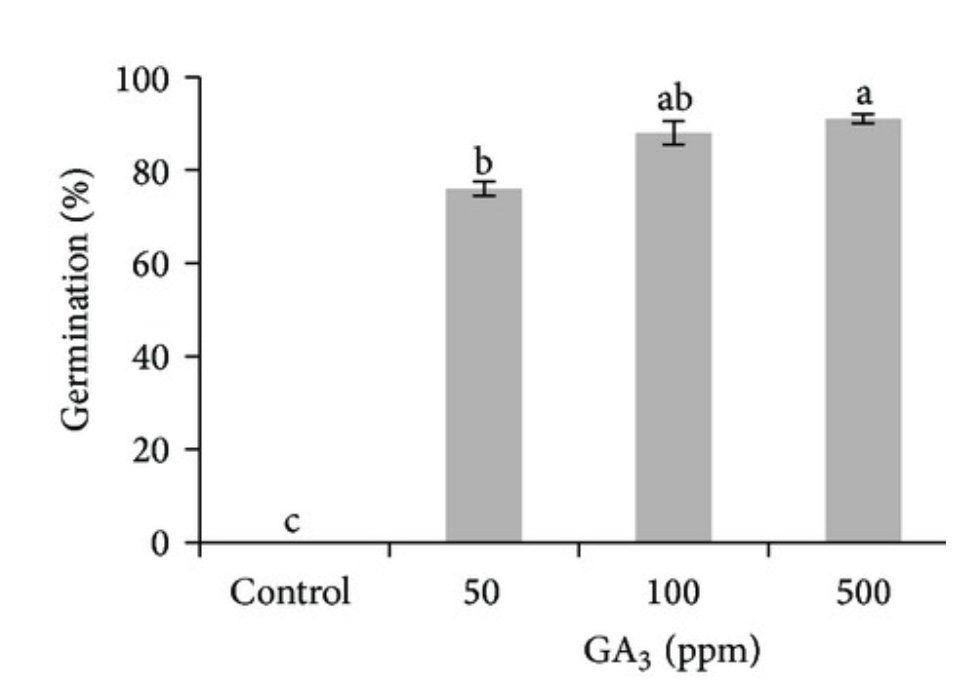 While GA facilitates seed germination, abscisic acid (ABA) inhibits it. Abscisic acid is a single molecule that regulates germination and the response of a plant to reduced water availability during drought stress. ABA levels increase as water becomes less available to the plant, evoking several responses, including the closing of stomates. Closing stomata slows transpiration (also called evapotranspiration), the movement of water in the plant from the root to stem to leaf and out through the stomata into the atmosphere. You’ll read more about stomata and the movement of water in Chapter 11, Plants and water.

Reducing water content is one of the final steps in seed maturation and is important for seed longevity by reducing metabolism to a minimum, which is the quiescent nature of mature seeds. Increasing endogenous ABA levels in seeds prepares them to survive lower water content, is important to seed maturation, and prevents precocious germination (vivipary). Seeds with low levels of ABA during seed development may prematurely germinate. Low ABA levels may result from a genetic mutation or environmental causes. Vivipary in some fruits is not uncommon and may occur during storage of fruit in the grocery store.

Ethylene is well known as the gaseous, ripening hormone. It also regulates seedling growth and the formation of root hairs, and can lead to epinasty — the bending of branches downwards.

Many plants are sensitive to the effect ethylene has on fruit ripening. The iconic examples are tomato and banana. These fruits are climacteric — they continue to ripen after harvest. The perception of ethylene by the cells that make up the fruit triggers the ripening process and the production of more ethylene. As the concentration of ethylene increases, so does the speed of the ripening. Picking immature or green fruit enables shipment over long distances, because the fruit is firmer and less likely to be damaged in transit. The green fruit can then be treated with ethylene from an ethylene generator (right) to accelerate ripening.

The process of senescence is also triggered by ethylene production and is important in the cut flower industry. Keeping cut flowers away from gases with ethylene-like activity helps keep floral arrangements looking fresh. Reducing ethylene action prolongs the vase life of many cut flowers as well as the storage of fruits.

The five major groups of plant hormones control many aspects of plant growth and development and have important applications in plant propagation. However, many other molecules are also key to the plant’s response to its environment. These highly diverse signal molecules modulate the plant’s physiology through complex interactions. A cell’s response to the many different hormones is a sum of its genetic makeup, its physiology, and the environment.