By the end of this lesson you will be able to:

The previous lesson focused on DNA’s ribose-phosphate backbone, on the purine and pyrimidine bases, and on how DNA complexes with protein and coils to form chromatin. Here we’ll look more closely at the synthesis (S) phase of interphase and at the mitosis (M) phase. Recall that the mitosis phase of the cell cycle “pie” is divided into four stages; we’ll look now at what happens in each of those stages and how it contributes to the outcome of mitosis, the equal division of chromosomes into two daughter cells.

refers to the number of sets of (identical) chromosomes in a cell.

Most of the cells of flowering plants that we have studied so far, like the cells making up the epidermis, cortex, and vascular tissues (but not the sperm and eggs cells), are called , and are diploid (2n). Each cell carries two sets of chromosomes: one from the male parent and one from the female parent.

The illustration above shows this for a hypothetical plant’s somatic cell’s nucleus containing 6 chromosomes. On the left side, the chromosomes are rearranged into three pairs of homologs. The matching chromosomes from the two different sets (for instance, the two copies of chromosome 1) are called homologous chromosomes or homologs. Homologs carry, at the same location on the chromosome, the genetic information that affects the same characteristic or function. The version of the information can be different between the homologous chromosomes — that is, the sequence of base pairs may be somewhat different because one homolog came from the female and the other from the male.

The homologs look identical and carry genetic information about particular cell functions at identical places on the chromosome (shown using dark bands at specific locations on the chromosome), but the exact base pair sequences at those locations may differ, resulting in different alleles and gene function. The parental combinations are shown at the right, and are the haploid contribution that resulted from meiosis. The 50% reduction in the sex cells ensures that offspring have the proper diploid chromosome number and matching homologs that are the full compliment of the plants genome.

A cell in the plant’s apical meristem that is preparing to divide is a somatic cell, so it is diploid, and contains two sets of chromosomes. When it undergoes mitosis, the outcome will be two identical diploid sister cells. Each of these sister cells will also be diploid, and will contain exact copies of the two sets of chromosomes that were in the original cell. “Daughter” and “sister” cells refer to the same thing — the new cells that arise as the result of mitosis.

If a cell that undergoes mitosis divides into two cells, how can both of these new cells be identical to each other and to the original cell? Won’t the chromosomes in the original parent cell be divided in half during division? Won’t the resulting cells be haploid instead of diploid? No. The number of chromosomes isn’t reduced during mitotic cell division because, prior to division, each of the chromosomes replicates (duplicates), meaning that the cell makes an exact copy of each chromosome. This replication process happens during the synthesis (S) phase of the cell cycle.

Remember that G1, S, and G2 phases of the cell cycle are collectively called interphase. Most cells in the plant go about their business in the G1 phase. Only those cells called upon to divide make the next step, which is to replicate their chromosomes in the S phase. Once the chromosomes are replicated, the cell moves into the G2 phase of interphase and awaits mitosis. The S phase is called synthesis because making a copy of the chromosome requires new DNA production, or synthesis.

The two chromosomes that are exact copies are called sister chromatids and remain connected at one spot along their length; this spot is called the centromere, as shown in the illustration.

This video provides a view of the fluidity of mitosis in a cell where 2N = 8 chromosomes, 4 pairs = 4 paternal + 4 maternal.

Below is an illustration and a corresponding micrograph for each stage in mitosis, showing a hypothetical plant cell where 2n=4 (two sets of chromosomes, two chromosomes per set). 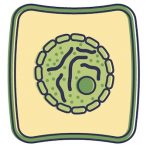 The lefthand frame of the illustration shows interphase cells. The deep red stained structures in the center of the onion cell micrograph are the chromosomes. They are corralled together within the nuclear membrane. Recall that during interphase the chromosomes are relaxed rather than highly condensed (that is, not extensively coiled or folded), and during the S phase of interphase each chromosome replicates. It makes sense that the chromosomes are relaxed because they can’t go through the replication process if they are tightly coiled, and because chromosomes only need to be coiled so that they can withstand movement and not break. They aren’t moving, just replicating, so being in a relaxed state is perfect. The two identical copies are called sister chromatids and they are held together at a site called the centromere. Note that sister chromatids are not the same as homologs. Homologs are corresponding chromosomes, one contributed through the sperm, the other through the egg. Sister chromatids are chromosomes that have replicated, are identical to each other, and are held together at centromeres. You can’t distinguish individual chromosomes in the picture because they are relaxed rather than tightly coiled and folded, making them so fine that they are difficult to see. 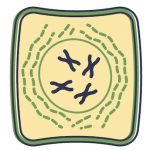 is the first stage of the M phase. In prophase the chromatin begins to coil and condense to form chromosomes. They are coiling because they are preparing to move around. You can begin to notice that each chromosome appears to have two strands (sister chromatids) and that these sister chromatids are attached to each other at a centromere. In prophase the nuclear membrane disappears and the chromosomes spread out to fill up much of the cell. During this phase, the begins to appear. The spindles are microtubules associated with movement of the chromosomes during division. 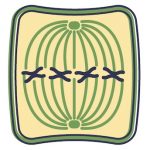 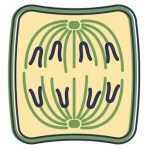 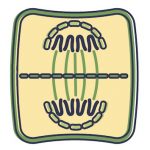 In , the nuclear membrane forms around the chromosomes in each of the daughter cells, a cell plate forms between these cells, and cell walls separate the newly formed cells in a process called . The chromosomes decondense and again become relaxed chromatin. Telophase is the last stage of the M phase. After telophase and cytokinesis, the cells return to G1 of interphase.

There are many sites online that illustrate mitosis, but particularly relevant here are ones that show micrographs of plant cells. You may discover that there are some details about the spindles and their apparent site of origin that differ between descriptions of mitosis in animal and plant cells; not everything  online pertains to plants. Any mention of a structure called a “centriole” refers to animal cell mitosis, not plants (as plants don’t have centrioles).

John H. Wahlert and Mary Jean Holland, of Baruch College, authored this site showing stages of mitosis in onion. (You can ignore the stages of whitefish mitosis in the second half of the site unless you are interested in the differences between plant and animal mitosis.)

Number of sets of homologous chromosomes in a cell.

Matching chromosomes from the two different sets; they carry the genetic information that affects the same characteristic or function at the same location on the chromosome; from the sperm and egg cells.

Term used for gamete cells that typically contain one set of each of the chromosomes; abbreviated n.

Term used for zygote cells, where the cell has two sets of chromosomes; abbreviated 2n.

Two haploid nuclei contained within one cell membrane in the mature female gametophyte. One sperm cell will unite with these two polar nuclei to establish the triploid endosperm tissue.

Term used for endosperm that has three sets of chromosomes; abbreviated 3n.

Cells of flowering plants, other than the reproductive cells; always 2n.

First stage of mitosis; chromatin begins to coil and condense to form chromosomes.

Microtubules associated with movement of the chromosomes during division.

Point of attachment of the spindle and the centromere.

Equatorial plate which is formed along the midline of the cell between the poles.

Third phase of mitosis; the sister chromatids separate (now chromosomes) and the centromeres divide, pulling the chromosomes to opposite poles.

Fourth and final stage of mitosis; the nuclear membrane forms around the chromosomes in each of the daughter cells.

Occurs directly after telophase; the cell plate forms between the two daughter cells and the cell walls separate the newly formed cells.

Second stage of interphase where the chromosomes replicate (DNA replicated).