This section draws heavily on recent research by Herminia Ibarra, Brian Uzzi, and others, to help you understand the different forms that social networks can take. Ibarra and Uzzi have been studying the social networks and social networking tactics and strategies of managers for more than 20 years and are considered thought-leaders in the field (Ibarra & Hunter, 2007; Ibarra, 2006). Their most recent work suggests that strong, useful networks don’t just happen at the watercooler. They have to be carefully constructed.

What separates successful managers from the rest of the pack? Networking: creating a fabric of personal contacts to provide the support, feedback, and resources needed to get things done. Yet many managers avoid networking. Some think they don’t have time for it. Others disdain it as manipulative. To succeed as a manager, Ibarra recommends building three types of networks:

These networks, their purpose, and how to build network membership, are summarized in “Personal, Operational, and Strategic Networks.” Most importantly, Ibarra’s work suggests that leaders need to possess all three types of networks, and not just one or two. Let’s take a look at each one of these networks.


“Personal networks are largely external, made up of discretionary links to people outside the workplace with whom we have something in common. As a result, what makes a personal network powerful is its referral potential. According to the famous six degrees of separation principle, our personal contacts are valuable to the extent that they help us reach, in as few connections as possible, the far-off person who has the information we need (Ibarra & Hunter, 2007).” 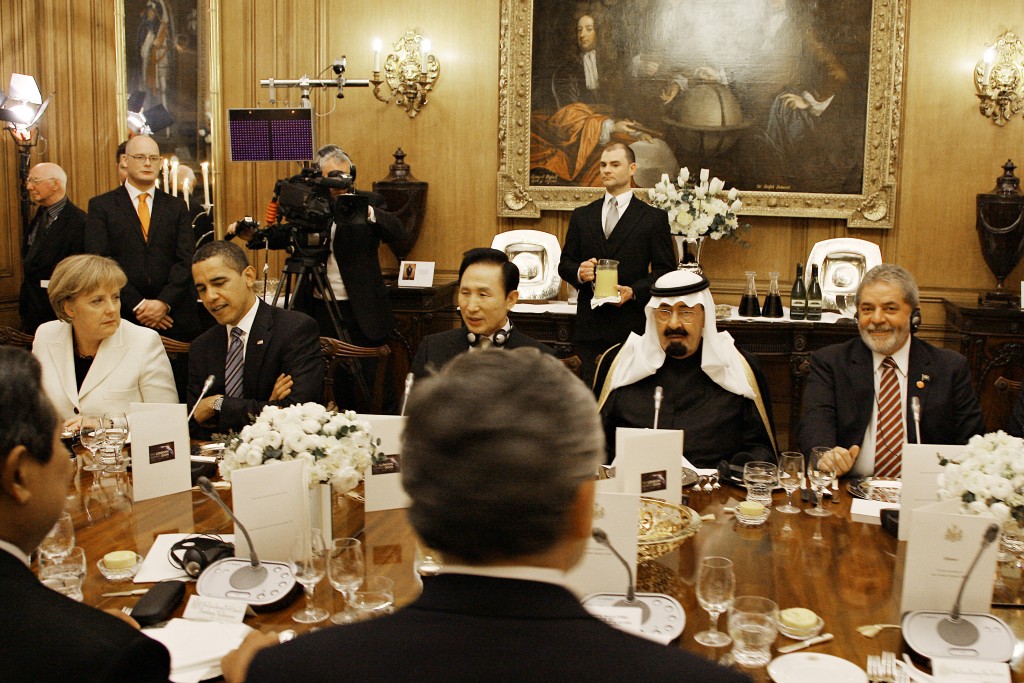 Agência Brasil – A working dinner at the summit – CC BY 3.0.

Personal networking engages kindred spirits from outside an organization in an individual’s efforts to learn and find opportunities for personal advancement. Personal networks are one’s circle of casual acquaintances, typically composed of people outside of the company you work for. Before you have a job in a particular company, many of your network ties are personal, oriented toward current interests and future potential interests. Key contacts are typically discretionary—that is, it is not always clear who is most relevant.

Most personal networks are highly clustered—that is, your friends are likely to be friends with one another as well. And, if you made those friends by introducing yourself to them (as opposed to being introduced by a mutual acquaintance), the chances are high that their experiences and perspectives echo your own. Ideas generated within a personal network typically circulate among the same people with shared views. This creates the risk that a potential winning idea can go unexploited if no one in the group has what it takes to bring that idea to fruition.

But what if someone within that cluster knows someone else who belongs to a whole different group? That connection, formed by an information broker, can expose your idea to a new world, filled with fresh opportunities for success. Diversity and breadth, that is, reaching out to contacts who can make referrals, makes the difference. Through professional associations, alumni groups, clubs, and personal interest communities, managers gain new perspectives that allow them to advance in their careers. This is what we mean by personal networking.

While personal networks are important, particularly to the extent that they provide you with valuable resources and access to needed resources, the challenge is to convert them into network resources that also help with operational and strategic needs. Too often, however, those individuals in the personal network just aren’t the right types of ties to be beneficial operationally or strategically, which is why you need to look at broadening your network to address operating and strategic needs.


“All managers need to build good working relationships with the people who can help them do their jobs. The number and breadth of people involved can be impressive—such operational networks include not only direct reports and superiors but also peers within an operational unit, other internal players with the power to block or support a project, and key outsiders such as suppliers, distributors, and customers. The purpose of this type of networking is to ensure coordination and cooperation among people who have to know and trust one another in order to accomplish their immediate tasks…Either you’re necessary to the job and helping to get it done, or you’re not (Ibarra & Hunter, 2007).”

On the basis of a close study of 30 emerging leaders, Ibarra and Hunter found that operational networking was geared toward doing one’s assigned tasks more effectively. It involves cultivating stronger relationships with colleagues whose membership in the network is clear; their roles define them as stakeholders. The previous quote provides you with a good working definition of operational network: “Either you’re necessary to the job and helping get it done, or you’re not.” That is, anyone who satisfies this criterion should be considered part of your operational network.

So, now you have two networking bases covered. At least you know how to identify the gaps in your personal and operational network. Your personal network provides access to external resources and referrals; your operational network helps you get the work done. Thus, most operational networking occurs within an organization, and ties are determined in large part by routine, short-term demands. Relationships formed with outsiders, such as board members, customers, and regulators, are directly task-related and tend to be bounded and constrained by demands determined at a higher level. But as a manager moves into a leadership role, his or her network must reorient itself externally and toward the future. This is the role played by strategic networking.


“Making a successful leadership transition requires a shift from the confines of a clearly defined operational network…It is a challenge to make the leap from a lifetime of functional contributions and hands-on control to the ambiguous process of building and working through networks. Leaders must accept that networking is one of the most important requirements of their new leadership roles and continue to allocate enough time and effort to see it pay off (Ibarra & Hunter, 2007).”

Whereas an operational network is fairly narrowly focused, with the locus of contacts formed around specific objectives, a strategic network necessarily involves lateral and vertical ties to stakeholders inside and outside of the firm. As Ibarra and Hunter found in their research, strategic networking is the ability to marshal information, support, and resources from one sector of a network to achieve results in another. Pushed to its logical limit, the basis of this difference is that effective leaders are highly dependent on others to get things done. The irony here is that the individuals in your network, who are the lifeline for building up the big picture, are also individuals who are likely to be outside of your immediate control. While this may seem obvious, it is often difficult to transition from a purely operational network to a strategic one, either due to simple time constraints (strategic networking takes time, often without immediate or obvious benefits) or because of negative personal attitudes toward strategic networking (for instance, “that’s too political and goes against my values”).

Networks create value, but networking takes real work. Beyond that obvious point, accept that networking is one of the most important requirements of a leadership role. To overcome any qualms about it, identify a person you respect who networks effectively and ethically. Observe how he or she uses networks to accomplish goals. You probably will also have to reallocate your time. This means becoming a master at the art of delegation, to liberate time you can then spend on cultivating networks.

Building a network obviously means that you need to establish connections. Create reasons for interacting with people outside your function or organization; for instance, by taking advantage of social interests to set the stage for addressing strategic concerns. Ibarra and Hunter found that personal networking will not help a manager through the leadership transition unless he or she learns how to bring those connections to bear on organizational strategy. In “Guy Kawasaki’s Guide to Networking through LinkedIn,” you are introduced to a number of network growth strategies using that powerful Web-based tool.

Finally, remind yourself that networking requires you to apply the principle of reciprocity. That is, give and take continually—though a useful mantra in networking is “give, give, give.” Don’t wait until you really need something badly to ask for a favor from a network member. Instead, take every opportunity to give to—and receive from—people in your networks, regardless of whether you need help.

LinkedIn (http://www.Linkedin.com) is the top business social networking site. With more than 30 million members by the end of 2008, its membership dwarfs that of the second-largest business networking site, Plaxo. LinkedIn is an online network of experienced professionals from around the world representing 150 industries (LinkedIn, 2008). Yet, it’s still a tool that is underutilized, so entrepreneur Guy Kawasaki compiled a list of ways to increase the value of LinkedIn (Guy Kawaski, 2008). Some of Kawasaki’s key points are summarized here that can help you develop the strategic side of your social network (though it will help you with job searches as well):

Increase your visibility. By adding connections, you increase the likelihood that people will see your profile first when they’re searching for someone to hire or do business with. In addition to appearing at the top of search results, people would much rather work with people who their friends know and trust.

Improve your connectability. Most new users put only their current company in their profile. By doing so, they severely limit their ability to connect with people. You should fill out your profile like it’s a resume, so include past companies, education, affiliations, and activities. You can also include a link to your profile as part of an e-mail signature. The added benefit is that the link enables people to see all your credentials.

Perform blind, “reverse,” and company reference checks. Use LinkedIn’s reference check tool to input a company name and the years the person worked at the company to search for references. Your search will find the people who worked at the company during the same time period. Since references provided by a candidate will generally be glowing, this is a good way to get more balanced data.

Make your interview go more smoothly. You can use LinkedIn to find the people that you’re meeting. Knowing that you went to the same school, play hockey, or share acquaintances is a lot better than an awkward silence after, “I’m doing fine, thank you.”

Gauge the health of a company. Perform an advanced search for company name and uncheck the “Current Companies Only” box. This will enable you to scrutinize the rate of turnover and whether key people are abandoning ship. Former employees usually give more candid opinions about a company’s prospects than someone who’s still on board.

In this section, you were introduced to a different slant on social networks—a slant that helps you manage your networks based on where you might be in an organization. Personal networks are important and tend to follow you everywhere. In this section, we stressed the access-to-information and referral benefits of personal networks. Operational networks are those that help you get your immediate work done, and if the key stakeholders in the work process aren’t already in your operational network, then you have some network rework in order. Finally, strategic networks are those that involved a much broader stakeholder group and typically involved individuals who are out of your direct control. One key takeaway from this section is that effective leaders are effective networkers, and you will need to figure out the style of networking that works for you as you move higher in an organization.