A is a plant that has been produced from human selection or breeding. A is a cultivar of a native plant. Most native grass cultivars are nativars that have been selected from the wild and not bred in cultivation for many generations.

Because they are propagated vegetatively, nativars are clones of each other. This ensures they have consistent size, shape, and color, but means they lack genetic variability. Plants grown from seed, however, have great , as each seed is distinct and will produce a plant with different characteristics. This means that, appearance will vary between plants. While this is not optimal for a garden design, it is good for restorations. Plants grown from native seed will be better adapted to exist in native plant communities. For this reason, nativars are not equivalent ecological substitutes for plants grown from native seed and are not recommended for restorations (White 2016).

However, native grass nativars provide many of the same benefits that grasses grown from seed provide. They both add organic matter to the soil, require few inputs, and require little maintenance. Benefits provided to wildlife are situational and nativar-specific, and have not been thoroughly studied yet. A study that looked at how well wildflower nativars attracted pollinators compared to the same species grown from seed found that plants grown from native seed outperformed their nativar counterparts more often, but sometimes no differences were found (White 2016). For one species, the nativar attracted more pollinators than the plant grown from seed. This demonstrates the need to evaluate nativars on an individual basis for the benefits they provide. In general, the farther removed a nativar is from the original plant, the less likely it will be to provide the same benefits (White 2016). 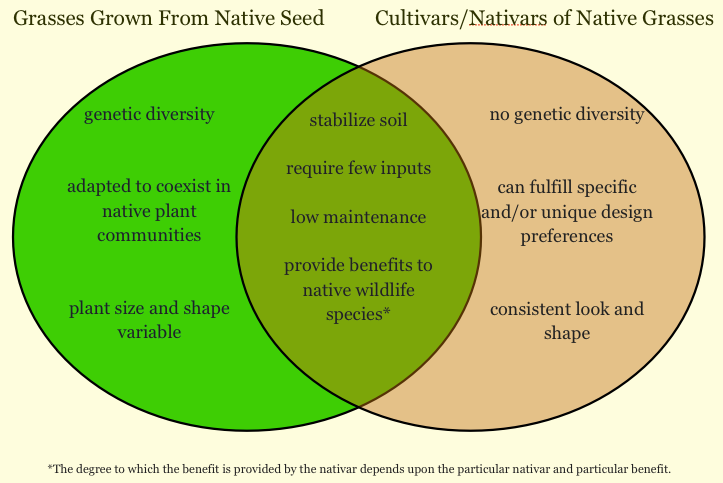 a plant that has been produced from human selection or breeding

A cultivar of a native plant.

The presence of variation in the genetic make-up of individuals.