What is a Grass?

Technically, the word grass refers to species in the (a.k.a. Graminae) plant family. In this book, we have also included grass-like plants, sedges from the Cyperaceae family, and rushes from the Juncaceae family.

Grasses, sedges, and rushes are in a botanical group referred to as , often called monocots for short. The name monocotyledon is derived from the single (mono) embryonic leaf (cotyledon) contained in the seed of a monocot. Graminoids and other monocots share this characteristic, along with narrow leaves, parallel venation, and fibrous root systems. Use the image on the below to learn the basic anatomy of a graminoid plant. 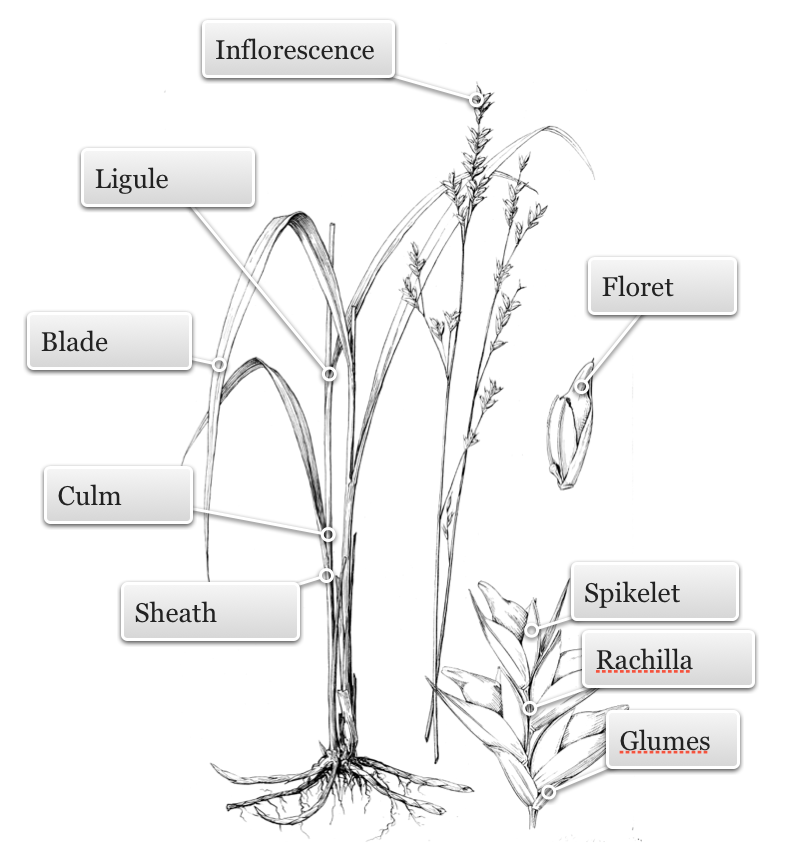 Inflorescence – The entire reproductive structure of a grass, sedge, or rush is called the inflorescence.

Ligule – The ligule is where the blade and the sheath meet. The ligule may be hairy, smooth, or have some other identifying characteristic of the species.

Blade – Term used to describe the leaf above the sheath.

Culm – This term refers to the stem of a grass or sedge.

Sheath – The sheath is the bottom of the leaf. It surrounds the culm like a tube. It splits open at the top to turn into the blade.

Floret – The name for a grass flower. This drawing shows a mature floret.

Spikelet – A unit made up of one or more florets, rachilla, and glumes.

Rachilla – The structure on which the florets are borne.

Glumes – Bracts that subtend the floret.

Neither grasses, sedges, nor rushes have colorful, large, or showy flowers. All are wind pollinated and so do not need bright petals or nectar to attract animal pollinators. For this reason, the flowers are simplified and usually small in size.

In grasses, the petals and sepals have been reduced to very small called that enclose the , which contains one . From the  rise two ending in feathery ; adjacent are typically three that open to shed pollen held on long, thin .

The ovary and anthers are usually protected and enclosed by two small papery called the and the . Outside the lemma and palea are two more larger, yet still small, papery bracts called . When the anthers have ripe pollen, the very small lodicules help to open and close the papery bracts, thus assisting with wind pollination. All of these small parts make up the , an individual grass flower. A large or grass usually contains hundreds of florets.

The arrangement of the one or many florets and the branching patterns of these florets determines how grasses are identified, named, and classified. If there is only one floret subtended by the two glumes, the floret is called a one-flowered . If there are two or more florets above the glumes, it’s a multi-flowered spikelet. Different of grasses have specific numbers of florets in a spikelet. The arrangement of spikelets in an inflorescence is also characteristic of specific genera. To see these small flower parts, you need a hand lens or, ideally, a microscope. This is often where many people give up on learning grass identification! However, you can easily learn the differences in the large seedheads that will help you identify many grasses.

Sedge inflorescences are simpler. However, they are just as small, and, again, the identification may require a hand lens or microscope. Sedges can be comprised of or flowers. Sedge female flowers are each enclosed by a small sack-like structure called a . The shape of the perigynium is often used in sedge identification. Many sedges have female flowers in one section (often lower on the flowering stem), with the male flowers that contain only the pollen in another section, (often on top of the stem). If you look closely at sedge flowers in early spring when they are shedding pollen, you can see the larger, more conspicuous female flowers growing below the male flowers. The flower (male or female) and bract is called a spikelet. Spikelets are attached directly to the axis that forms the inflorescence. Explore the image below to see the inflorescence of a sedge. 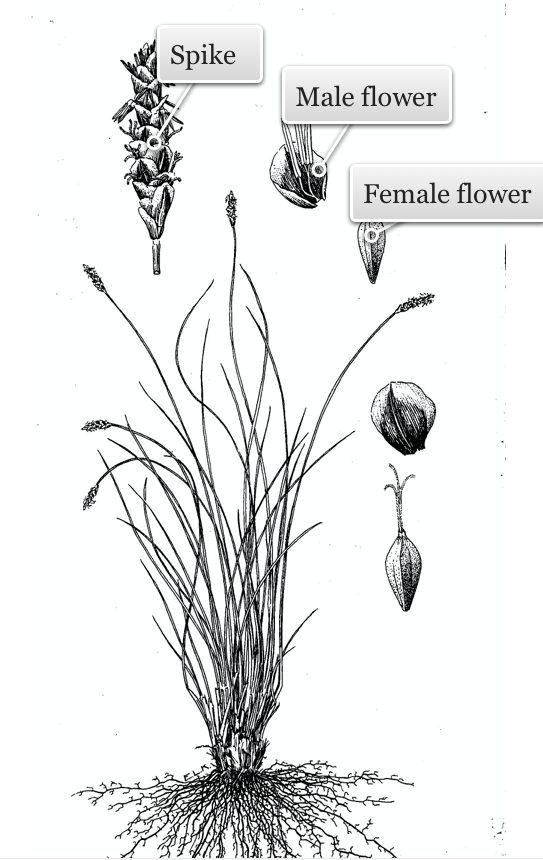 Female Flower – The female flower is enclosed by a sack called a perigynium. Three feathery stigmas emerge from the top of the perigynium.

Male Flower – This male flower has the characteristic leaf-life scale which encompasses the three anthers emerging from the base.

Rushes have the simplest inflorescence. The flowers are typically bisexual. From beneath each flower emerge six small green or brown, petal-like structures called .  Typically, there are many rush flowers held together in a cluster at the end of a stem.

To quickly tell the difference between grasses, sedges, and rushes, look at the stem and leaves. Grass stems  are normally round like a straw, and their leaves come off in two ranks, meaning one on either side of the plant—whereas the stems of sedges are usually triangular, and their leaves are three-ranked. It can be hard to feel the three edges when you roll the stem between your fingers.

Rushes have round stems as well, but unlike grasses the leaves of rushes grow from the base of the plant, so the stems lack the nodes that arise from leaf joints and are completely smooth.

This famous poem can help you remember the differences between the three:

Grasses have bumps all the way to the ground.

Illustration credit for this section in order:

Botanical name for the grass family.

One of the two great divisions of the Angiosperms (flowering plants) in which the seed characteristically has one leaf (cotyledon) that has parallel nervation.

In vascular plants, an outgrowth of cells that is plate-like in shape.

Small scales beneath the ovary of a grass flower.

The enlarged lower portion of the female organ, containing the ovule or ovules.

An immature, unfertilized seed, located within the ovary.

A short stalk projecting from the top of the ovary, usually terminating in a feathery stigma that receives pollen.

The pollen-receiving structure. The stigma may be located directly at the top of the ovary, or may be separated from the ovary by a short stalk called the style.

The pollen-producing part of the stamen, located at the tip of a slender stalk (the filament).

The threadlike stalk that bears the anther at its tip

A general term for any structure that represents a modified leaf; most commonly used to refer to reduced, leaflike structures associated with inflorescences.

The upper, inner bract in the grass floret.

The lower, outer bract in the grass floret.

A bract located at the base of a grass spikelet. Typically there are two glumes associated with each spikelet.

In grasses, the collective term for an individual flower plus the enclosing palea and lemma.

The non-technical term referring to the reproductive structure or inflorescence of a graminoid.

The flowering portion(s) of a plant, complete with any associated bracts.

In Poaceae, a small spike, consisting of one or more florets attached to a small central axis (rachilla), together with the basal bracts (glumes). In Cyperaceae, the male or female flower plus the subtending bract.

Plural of the word genus.

A unisexual flower possesses either the male or female reproductive parts, but not both.

A bisexual flower has both male and female reproductive parts.

A small sack-like structure that encloses the flowers of sedge plant.

A segment of a perianth not clearly differentiated into typical corolla and calyx.

In Poaceae and Cyperaceae, the stem of the plant.