Grasses have evolved over centuries to take advantage of the environment around them. Depending on the climate where they originated, they have developed one of two different ways to produce sugars through .

These ways are referred to as and photosynthesis. C3 plants have evolved in temperate climates and are called cool season plants because their photosynthetic pathway is most efficient in cooler temperatures. Hot temperatures slow the growth of C3 grasses and may induce dormancy until temperatures cool again. C3 grasses flower in late spring or early summer before temperatures get too high.

C4, or warm season grasses, use an altered photosynthetic process that uses less water and takes advantage of warmer temperatures. Their optimum temperature range for growth and development is higher than C3 grasses. Warm season grasses flower at the end of the summer and reach their peak growth in September.

and season grasses will have very different growth rates and life cycles in a garden and prairie setting. Using these differences for design and function in the garden should be part of your overall use of grasses to maximize their benefit.  The exact seasonal growth patterns of cool and warm season grasses differ slightly depending on the species and the climate. The above graph shows the general growth patterns of each type and how they overlap.

Grasses have two general growth habits, clumping and running. Clumpers grow in tufts or bunches and are often referred to as bunch grasses. Grasses with a running growth habit spread rapidly by sending out horizontal stems called if aboveground or called if below ground.

The type of growth habit is important to consider when deciding where and which grass to plant. Running grasses can be great for stabilizing banks and acting as good ground cover, but can also take over areas with less competitive plants. Most clumping grasses do not spread rapidly and instead grow slowly outward, making them easier to manage.

In addition to their growth habit, grasses grow in various shapes that are referred to in the design world as forms. Common grass forms are irregular, upright open, upright narrow, upright arching, mound, and open and spreading.

IRREGULAR
are of varying length, often branched, and exhibit no regular pattern of growth, like the ‘Oehme’ palm sedge above. 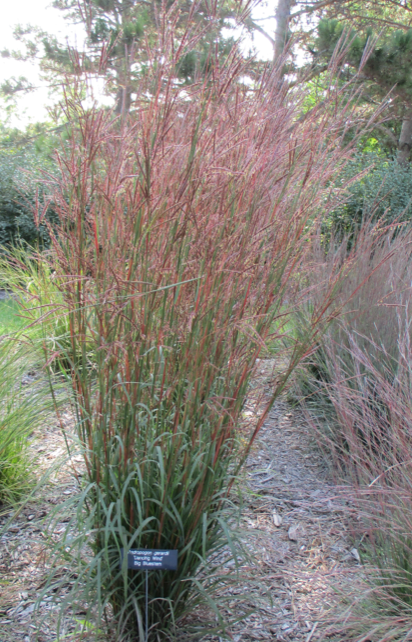 UPRIGHT OPEN
are multi-stemmed or branched, varying in height and spreading upward and outward, like the big bluestem above.

are rarely, if ever, branched and usually perpendicular to the ground; mature height of each culm many times greater than width, like the Indiangrass above. 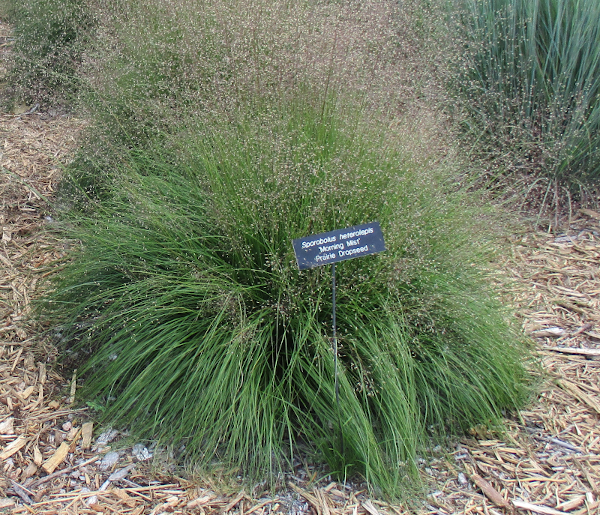 are usually short and hidden by long leaves that curve outward and downward, forming a dense plant that is more or less round in outline like the prairie dropseed plant above.

upright and spreading, with the inflorescence arching and/or nodding. Prairie cordgrass, pictured above, typically exhibits an upright arching form. 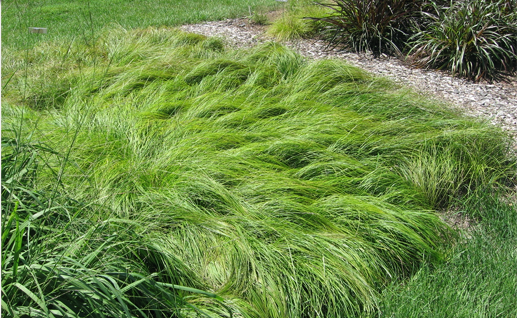 and/or leaves spread more or less horizontally outward from the center of the plant and are rarely erect. Above, Pennsylvania sedge is exhibiting an open and spreading form.

Most native grasses used for landscapes are long-lived perennials, going dormant in the winter and growing again the following spring. However, some grass species are annuals, completing their entire life cycle, and then dying in one year.

Other grasses are perennials in warmer climates, such as in 6 or 7, but are grown as annuals in zones 3 and 4. Details on the perennial life-cycles of individual species can be found in Chapter 3.

Refers to plants that use the C3 photosynthetic pathway.

Refers to plants that have a C4 photosynthetic pathway.

is a process used by plants and other organisms to convert light energy into chemical energy that can later be released to fuel the organisms' activities.

Refers to the C3 photosynthetic pathway used by plants. This process converts carbon dioxide and ribulose bisphosphate (RuBP, a 5-carbon sugar) into 3-phosphoglycerate through the following reaction:
CO2 + H2O + RuBP → (2) 3-phosphoglycerate
This reaction occurs in all plants as the first step of the Calvin–Benson cycle.

A pathway of carbon fixation that reduces rates of photorespiration, where the first product formed as a result of carboxylation by CO2 of an acceptor molecule, phospho-enolpyruvate (PEP), if the four carbon oxalo-acetate (OAA). Eventually the CO2 is handed on to and refixed by, the Calvin cycle.

Refers to plants that use the C3 photosynthetic pathway.

Refers to plants that have a C4 photosynthetic pathway.

In Poaceae and Cyperaceae, the stem of the plant.

Refers to the zones in the USDA Plant Hardiness Zone Map used to determine which plants are likely to thrive in a certain location. The map is based upon average annual extreme minimum temperatures, divided into 10-degree F zones.