Government agencies generate huge amounts of information and much of it gets issued in the form of publications that are usually public. We will discuss specific types of public records and methods of locating those in Lesson 13. Here we are talking about the types of publications issued by public-sector institutions.

Let’s say that you are working as a PR specialist for the National Football League’s Players Association (the union for football players) You need to find information to answer the question your information strategy has posed about the long-term health effects of head injuries on professional football players in order to understand one of the issues facing members of the union. One of the types of information that can be useful is likely to be accessible in publications produced by relevant government agencies.

For example, The Centers for Disease Control and Prevention has produced a publication about how to avoid concussions in football and how to recognize their symptoms, especially in young athletes. They have also produced a publication for coaches. Those resources could prove useful for your work as a PR specialist for the professional players association. You also might need to examine publications produced by state government agencies (e.g. the State Department of Education may have publications regarding athletic injury prevention for schools in the state). Local government publications might detail the Parks and Rec summer leagues and the types of injury prevention activities they are supporting. Because there appears to be a strong connection between repeated head injuries in youth sports and long-term damage among professional athletes, all of these types of public-sector publications could inform your work.

The federal government of the United States has no close competitor as a generator of information. Its information production takes place not only in the nation’s capital, but also in federal offices in all 50 states and at diplomatic posts and military installations around the globe.

Some of the publications from the federal government are collections of of statistical information that the government routinely collects. We’ll discuss some of these kinds of statistics produced by government agencies in Lesson 14.

Keeping a record of government activity

Whenever Congress holds hearings, passes legislation or conducts its business, publications are generated. The executive branch agencies, including the Office of the President and all cabinet offices, are obligated by law to document their activities. Judicial actions by courts must be recorded. The infrastructure for locating such information is extensive. A meta-search engine created by the U.S. Government Printing Office called MetaLib is a great starting point for locating government records from a huge number of federal government sources. Legislative committees also have research staff that generate information and produce reports on behalf of the committee. The Congressional Research Service (CRS) was created by Congress in order to have its own source of nonpartisan, objective analysis and research on all legislative issues. Their reports are available to those who request them or to those who conduct a search on the websites that collect reports such as the Federation of American Scientists.

Organizations or agencies that receive a federal grant to conduct research must prepare regular reports that outline the progress of their work. These reports 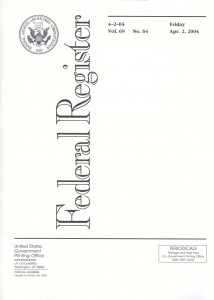 are collected by the Federal Research in Progress database. Many agencies that conduct research also post their research activity reports on the agency website. For example the National Institutes of Health makes all NIH grant information available online.

Publishing general information for citizens
The federal government is willing, and in some cases eager, to provide some information to all who seek it. They produce prodigious numbers of publications and websites for general readers. This is especially the case with consumer information through the Federal Citizen Information Center at the Publications.USA.gov website.
Serving as an information clearinghouse

Some information is deemed so important to collect and archive that the federal government fills that purpose. The Education Resources Information Center, the National Technical Information Service and the National Library of Medicine are three such clearinghouses. Each produces its own databases and the information you find there is publicly available to anyone who asks.

State and local government agencies produce similar types of publications – everything from media kits & news releases to minutes of meetings to newsletters and magazines that focus on state or local issues. Monitoring the offices with which you have regular contact for these types of routine communications is essential for you to keep up with your media assignments.

A comprehensive guide to federal, state and local government publications is at www.usa.gov

International agencies and commissions meet regularly to deliberate on subjects such as agricultural production, the world’s money supply, labor issues, nutrition, disarmament, and trade. Each agency produces information about its decisions and the reasons for its actions.
These agencies also publish periodicals, generate and interpret statistics, and issue news releases about their areas of interest. This material is usually available on the agencies’ websites or through their public information offices. Many of these international agency documents are also available in the federal depository libraries that house U.S. government documents.

Information Strategies for Communicators by Kathleen A. Hansen and Nora Paul is licensed under a Creative Commons Attribution 4.0 International License, except where otherwise noted.