One of the most important parts of HRM is to know and apply the law in all activities the HR department handles. Specifically with hiring processes, the law is very clear on a fair hiring that is inclusive to all individuals applying for a job. The laws discussed here are applied specifically to the recruiting of new employees.

The IRCA relates not only to workers you hire but also to subcontractors. In a subcontractor situation (e.g., your organization hires an outside firm to clean the building after hours), your organization can still be held liable if it is determined your organization exercises control over how and when the subcontractors perform their jobs. In 2005, undocumented janitorial workers sued Walmart, arguing that the contracting company they worked for didn’t pay them a minimum wage2. Because the retailer controlled many of the details of their work, Walmart was considered to be a coemployer, and as a result, Walmart was held responsible not only for back wages but for the fact their subcontractor had hired undocumented workers.

HR professionals must verify both the identity and employment eligibility of all employees, even if they are temporary employees. The INS I-9 form (Employment Eligibility Verification form) is the reporting form that determines the identity and legal work status of a worker.

If an audit is performed on your company, you would be required to show I-9 forms for all your workers. If an employer hires temporary workers, it is important to manage data on when work visas are to expire, to ensure compliance. Organizations that hire illegal workers can be penalized $100 to $1,000 per hire. There is a software solution for management of this process, such as HR Data Manager. Once all data about workers are inputted, the manager is sent reminders if work authorization visas are about to expire. Employers are required to have the employee fill out the I-9 form on their first day of work, and the second section must be filled out within three days after the first day of employment. The documentation must be kept on file three years after the date of hire or for one year after termination. Some states, though, require the I-9 form be kept on file for as long as the person is employed with the organization.

In 2010, new rules about the electronic storage of forms were developed. The US Department of Homeland Security said that employees can have these forms electronically signed and stored. 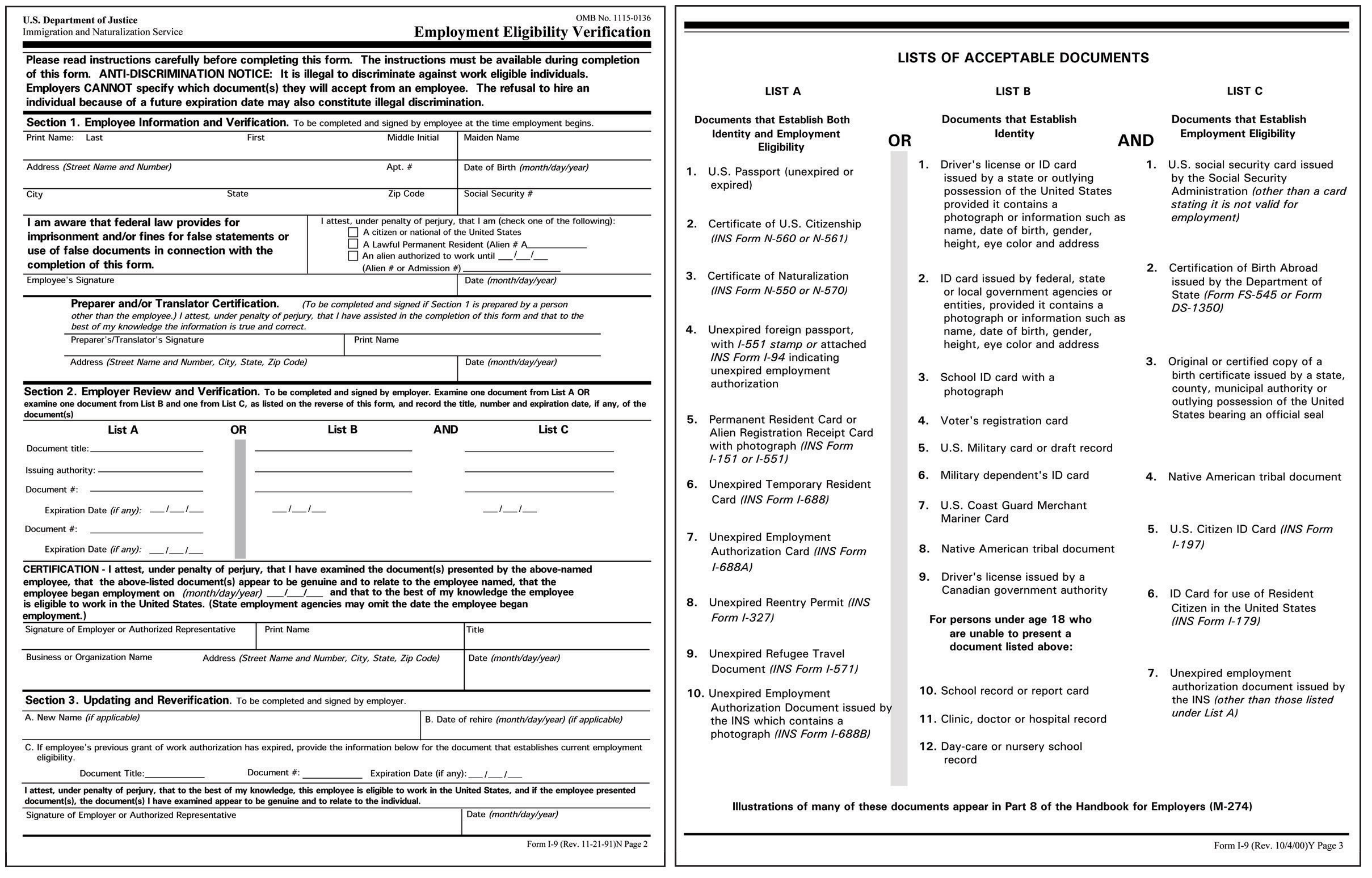 The I-9 form must be completed by management within three days of hire and be kept for at least three years, but in some states, it must be kept on file for the duration of employment.

In response to the September 11, 2001, terrorist attacks against the United States, the Patriot Act was signed, introducing legislative changes to enhance the federal government’s ability to conduct domestic and international investigations and surveillance activities. As a result, employers needed to implement new procedures to maintain employee privacy rights while also creating a system that allowed for release of information requested by the government.

The act also amended the Electronic Communications Privacy Act, allowing the federal government easier access to electronic communications. For example, only a search warrant is required for the government to access voice mail and e-mail messages.

The act also amended the Foreign Intelligence Surveillance Act. The government is allowed to view communications if an employee is suspected of terrorism, and the government does not have to reveal this surveillance to the employer.

It is prudent for HR professionals and managers to let potential employees know of these new requirements, before the hiring process begins.

Aimee, a highly motivated salesperson, has come to you with a complaint. She states that she had her performance evaluation, but all the items on her evaluation didn’t relate to her actual job. In the past two years, she explains, her job has changed because of the increase of new business development using technology. How would you handle this?

We discuss Equal Employment Opportunity (EEO) laws in Chapter 3. They are worth mentioning again here in relation to the recruitment process. The Equal Employment Opportunity Commission (EEOC) is a federal agency charged with the task of enforcing federal employment discrimination laws. While there are restrictions on the type of company covered (companies with at least fifteen employees), the EEOC requires collection of data and investigates discrimination claims, again, for organizations with more than fifteen employees.

Under EEO law related to the recruitment process, employers cannot discriminate based on age (forty years or older), disability, genetic information, national origin, sex, pregnancy, race, and religion. In a job announcement, organizations usually have an EEO statement. Here are some examples:

In addition to including the EEO policy in the job announcement, HR is required to post notices of EEOC policies in a visible part of the work environment (such as the break room).

Although the EEOC laws in hiring are clear about discrimination, an exception may occur, called the bona fide occupational qualification (BFOQ). BFOQ is a quality or attribute that is reasonably necessary to the normal operation of the business and that can be used when considering applicants. To obtain a BFOQ exception, a company must prove that a particular person could not perform the job duties because of sex, age, religion, disability, and national origin. Examples of BFOQ exceptions might include the following:

However, many arguments for BFOQ would not be considered valid. For example, race has never been a BFOQ, nor has customers’ having a preference for a particular gender. Generally speaking, when going through the recruitment process and writing job descriptions, assuming a BFOQ would apply might be a mistake. Seeking legal council before writing a job description would be prudent.

Other aspects to consider in the development of the job description are disparate impact and disparate treatment. These are the two ways to classify employment discrimination cases. Disparate impact occurs when an organization discriminates through the use of a process, affecting a protected group as a whole, rather than consciously intending to discriminate. Some examples of disparate impact might include the following:

Disparate treatment, when one person is intentionally treated differently than another, does not necessarily impact the larger protected group as a whole, as in disparate impact. The challenge in these cases is to determine if someone was treated differently because of their race or gender or if there was another reason for the different treatment. Here are two examples:

Can you think of other examples of disparate impact that might affect a certain protected group of people under EEOC?

The Concept of Disparate Impact

An attorney from Berkent Legal Services explains the concept of disparate impact.