The Process of Collective Bargaining

In any bargaining agreement, certain management rights are not negotiable, including the right to manage and operate the business, hire, promote, or discharge employees. However, in the negotiated agreement there may be a process outlined by the union for how these processes should work. Management rights also include the ability of the organization to direct the work of the employees and to establish operational policies. As an HR professional sits at the bargaining table, it is important to be strategic in the process and tie the strategic plan with the concessions the organization is willing to make and the concessions the organization will not make.

Another important point in the collective bargaining process is the aspect of union security. Obviously, it is in the union’s best interest to collect dues from members and recruit as many new members as possible. In the contract, a checkoff provision may be negotiated. This provision occurs when the employer, on behalf of the union, automatically deducts dues from union members’ paychecks. This ensures that a steady stream of dues is paid to the union.

To recruit new members, the union may require something called a union shop. A union shop requires a person to join the union within a certain time period of joining the organization. In right-to-work states a union shop may be illegal. Twenty-two states have passed right-to-work laws, as you can see in Figure 12.6 “Map of Right-to-Work States”. These laws prohibit a requirement to join a union or pay dues and fees to a union. To get around these laws, agency shops were created. An agency shop is similar to a union shop in that workers do not have to join the union but still must pay union dues. Agency shop union fees are known as agency fees and may be illegal in right-to-work states. A closed shop used to be a mechanism for a steady flow of membership. In this arrangement, a person must be a union member to be hired. This, however, was made illegal under the Taft-Hartley Act. According to a study by CNBC, all twenty-two right-to-work states are in the top twenty-five states for having the best workforces1. However, according to the AFL-CIO, the average worker in a right-to-work state makes $5,333 less per year than other workers2. 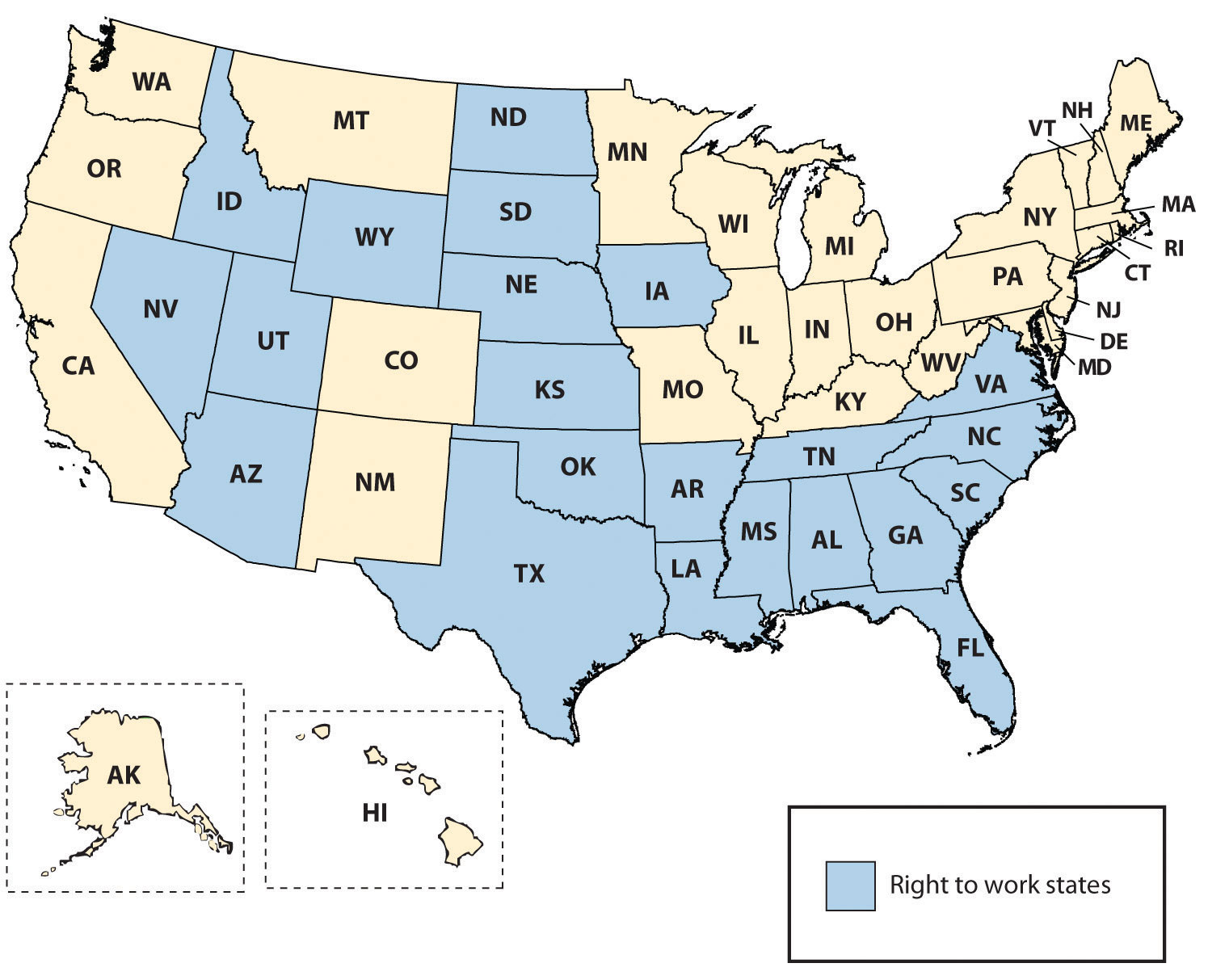 In a collective bargaining process, both parties are legally bound to bargain in good faith. This means they have a mutual obligation to participate actively in the deliberations and indicate a desire to find a basis for agreement. There are three main classification of bargaining topics: mandatory, permissive, and illegal. Wages, health and safety, management rights, work conditions, and benefits fall into the mandatory category. Permissive topics are those that are not required but may be brought up during the process. An example might include the requirement of drug testing for candidates or the required tools that must be provided to the employee to perform the job, such as a cellular phone or computer. It is important to note that while management is not required by labor laws to bargain on these issues, refusing to do so could affect employee morale. We can also classify bargaining issues as illegal topics, which obviously cannot be discussed. These types of illegal issues may be of a discriminatory nature or anything that would be considered illegal outside the agreement.

The collective bargaining process has five main steps; we will discuss each of these steps next. The first step is the preparation of both parties. The negotiation team should consist of individuals with knowledge of the organization and the skills to be an effective negotiator. An understanding of the working conditions and dissatisfaction with working conditions is an important part of this preparation step. Establishing objectives for the negotiation and reviewing the old contract are key components to this step. The management team should also prepare and anticipate union demands, to better prepare for compromises.

The second step of the process involves both parties agreeing on how the time lines will be set for the negotiations. In addition, setting ground rules for how the negotiation will occur is an important step, as it lays the foundation for the work to come.

In the third step, each party comes to the table with proposals. It will likely involve initial opening statements and options that exist to resolve any situations that exist. The key to a successful proposal is to come to the table with a “let’s make this work” attitude. An initial discussion is had and then each party generally goes back to determine which requests it can honor and which it can’t. At this point, another meeting is generally set up to continue further discussion.

Once the group comes to an agreement or settlement (which may take many months and proposals), a new contract is written and the union members vote on whether to accept the agreement. If the union doesn’t agree, then the process begins all over again.

Ramifications of a Bargaining Impasse

When the two parties are unable to reach consensus on the collective bargaining agreement, this is called a bargaining impasse. Various kinds of strikes are used to show the displeasure of workers regarding a bargaining impasse. An economic strike is a strike stemming from unhappiness about the economic conditions during contract negotiations. For example, 45,000 Verizon workers rallied in the summer of 2011 when contract negotiations failed (Goldberg, 2011). The two unions, Communications Workers of America and the International Brotherhood of Electric Workers, claim that the new contract is unfair, as it asks Verizon workers to contribute more to health plans, and the company is also looking to freeze pensions at the end of the year and reduce sick time (Goldberg, 2011). Verizon says the telecommunications business is changing, and it cannot afford these expenses. An unfair labor practices strike can happen during negotiations. The goal of an unfair labor practices strike is to get the organization to cease committing what the union believes to be an unfair labor practice. A bargaining impasse could mean the union goes on strike or a lockout occurs. The goal of a lockout, which prevents workers from working, is to put pressure on the union to accept the contract. A lockout can only be legally conducted when the existing collective bargaining agreement has expired and there is truly an impasse in contract negotiations. In summer 2011, the National Basketball Association locked out players when the collective bargaining agreement expired, jeopardizing the 2011–12 season (Kyler, 2011) while putting pressure on the players to accept the agreement. Similarly, the goal of a strike is to put pressure on the organization to accept the proposed contract. Some organizations will impose a lockout if workers engage in slowdowns, an intentional reduction in productivity. Some unions will engage in a slowdown instead of a strike, because the workers still earn pay, while in a strike they do not. A sick-out is when members of a union call in sick, which may be illegal since they are using allotted time, while a walk-out is an unannounced refusal to perform work. However, this type of tactic may be illegal if the conduct is irresponsible or indefensible, according to a judge. Jurisdictional strikes are used to put pressure on an employer to assign work to members of one union versus another (if there are two unions within the same organization) or to put pressure on management to recognize one union representation when it currently recognizes another. The goal of a sick-out strike is to show the organization how unproductive the company would be if the workers did go on strike. As mentioned under the Taft-Hartley Act, wildcat strikes are illegal, as they are not authorized by the union and usually violate a collective bargaining agreement. Sympathy strikes are work stoppages by other unions designed to show support for the union on strike. While they are not illegal, they may violate the terms of the collective bargaining agreement.

How would you feel about going on strike? What kinds of situations may cause you to do so?

First and foremost, when working witih labor unions, a clear understanding of the contract is imperative for all HR professionals and managers. The contract (also called the collective bargaining agreement) is the guiding document for all decisions relating to employees. All HR professionals and managers should have intimate knowledge of the document and be aware of the components of the contract that can affect dealings with employees. The agreement outlines all requirements of managers and usually outlines how discipline, promotion, and transfers will work.

Because as managers and HR professionals we will be working with members of the union on a daily basis, a positive relationship can not only assist the day-to-day operations but also create an easier bargaining process. Solicitation of input from the union before decisions are made can be one step to creating this positive relationship. Transparent communication is another way to achieve this goal.

In HR, one of the major aspects of working with labor unions is management of the union contract. We discuss the grievance process in Section 12.3 “Administration of the Collective Bargaining Agreement”.

The employees in your organization are unhappy with several aspects of their job, including pay. You have tried to solve this issue by creating new compensation plans, but with no avail. You hear talk of unionizing. When you bring this issue to your CEO, she vehemently opposes unions and tells you to let the employees know that if they choose to unionize, they will all lose their jobs. Knowing the CEO’s threat is illegal, and knowing you may lose your job if the workers decide to unionize, how would you handle this?