The adequacy requirement is essential to any voluntary manslaughter analysis. Many defendants are provoked and thereafter kill with murder intent. Nonetheless, most provocations are not adequate to drop the crime from murder to manslaughter. The victim’s provocation must be serious enough to goad a reasonable person into killing (People v. Steele, 2011). A reasonable person is a fictional and objective standard created by the trier of fact. Of course, the defendant must actually be provoked, which is a subjective standard (People v. Steele, 2011).

Revisit the situation discussed in Section 9 “Example of a Spontaneous Killing”, in which Dillon kills his supervisor Frank with a brass paperweight after Frank fires him. Clearly, Frank’s conduct provokes Dillon into killing Frank. However, getting fired would not provoke a reasonable person into a killing frenzy. In fact, reasonable people are fired all the time and learn to live with it peacefully. Therefore, in this example, Dillon’s crime is most likely murder, not voluntary manslaughter.

A traditional example of provocation that is adequate to reduce a crime from murder to manslaughter is an observation by one spouse of another spouse in the act of adultery (Ohio v. Shane, 2011). For example, José comes home from work early and catches his wife in bed with his best friend. He becomes so enraged that he storms over to the dresser, grabs his handgun, and shoots and kills her. Clearly, José acts with intent to kill. However, the victim provoked this intent with an act that could cause a reasonable person to kill. Thus José has probably committed voluntary manslaughter in this case, not murder.

Other Examples of Adequate Provocation

Other examples of adequate provocation are when the homicide victim batters the defendant and a killing that occurs during a mutual combat (Ohio v. Shane, 2011). Cases have generally held that words alone are not enough to constitute adequate provocation (Girouard v. State, 2011). Thus in the adequate provocation example in Section 9 “Example of Adequate Provocation”, if a friend told José that his wife was committing adultery, and José responded by shooting and killing his wife, this would probably be murder, not voluntary manslaughter.

Concurrence of the Killing and the Heat of Passion

The second requirement of voluntary manslaughter is that the killing occur during a heat of passion. Defendants generally exhibit rage, shock, or fright when experiencing a heat of passion. This emotional state negates the calm, deliberate, intent to kill that supports a charge of murder. However, heat of passion mental states are typically brief in duration. Thus there cannot be a significant time lapse between the victim’s provocation and the killing (State v. Cole, 2010). Analyze the adequate provocation example discussed in Section 9 “Example of Adequate Provocation”. If José waits until the next day to shoot and kill his wife, the crime is most likely premeditated first-degree murder, not voluntary manslaughter.

Roberta points an unloaded gun at Jennifer to scare her into breaking up with Roberta’s ex-boyfriend. This crime is called brandishing a weapon and is often classified as a misdemeanor. At the sight of the gun, Jennifer suffers a heart attack and dies. Roberta has most likely committed misdemeanor manslaughter in this case. Brandishing a weapon is not always inherently dangerous to life. However, if Jennifer has a heart attack and dies because of Roberta’s commission of this misdemeanor offense, Roberta still could be criminally responsible for misdemeanor manslaughter in many jurisdictions.

As stated in Section 9.5.1 “Depraved Heart Murder”, reckless or negligent involuntary manslaughter is often similar to second-degree depraved heart murder. If the prosecution charges the defendant with both crimes, the trier of fact determines which crime is appropriate based on the attendant circumstances.

Steven, an off-duty sheriff’s deputy, brings his shotgun into the local rifle shop to be repaired. Steven thinks that the shotgun is unloaded and hands it to the employee with the safety off. Unfortunately, the gun is loaded and discharges, shooting and killing the employee. In this case, Steven should know that at certain times the safety on his shotgun must always be on because he is a registered gun owner and a sheriff’s deputy who has been trained to handle guns. However, Steven is unaware of the risk and believes that the gun is unloaded. If the employee dies, Steven could be convicted of negligent involuntary manslaughter in jurisdictions that recognize this crime. If Steven is in a jurisdiction that only recognizes reckless involuntary manslaughter, the prosecution may have to prove a higher degree of awareness, such as Steven’s knowledge that the shotgun was loaded. 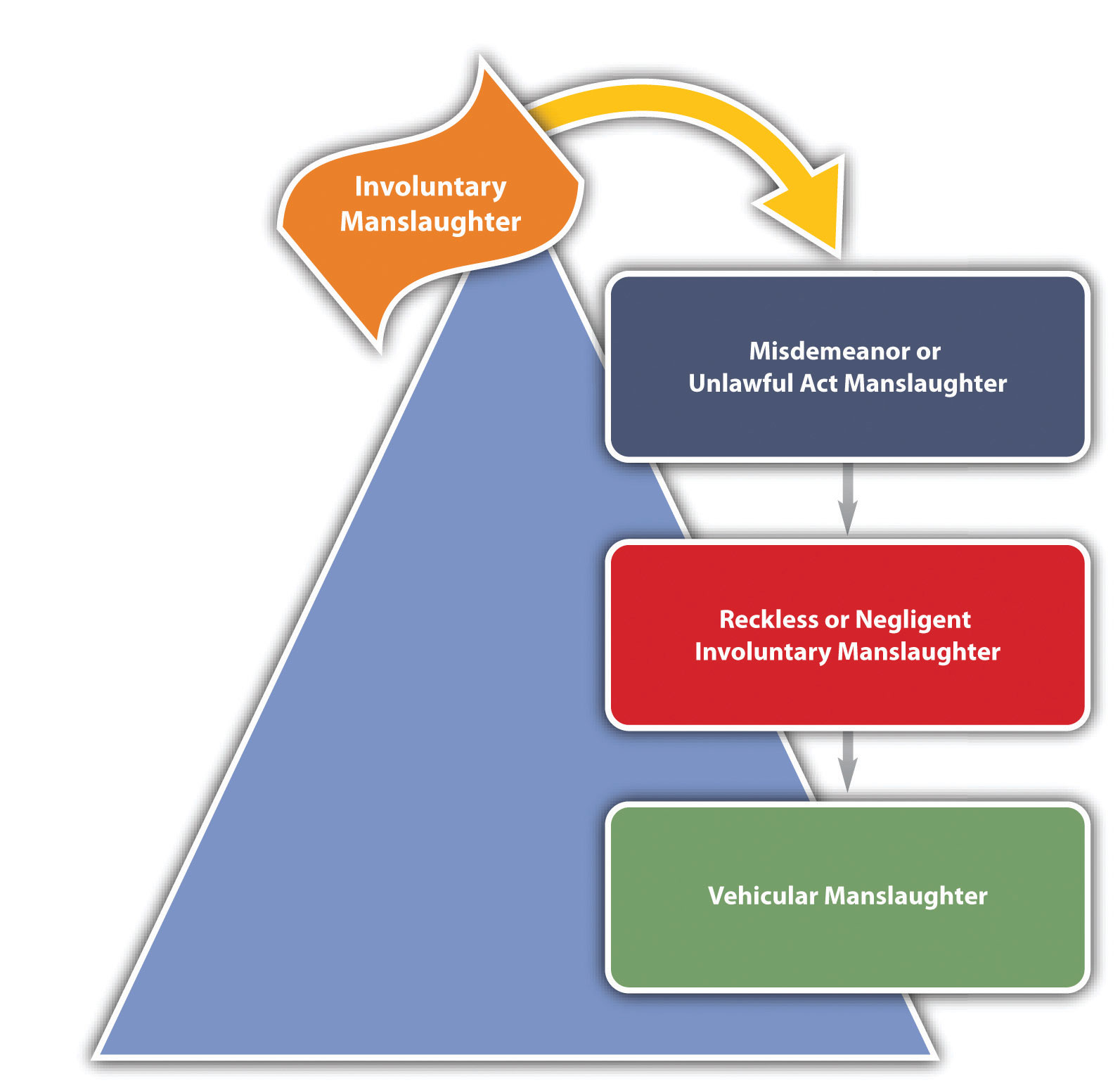 Should Killing an Abortion Doctor Be Voluntary Manslaughter?

Scott Roeder left his pew during a church service, walked up to a well-known abortion doctor, and deliberately shot him in the head, killing him. During Roeder’s trial for first-degree premeditated murder, the defense asked the court to allow a second charge of voluntary manslaughter. The defense claimed that defendant Roeder was acting in defense of others in the attempt to save the lives of unborn children (USA Today, 2010).

Scott Roeder’s murder verdict is shown in this video: