At early common law, corporations were not criminally prosecutable as separate entities, which was most likely because in England, corporations were owned and operated by the government. In modern times, American corporations are private enterprises whose actions can seriously injure other individuals and the economy. Thus a corporation can be criminally responsible for conduct apart from its owners, agents, or employees (New York Central R. Co. v. U.S., 2010). In general, this is a vicarious liability, transferring criminal responsibility for an offense from an agent or employee of the corporation to the corporation itself, based on the employment relationship. Of course, the agent or employee also is responsible for the crime he or she commits.

Harry, an employee of Burger King Corporation, shreds corporate documents in his office when Burger King is sued civilly for sexual harassment in a multimillion-dollar class action suit. Under modern theories of corporate liability, both Harry and Burger King could be criminally prosecuted for obstruction of justice. Note that Burger King’s liability is vicarious and depends on its relationship with Harry as an employer and the fact that Harry is acting within the scope of employment. Vicarious liability is distinguishable from accomplice liability, where the accomplice must be complicit with the criminal actor. The owners of Burger King, who are the corporate shareholders, did not actively participate in Harry’s conduct, although they will share in the punishment if the corporation is fined. 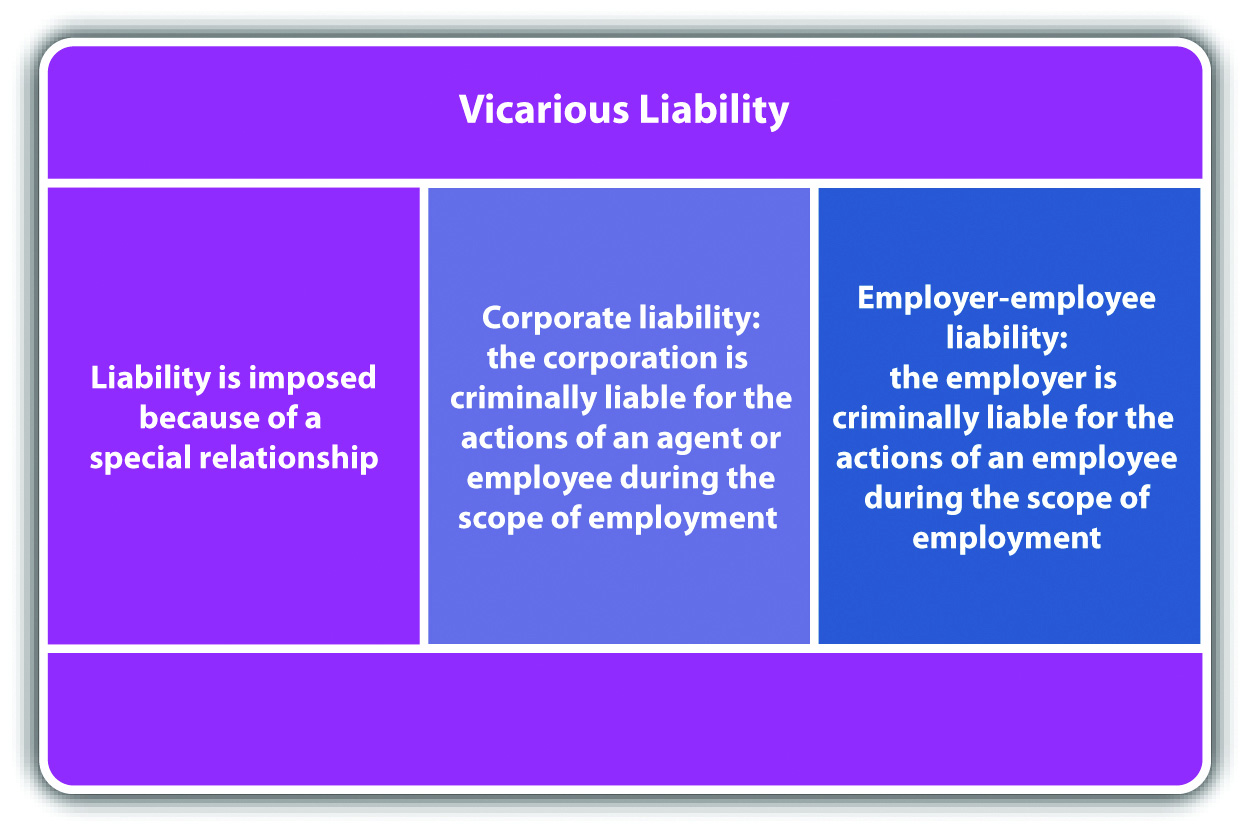 Generally speaking, criminal law disfavors criminal vicarious liability, the exception being corporate liability discussed in Section 7.2.1 “Corporate Liability”. Criminal vicarious liability violates the basic precept that individuals should be criminally accountable for their own conduct, not the conduct of others (State v. Akers, 2010). Although accomplice liability appears to hold an accomplice responsible for principals’ conduct, in reality the accomplice is committing a criminal act supported by criminal intent and is punished accordingly. In addition, other statutes that appear to impose criminal liability vicariously are actually holding individuals responsible for their own criminal conduct. Some examples are statutes holding parents criminally responsible when their children commit crimes that involve weapons belonging to the parents, and offenses criminalizing contributing to the delinquency of a minor. In both of these examples, the parents are held accountable for their conduct, such as allowing children to access their guns or be truant from school. The law is evolving in this area because the incidence of juveniles committing crimes is becoming increasingly prevalent.

Is a Corporation Criminally Accountable When Its Employees Are Not?

Read Commonwealth v. Life Care Centers of America, Inc., 456 Mass. 826 (2010). The case is available at this link: http://scholar.google.com/scholar_case?case=12168070317136071651&hl=en&as_sdt=2&as_vis=1&oi=scholarr. In Life Care Centers, a resident of the Life Care Center nursing home died in 2004 from injuries sustained when she fell down the front stairs while attempting to leave the facility in her wheelchair. The resident could try to leave the facility because she was not wearing a prescribed security bracelet that both set off an alarm and temporarily locked the front doors if a resident approached within a certain distance of those doors. The defendant, Life Care Centers of America, Inc., a corporation that operates the nursing home, was indicted for involuntary manslaughter and criminal neglect (Gillespie, G. G. & Scammon, K. S., 2011). The criminal intent element required for involuntary manslaughter and criminal neglect in Massachusetts is reckless intent. The evidence indicated that the order requiring the victim to wear a security bracelet was negligently edited out of the victim’s treatment sheet, based on the actions of more than one employee. The individual employee who left the victim near the stairs without the security bracelet relied on the orders that did not indicate a need for the bracelet. There was no evidence that any individual employee of Life Care Centers of America, Inc. was reckless. The prosecution introduced a theory of “collective knowledge” of the actions or failure to act of the corporation’s employees. The prosecution’s premise was that the several individual instances of negligent conduct combined to create reckless conduct that could be imputed to the corporation vicariously. The Massachusetts Supreme Court unanimously held that the corporation could not be held criminally responsible unless one individual employee could be held criminally responsible (Commonwealth v. Life Care Centers of America, Inc., 2011).