In some states and federally, an overt act in furtherance of the conspiracy is also required (18 U.S.C., 2011). The Model Penal Code requires an overt act only when the planned crime is “other than a felony of the first or second degree” (Model Penal Code § 5.03(5)). The overt act does not have to be criminal and may be planning or preparatory activity that would be insufficient to constitute the criminal act element required for attempt (State v. Verive, 2011).

The essence of conspiracy is agreement, which requires two or more parties. However, the modern approach is that a conspiracy may be formed as long as one of the parties has the appropriate intent (Ind. Code, 2011). Pursuant to this unilateral view of conspiracy, a conspiracy may exist between a defendant and a law enforcement decoy who is pretending to agree.

In the majority of jurisdictions, the criminal intent element required for conspiracy is specific intent or purposely to agree with another to commit the crime at issue (Connecticut Criminal Jury Instructions 3.3-1, 2011). As the Model Penal Code states, “[a] person is guilty of conspiracy…if with the purpose of promoting or facilitating its commission he: (a) agrees with such other person…that they…will engage in conduct which constitutes such crime” (Model Penal Code § 5.03(1) (a)). This intent has two components. The prosecution must prove that the conspirator intended to agree and also intended to commit the underlying offense (State v. Lewis, 2011).

Similar to accomplice liability, the acquittal of or failure to prosecute one party to the conspiracy does not relieve a coconspirator from criminal responsibility in many states (Tex. Penal Code, 2011). In addition, a coconspirator does not need to know every other coconspirator to be accountable as a member of the conspiracy (Neb. Rev. Stat. Ann., 2011). As long as the conspiracy defendant is aware that other coconspirators exist, the mens rea for conspiracy is present. As the Model Penal Code states, “[i]f a person guilty of conspiracy…knows that a person with whom he conspires to commit a crime has conspired with another person or persons to commit the same crime, he is guilty of conspiring with such other person or persons, whether or not he knows their identity” (Model Penal Code § 5.03(2)). Large-scale conspiracies, such as conspiracies to distribute contraband or illegal firearms, may result in each member sharing criminal responsibility for the conspiracy and every separate conspiracy transaction.

A conspiracy that has more than one criminal objective still can be just one conspiracy. Under the Model Penal Code, “[i]f a person conspires to commit a number of crimes, he is guilty of only one conspiracy so long as such multiple crimes are the object of the same agreement or continuous conspiratorial relationship” (Model Penal Code § 5.03(3)).

It is useful to understand two basic large-scale conspiracy organizational formats: wheel and chain conspiracies. A wheel conspiracy consists of a single conspirator, generally the ringleader who is interconnected to every other coconspirator. The ringleader is the hub; the other coconspirators are the spokes of the wheel. An example of a wheel conspiracy would be a mob boss linked to individual members of the mob following his or her commands. A chain conspiracy consists of coconspirators connected to each other like links in a chain but without a central interconnected ringleader. An example of a chain conspiracy is a conspiracy to manufacture and distribute a controlled substance, with the manufacturer linked to the transporter, who sells to a large-quantity dealer, who thereafter sells to a smaller-quantity dealer, who sells to a customer. Whether the conspiracy is wheel, chain, or otherwise, if the jurisdiction has a statute or common-law rule that each member does not need to personally know every other member as discussed previously, the coconspirators may be criminally responsible for the conspiracy and the crime(s) it furthers. 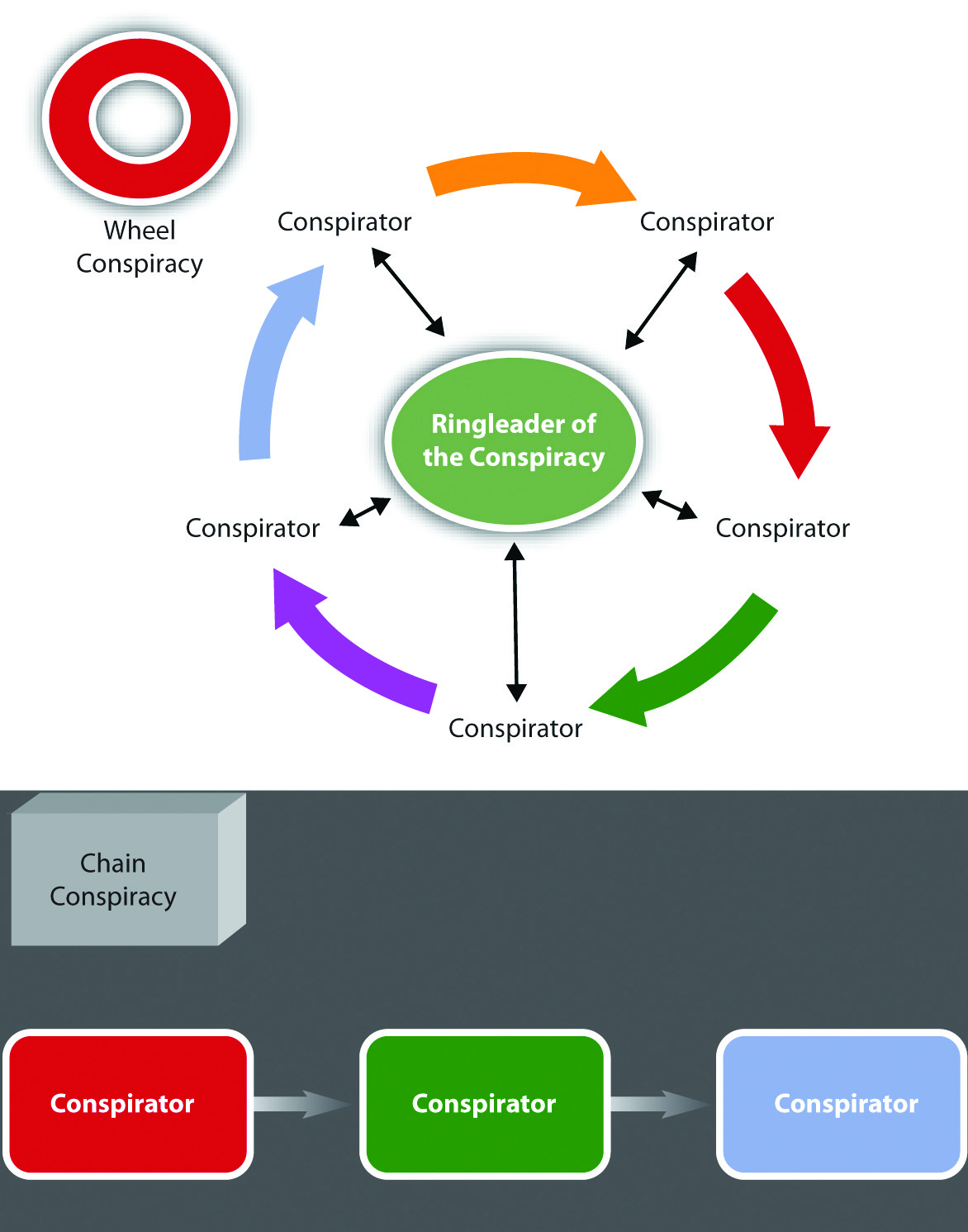 In some states and federally, individuals who enter into a conspiracy are criminally responsible for every reasonably foreseeable crime committed in furtherance of the conspiracy (U.S. v. Castaneda, 2011). This rule is called the Pinkerton rule, based on the US Supreme Court case that created it (Pinkerton v. U.S., 328 U.S. 640 (1946).). One factor used to determine foreseeability is the degree of the defendant’s involvement in the conspiracy. A defendant who plays a minor role is less likely to be criminally responsible than a defendant who has a more substantive involvement (U.S. v Castaneda, 2011).

Example of the Pinkerton Rule

Review the example in Section 8 “Example of Conspiracy Intent” with Shelley and Sam. Assume that on the night of the convenience store robbery, Lucy, an armed, off-duty police officer, wanders into the store to purchase cigarettes at the moment Sam pulls out his fake handgun. Lucy yanks her concealed handgun out of her waistband and tells Sam to drop the weapon. Jolene, another customer in the store, observes the two pointing guns at each other and suffers a fatal heart attack. In many jurisdictions, both Shelley and Sam probably could be criminally responsible for conspiracy to commit robbery, attempted robbery, and the murder of Jolene. Shelley and Sam attempted to commit the robbery in furtherance of the conspiracy. Both played a major role in the conspiracy and the attempted robbery. Thus both are accountable for the foreseeable consequences. Robbery is a crime of violence, so a death that occurs during a robbery is foreseeable, even though Sam is armed with only a pretend handgun. Thus Shelley and Sam may be charged with and convicted of Jolene’s murder, which is most likely felony murder. Felony murder is discussed in detail in Chapter 9 “Criminal Homicide”.

A criminal offense that requires two parties cannot be the object of a conspiracy that consists of two parties. This rule is called Wharton’s rule, or the concert of action rule (USLegal, 2011). However, a statute can expressly criminalize a conspiracy to commit any crime, abrogating the rule. Currently, Wharton’s rule can operate as a judicial presumption, to be applied in the absence of legislative intent to the contrary (Ianelli v. U.S., 2011).

Example of a Case Where Wharton’s Rule Is Inapplicable

Renunciation as a Defense to Conspiracy

Review the example with Shelley and Sam in Section 8 “Example of Conspiracy Intent”. In this example, Shelley and Sam agree to commit a robbery at the convenience store where Steffy is a cashier. Adjust the example so that Shelley has a change of heart and contacts law enforcement about the robbery before she drives Sam to the convenience store in the getaway car. Law enforcement officers ask Shelley to help them apprehend Sam, and she agrees. Shelley drives Sam to the convenience store as planned. Two law enforcement officers dress in plainclothes and pretend to be shopping in the convenience store when Sam arrives. As soon as Sam pulls out his fake handgun, they arrest him. If Shelley is in a jurisdiction that recognizes the renunciation defense, she probably will have a valid defense to a charge of conspiracy. Although Shelley committed the criminal act for conspiracy with the requisite criminal intent, she voluntarily and completely renounced the conspiracy and thwarted the crime that was its object. Thus Shelly has likely met the requirements of renunciation, and only Sam may be charged with a crime or crimes in this scenario.

At early common law, conspiracy, which was a misdemeanor, merged into the completed felony that was its object. The merger was based on the significant procedural differences between misdemeanor and felony trials. As the differences diminished, so did the merger concept. In modern times, conspiracy does not merge into the completed offense (Callanan v. U.S., 2011). Thus a defendant can be charged with and convicted of conspiracy and any crime the conspiracy furthers, as is discussed more fully in Section 8.2.4 “Consequences of Conspiracy”.

In response to an increase in organized crime, the federal government enacted the Racketeer Influenced and Corrupt Organization Act (RICO) (18 U.S.C. §§ 1961-1968)). RICO provides extensive criminal penalties and also a civil cause of action for organized crime and includes all offenses that are criminal under state or federal law. Although RICO was originally intended to focus on sophisticated criminal businesses such as loan sharking, mafia, and high-stakes gambling operations (Blakey, G. R., 2011), its modern application is much broader and encompasses many white-collar crimes and small-time conspiracies. A criminal organization always involves more than one member, and at the very least rudimentary planning, so conspiracy is a common RICO charge and is often easier to prove than a completed criminal offense. Recently, RICO has been criticized as being overused and applied in a manner inconsistent with its original purpose, especially when it targets smaller, low-member criminal “organizations.” Some examples of highly publicized RICO defendants are Hell’s Angels (Zimmerman, Keith and Zimmerman, Kent, 2011), Catholic priests in sex abuse cases (Smith, G., 2011), and Major League Baseball (Sportsbusinessdaily.com, 2011). 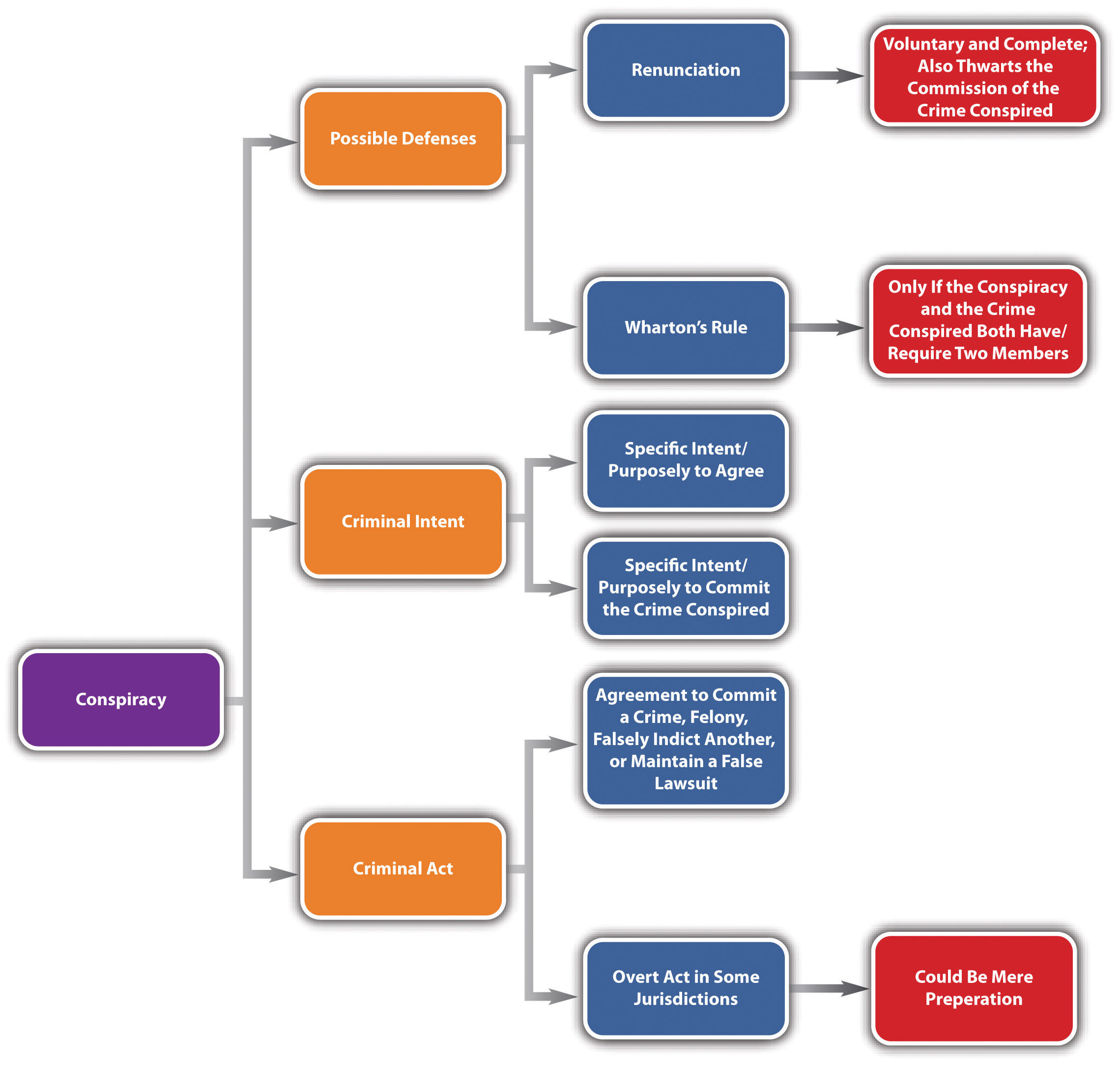 Tom DeLay, former US House Majority Leader, was convicted of conspiracy and money laundering (Meyer, P., 2011). His verdict is shown in this video:

Did the Coconspirators Intend to Commit Murder?

The defendant Jeen Han and her twin sister Sunny had a long history of violence against each other (People v. Han, 2011). Defendant Han became enraged when Sunny pressed charges against her for theft. Testimonial evidence presented at trial showed that she expressed the intent to kill her twin before any conspiracy was formed (People v. Han, 2011). She actively sought out individuals to help her with her sister’s murder (People v. Han, 2011). Thereafter, she met up with her teenaged cousin and a friend, the other two codefendants. The three broke into Sunny Han’s apartment, tied up Sunny and her roommate at gunpoint and placed them in the bathtub, and then ransacked Sunny’s purse. Receipts produced at trial indicated a purchase of garbage bags, twine, utility tape, and Pine Sol previous to the incident. The Court of Appeal of California held that although circumstantial, the evidence supported the verdict. The court reasoned that the purchase of the twine, garbage bags, utility tape, and Pine Sol, combined with the actions of the defendants in breaking into the apartment, tying up the two roommates at gunpoint, and putting them in the bathtub, could be interpreted as circumstantial evidence of intent to kill, and the trier of fact did not err in making that conclusion (People v. Han, 2011).