Law can be classified in a variety of ways. One of the most general classifications divides law into civil and criminal. A basic definition of civil law is “the body of law having to do with the private rights of individuals” (Yourdictionary.com, 2010). As this definition indicates, civil law is between individuals, not the government. Criminal law involves regulations enacted and enforced by government action, while civil law provides a remedy for individuals who need to enforce private rights against other individuals. Some examples of civil law are family law, wills and trusts, and contract law. If individuals need to resolve a civil dispute, this is called civil litigation, or a civil lawsuit. When the type of civil litigation involves an injury, the injury action is called a tort.

In civil litigation, an injured party sues to receive a court-ordered remedy, such as money, property, or some sort of performance. Anyone who is injured—an individual, corporation, or other business entity—can sue civilly. In a civil litigation matter, the injured party that is suing is called the plaintiff. A plaintiff must hire and pay for an attorney or represent himself or herself. Hiring an attorney is one of the many costs of litigation and should be carefully contemplated before jumping into a lawsuit.

The goal of civil litigation is to compensate the plaintiff for any injuries and to put the plaintiff back in the position that person held before the injury occurred. This goal produces interesting results. It occasionally creates liability or an obligation to pay when there is no fault on behalf of the defendant. The goal is to make the plaintiff whole, not to punish, so fault is not really an issue. If the defendant has the resources to pay, sometimes the law requires the defendant to pay so that society does not bear the cost of the plaintiff’s injury.

Chris begins the first day at his new job as a cashier at a local McDonald’s restaurant. Chris attempts to multitask and pour hot coffee while simultaneously handing out change. He loses his grip on the coffee pot and spills steaming-hot coffee on his customer Geoff’s hand. In this case, Geoff can sue McDonald’s and Chris if he sustains injuries. McDonald’s is not technically at fault, but it may be liable for Geoff’s injuries under a theory of respondeat superior.

Often the plaintiff sues the defendant for money rather than a different, performance-oriented remedy. In a civil litigation matter, any money the court awards to the plaintiff is called damages. Several kinds of damages may be appropriate. The plaintiff can sue for compensatory damages, which compensate for injuries, costs, which repay the lawsuit expenses, and in some cases, punitive damages. Punitive damages, also referred to as exemplary damages, are not designed to compensate the plaintiff but instead focus on punishing the defendant for causing the injury (BMW of North America, Inc., 1996).

Characteristics of a Criminal Prosecution

Parties in a Criminal Prosecution

Applicability of the Constitution in a Criminal Prosecution

The defendant in a criminal prosecution can be represented by a private attorney or a free attorney paid for by the state or federal government if he or she is unable to afford attorney’s fees and facing incarceration (Alabama v. Shelton, 2001). Attorneys provided by the government are called public defenders (18 U.S.C., 2010). This is a significant difference from a civil litigation matter, where both the plaintiff and the defendant must hire and pay for their own private attorneys. The court appoints a free attorney to represent the defendant in a criminal prosecution because the Constitution is in effect in any criminal proceeding. The Constitution provides for the assistance of counsel in the Sixth Amendment, so every criminal defendant facing incarceration has the right to legal representation, regardless of wealth.

The presence of the Constitution at every phase of a criminal prosecution changes the proceedings significantly from the civil lawsuit. The criminal defendant receives many constitutional protections, including the right to remain silent, the right to due process of law, the freedom from double jeopardy, and the right to a jury trial, among others.

Goal of a Criminal Prosecution

One consequence of the goal of punishment in a criminal prosecution is that fault is almost always an element in any criminal proceeding. This is unlike civil litigation, where the ability to pay is a priority consideration. Clearly, it is unfair to punish a defendant who did nothing wrong. This makes criminal law justice oriented and very satisfying for most students.

Injury and a victim are not necessary components of a criminal prosecution because punishment is the objective, and there is no plaintiff. Thus behavior can be criminal even if it is essentially harmless. Society does not condone or pardon conduct simply because it fails to produce a tangible loss.

Examples of Victimless and Harmless Crimes

Steven is angry because his friend Bob broke his skateboard. Steven gets his gun, which has a silencer on it, and puts it in the glove compartment of his car. He then begins driving to Bob’s house. While Steven is driving, he exceeds the speed limit on three different occasions. Steven arrives at Bob’s house and then he hides in the bushes by the mailbox and waits. After an hour, Bob opens the front door and walks to the mailbox. Bob gets his mail, turns around, and begins walking back to the house. Steven shoots at Bob three different times but misses, and the bullets end up landing in the dirt. Bob does not notice the shots because of the silencer. 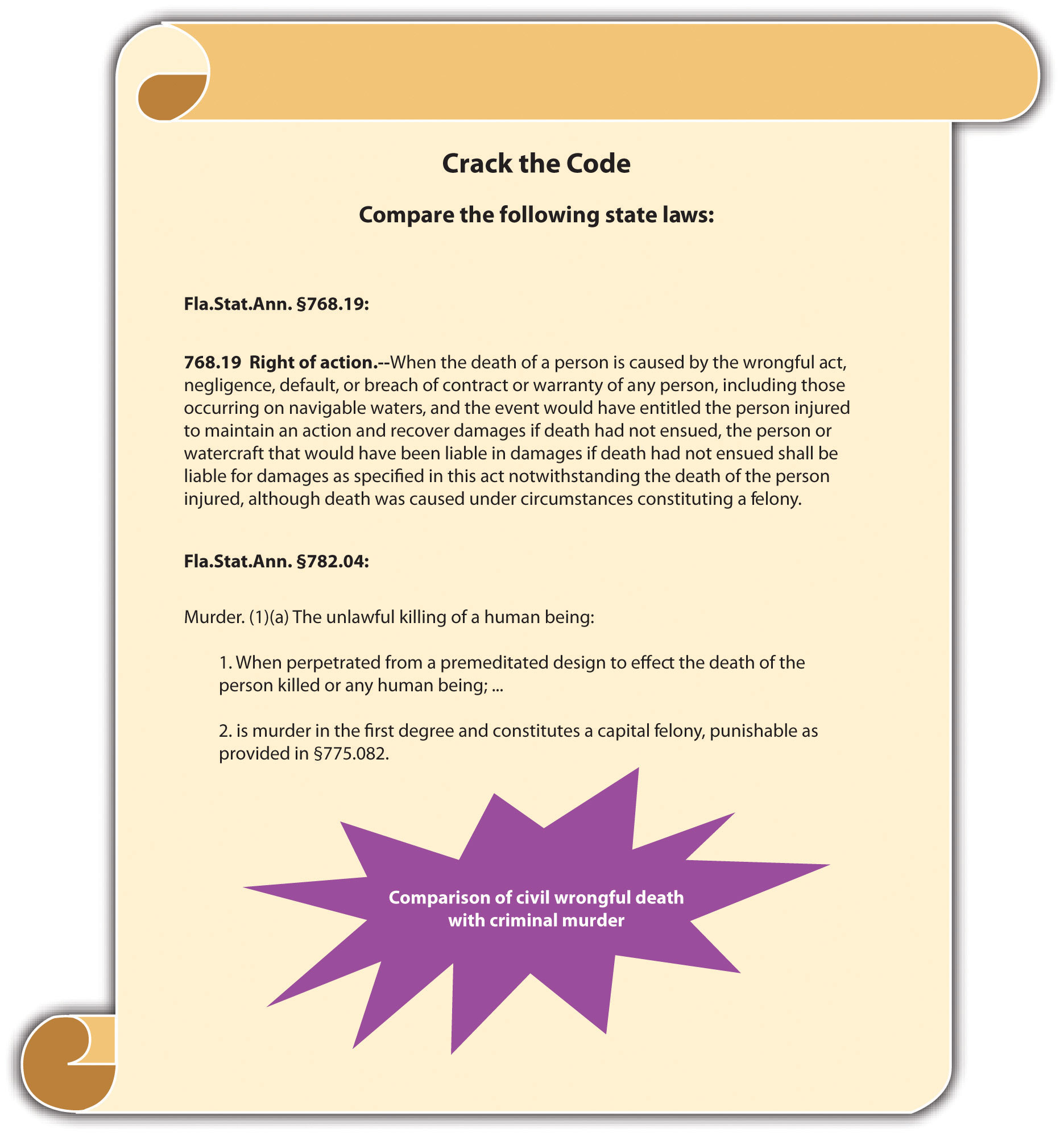 In the subsequent civil lawsuit, the burden of proof was preponderance of evidence, which is 51–49 percent, and O. J. Simpson was forced to testify. O. J. Simpson was found liable in the civil lawsuit. The jury awarded $8.5 million in compensatory damages to Fred Goldman (Ron Goldman’s father) and his ex-wife Sharon Rufo. A few days later, the jury awarded punitive damages of $25 million to be shared between Nicole Brown Simpson’s children and Fred Goldman (Jones, T. L., 2010).