As stated previously, causation and harm can also be elements of a criminal offense if the offense requires a bad result. In essence, if injury is required under the statute, or the case is in a jurisdiction that allows for common-law crimes, the defendant must cause the requisite harm. Many incidents occur when the defendant technically initiates circumstances that result in harm, but it would be unjust to hold the defendant criminally responsible. Thus causation should not be rigidly determined in every instance, and the trier of fact must perform an analysis that promotes fairness. In this section, causation in fact and legal causation are examined as well as situations where the defendant may be insulated from criminal responsibility. 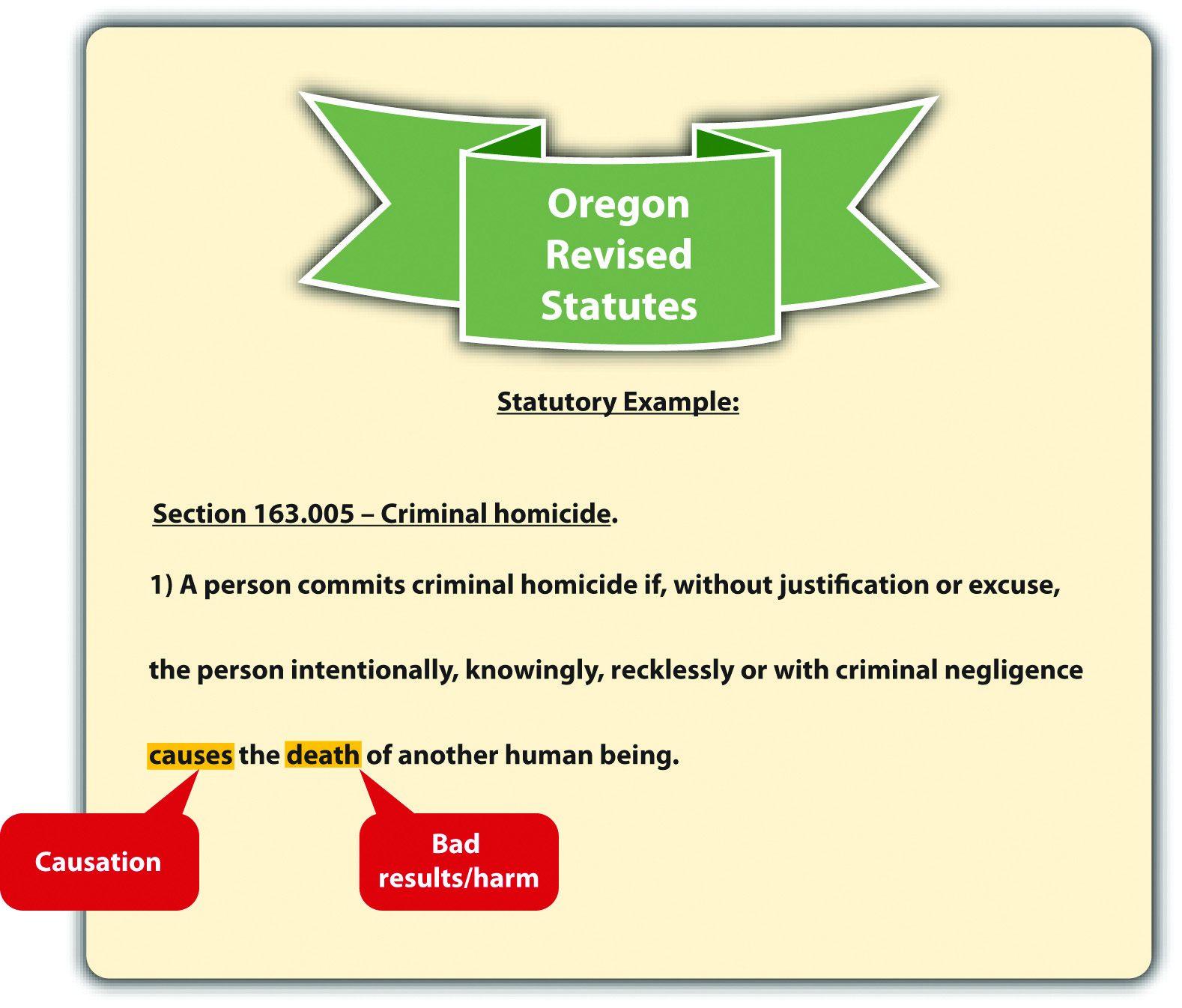 Example of Factual Cause

Henry and Mary get into an argument over their child custody agreement. Henry gives Mary a hard shove. Mary staggers backward, is struck by lightning, and dies instantly. In this example, Henry’s act forced Mary to move into the area where the lighting happened to strike. However, it would be unjust to punish Henry for Mary’s death in this case because Henry could not have imagined the eventual result. Thus although Henry is the factual or but for cause of Mary’s death, he is probably not the legal cause.

It is the second part of the analysis that ensures fairness in the application of the causation element. The defendant must also be the legal or proximate cause of the harm. Proximate means “near,” so the defendant’s conduct must be closely related to the harm it engenders. As the Model Penal Code states, the actual result cannot be “too remote or accidental in its occurrence to have a [just] bearing on the actor’s liability” (Model Penal Code § 2.03 (2) (b)).

The test for legal causation is objective foreseeability (California Criminal Jury Instructions No. 520, 2011). The trier of fact must be convinced that when the defendant acted, a reasonable person could have foreseen or predicted that the end result would occur. In the example given in Section 4 “Example of Factual Cause”, Henry is not the legal cause of Mary’s death because a reasonable person could have neither foreseen nor predicted that a shove would push Mary into a spot where lightning was about to strike.

Imagine that Henry and Mary get into the same argument over their child custody agreement, but this time they are in their garage, which is crowded with furniture. Henry gives Mary a hard shove, even though she is standing directly in front of a large entertainment center filled with books and a heavy thirty-two-inch television set. Mary staggers backward into the entertainment center and it crashes down on top of her, killing her. In this situation, Henry is the factual cause of Mary’s death because he started the chain of events that led to her death with his push. In addition, it is foreseeable that Mary might suffer a serious injury or death when shoved directly into a large and heavy piece of furniture. Thus in this example, Henry could be the factual and legal cause of Mary’s death. It is up to the trier of fact to make this determination based on an assessment of objective foreseeability and the attendant circumstances.

Example of an Intervening Superseding Cause

Review the example with Henry and Mary in Section 4 “Example of Legal Causation”. Change the example so that Henry pulls out a knife and chases Mary out of the garage. Mary escapes Henry and hides in an abandoned shed. Half an hour later, Wes, a homeless man living in the shed, returns from a day of panhandling. When he discovers Mary in the shed, he kills her and steals her money and jewelry. In this case, Henry is still the factual cause of Mary’s death, because he chased her into the shed where she was eventually killed. However, Wes is probably the intervening superseding cause of Mary’s death because he interrupted the chain of events started by Henry. Thus Wes is subject to prosecution for Mary’s death, and Henry may be prosecuted only for assault with a deadly weapon.

One and Three Years and a Day Rules

In criminal homicide cases, the causation analysis could be complicated by a victim’s survival for an extended time period. Because of modern technology, victims often stay alive on machines for many years after they have been harmed. However, it may be unreasonable to hold a defendant responsible for a death that occurs several years after the defendant’s criminal act. A few states have rules that solve this dilemma. 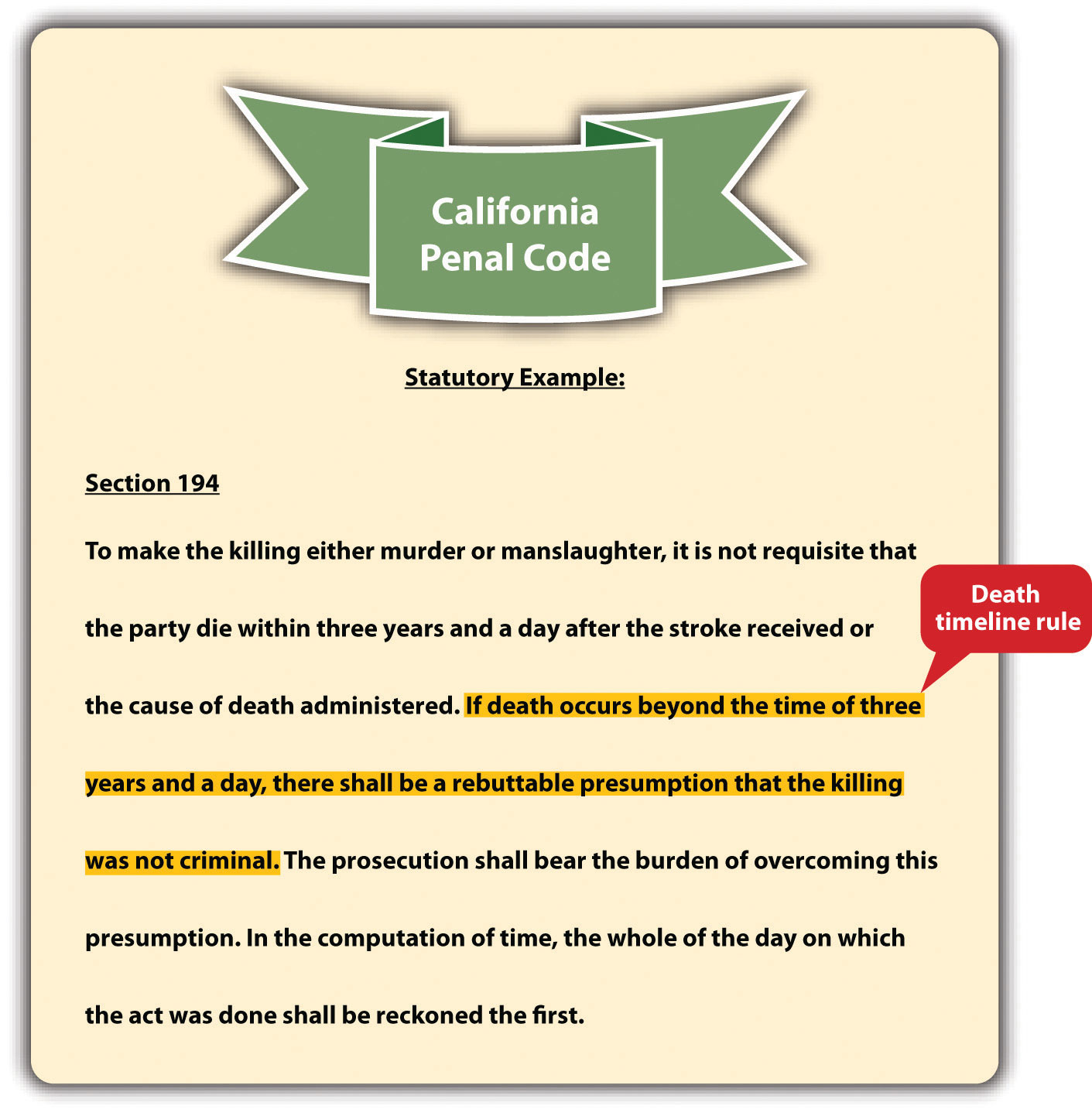 Death timeline rules are often embodied in a state’s common law and have lost popularity in recent years (Key v. State, 2011). Thus many states have abolished arbitrary time limits for the victim’s death in favor of ordinary principles of legal causation (Rogers v. Tennessee, 2011). Death timeline rules are not to be confused with the statute of limitations, which is the time limit the government has to prosecute a criminal defendant.

Figure 4.11 Diagram of the Elements of a Crime 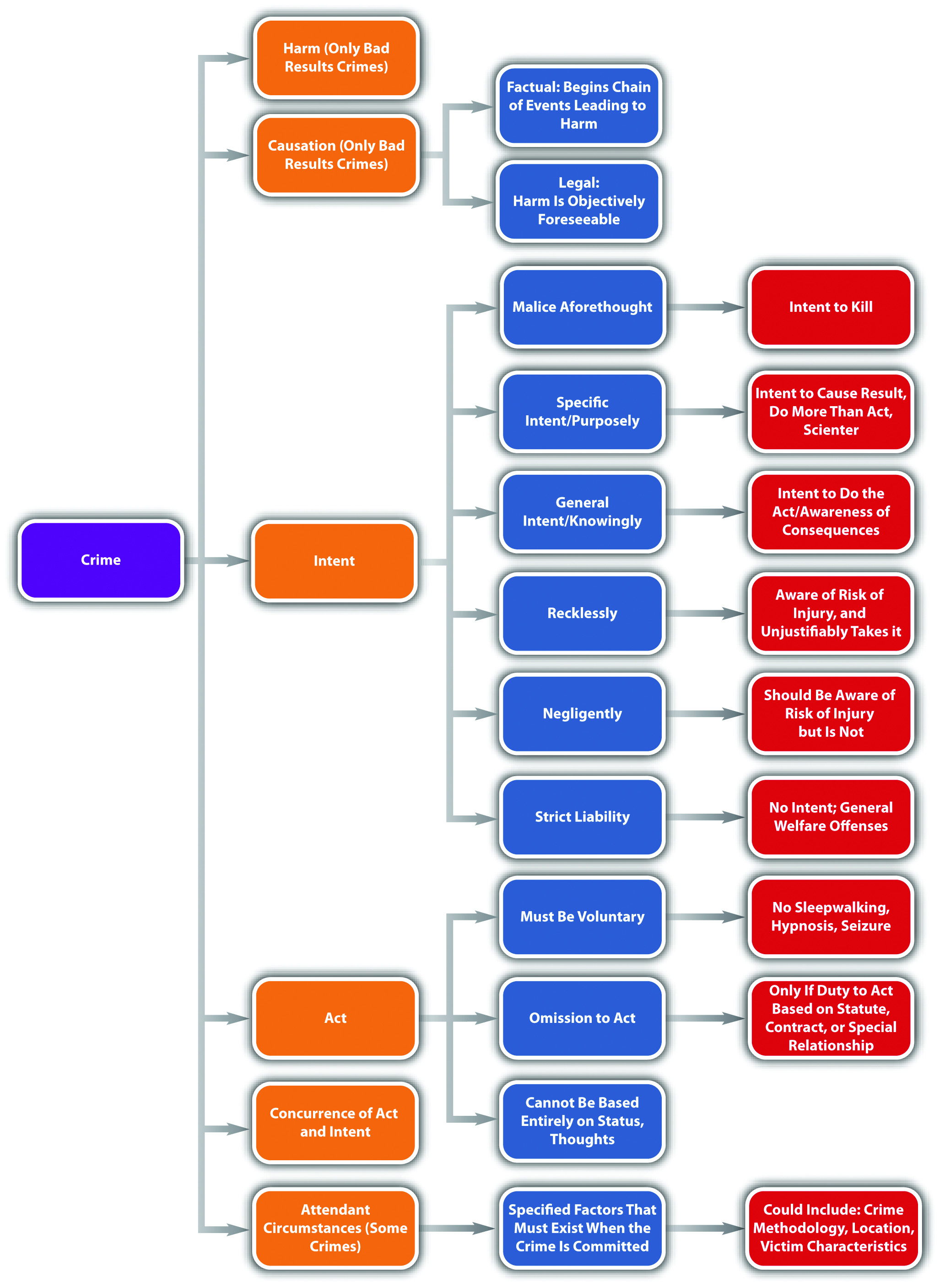