Are you reading this sentence? Does it make sense to you? When you read the words I wrote, what do you hear? A voice in your head? Words across the internal screen of your mind? If it makes sense, then you may very well hear the voice of the author as you read along, finding meaning in these arbitrary symbols packaged in discrete units called words. The words themselves have no meaning except that which you give them.

For example, I’ll write the word “home,” placing it in quotation marks to denote its separation from the rest of this sentence. When you read that word, what comes to mind for you? A specific place? Perhaps a building that could also be called a house? Images of people or another time? “Home,” like “love” and many other words, is quite individual and open to interpretation.

Still, even though your mental image of home may be quite distinct from mine, we can communicate effectively. You understand that each sentence has a subject and verb, and a certain pattern of word order, even though you might not be consciously aware of that knowledge. You weren’t born speaking or writing, but you mastered—or, more accurately, are still mastering as we all are—these important skills of self-expression. The family, group, or community wherein you were raised taught you the code. The code came in many forms. When do you say “please” or “thank you,” and when do you remain silent? When is it appropriate to communicate? If it is appropriate, what are the expectations and how do you accomplish it? You know because you understand the code.

We often call this code “language”: a system of symbols, words, and/or gestures used to communicate meaning. Does everyone on earth speak the same language? Obviously, no. People are raised in different cultures, with different values, beliefs, customs, and different languages to express those cultural attributes. Even people who speak the same language, like speakers of English in London, New Delhi, or Cleveland, speak and interact using their own words that are community-defined, self-defined, and have room for interpretation. Within the United States, depending on the context and environment, you may hear colorful sayings that are quite regional, and may notice an accent, pace, or tone of communication that is distinct from your own. This variation in our use of language is a creative way to form relationships and communities, but can also lead to miscommunication.

Words themselves, then, actually hold no meaning. It takes you and me to use them to give them life and purpose. Even if we say that the dictionary is the repository of meaning, the repository itself has no meaning without you or me to read, interpret, and use its contents. Words change meaning over time. “Nice” once meant overly particular or fastidious; today it means pleasant or agreeable. “Gay” once meant happy or carefree; today it refers to homosexuality. The dictionary entry for the meaning of a word changes because we change how, when, and why we use the word, not the other way around. Do you know every word in the dictionary? Does anyone? Even if someone did, there are many possible meanings of the words we exchange, and these multiple meanings can lead to miscommunication.

Business communication veterans often tell the story of a company that received an order of machine parts from a new vendor. When they opened the shipment, they found that it contained a small plastic bag into which the vendor had put several of the parts. When asked what the bag was for, the vendor explained, “Your contract stated a thousand units, with maximum 2 percent defective. We produced the defective units and put them in the bag for you.” If you were the one reading that contract, what would “defective” mean to you? We may use a word intending to communicate one idea only to have a coworker miss our meaning entirely.

Sometimes we want our meaning to be crystal clear, and at other times, less so. We may even want to present an idea from a specific perspective, one that shows our company or business in a positive light. This may reflect our intentional manipulation of language to influence meaning, as in choosing to describe a car as “preowned” or an investment as a “unique value proposition.” We may also influence other’s understanding of our words in unintentional ways, from failing to anticipate their response, to ignoring the possible impact of our word choice.

Languages are living exchange systems of meaning, and are bound by context. If you are assigned to a team that coordinates with suppliers from Shanghai, China, and a sales staff in Dubuque, Iowa, you may encounter terms from both groups that influence your team.

As long as there have been languages and interactions between the people who speak them, languages have borrowed words (or, more accurately, adopted—for they seldom give them back). Think of the words “boomerang,” “limousine,” or “pajama”; do you know which languages they come from? Did you know that “algebra” comes from the Arabic word “al-jabr,” meaning “restoration”?

Does the word “moco” make sense to you? It may not, but perhaps you recognize it as the name chosen by Nissan for one of its cars. “Moco” makes sense to both Japanese and Spanish speakers, but with quite different meanings. The letters come together to form an arbitrary word that refers to the thought or idea of the thing in the semantic triangle (see Figure 2.9). 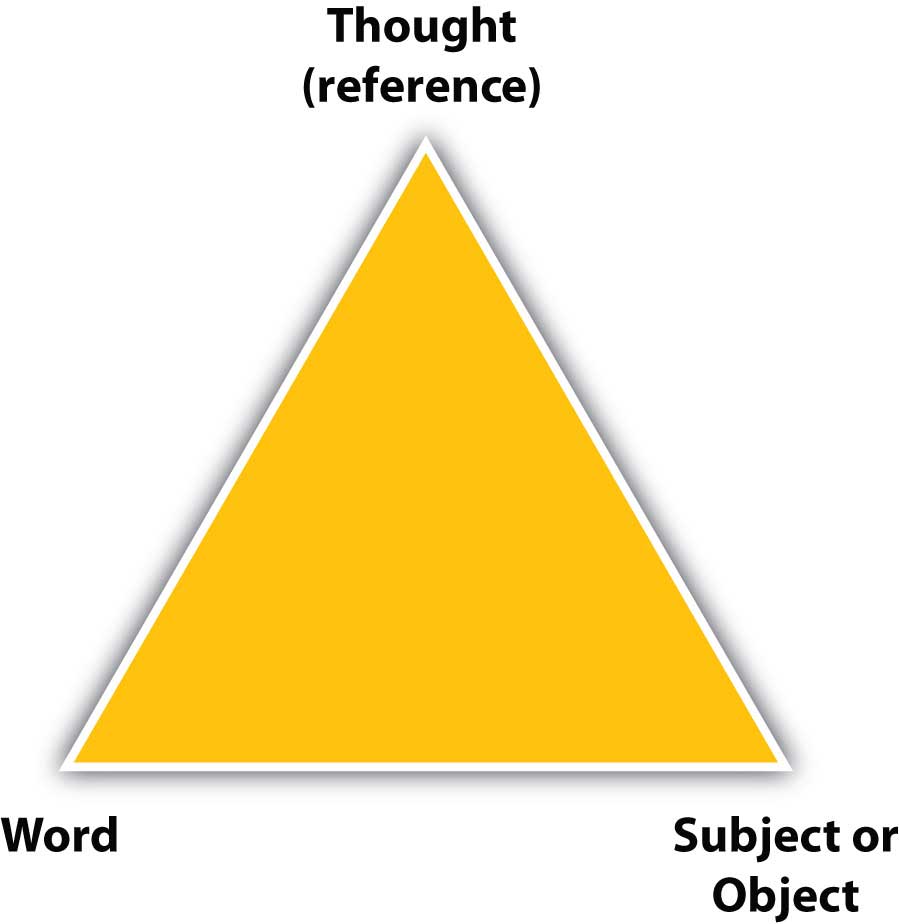 Source: Adapted from Ogden and Richards.

This triangle illustrates how the word (which is really nothing more than a combination of four letters) refers to the thought, which then refers to the thing itself. Who decides what “moco” means? To the Japanese, it may mean “cool design,” or even “best friend,” and may be an apt name for a small, cute car, but to a Spanish speaker, it means “booger” or “snot”—not a very appealing name for a car.

Each letter stands for a sound, and when they come together in a specific way, the sounds they represent when spoken express the “word” that symbolizes the event (McLean, 2003). For our discussion, the key word we need to address is “symbolizes.” The word stands in for the actual event, but is not the thing itself. The meaning we associate with it may not be what we intended. For example, when Honda was contemplating the introduction of the Honda Fit, another small car, they considered the name “Fitta” for use in Europe. As the story goes, the Swedish Division Office of Honda explained that “fitta” in Swedish is a derogatory term for female reproductive organ. The name was promptly changed to “Jazz.”

The meaning, according to Hayakawa, is within us, and the word serves as a link to meaning. What will your words represent to the listener? Will your use of a professional term enhance your credibility and be more precise with a knowledgeable audience, or will you confuse them?

Language is a system of words used as symbols to convey ideas, and it has rules of syntax, semantics, and context. Words have meaning only when interpreted by the receiver of the message.

Odgen, C., & Richards, I. (1932). The meaning of meaning: A study of the influence of language upon thought and of the science of symbolism. New York, NY: Harcourt Brace & World.