Let’s get into a time machine and travel way, way back to join early humans in prehistoric times. Their needs are like ours today: they cannot exist or thrive without air, food, and water—and a sense of belonging. How did they meet these needs? Through cooperation and competition. If food scarcity was an issue, who got more and who got less? This serves as our first introduction to roles, status and power, and hierarchy within a group. When food scarcity becomes an issue, who gets to keep their spoon? In some Latin American cultures, having a job or earning a living is referred to by the slang term cuchara, which literally means “spoon” and figuratively implies food, safety, and security.

Now let’s return to the present and enter a modern office. Cubicles define territories and corner offices denote status. In times of economic recession or slumping sales for the company, there is a greater need for cooperation, and there is competition for scarce resources. The loss of a “spoon”—or of one’s cubicle—may now come in the form of a pink slip, but it is no less devastating.

We form self-identities through our communication with others, and much of that interaction occurs in a group context. A group may be defined as three or more individuals who affiliate, interact, or cooperate in a familial, social, or work context. Group communication may be defined as the exchange of information with those who are alike culturally, linguistically, and/or geographically. Group members may be known by their symbols, such as patches and insignia on a military uniform. They may be known by their use of specialized language or jargon; for example, someone in information technology may use the term “server” in reference to the Internet, whereas someone in the food service industry may use “server” to refer to the worker who takes customer orders in a restaurant. Group members may also be known by their proximity, as in gated communities. Regardless of how the group defines itself, and regardless of the extent to which its borders are porous or permeable, a group recognizes itself as a group. Humans naturally make groups a part of their context or environment.

Types of Groups in the Workplace

As a skilled business communicator, learning more about groups, group dynamics, management, and leadership will serve you well. Mergers, forced sales, downsizing, and entering new markets all call upon individuals within a business or organization to become members of groups. In the second of the Note 19.1 “Introductory Exercises” for this chapter, you were asked to list the professional (i.e., work-related) groups you interact with in order of frequency. What did your list include? Perhaps you noted your immediate coworkers, your supervisor and other leaders in your work situation, members of other departments with whom you communicate, and the colleagues who are also your personal friends during off-work times. Groups may be defined by function. They can also be defined, from a developmental viewpoint, by the relationships within them. Groups can also be discussed in terms of their relationship to the individual and the degree to which they meet interpersonal needs.

Some groups may be assembled at work to solve problems, and once the challenge has been resolved, they dissolve into previous or yet to be determined groups. Functional groups like this may be immediately familiar to you. You take a class in sociology from a professor of sociology, who is a member of the discipline of sociology. To be a member of a discipline is to be a disciple, and adhere to a common framework to for viewing the world. Disciplines involve a common set of theories that explain the world around us, terms to explain those theories, and have grown to reflect the advance of human knowledge. Compared to your sociology instructor, your physics instructor may see the world from a completely different perspective. Still, both may be members of divisions or schools, dedicated to teaching or research, and come together under the large group heading we know as the university.

In business, we may have marketing experts who are members of the marketing department, who perceive their tasks differently from a member of the sales staff or someone in accounting. You may work in the mailroom, and the mailroom staff is a group in itself, both distinct from and interconnected with the larger organization. 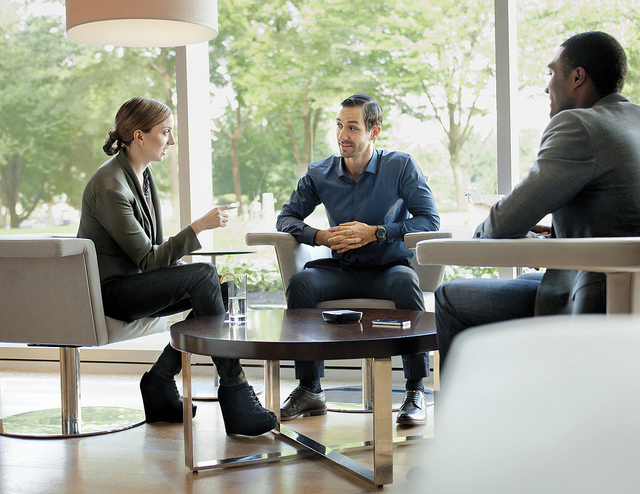 Groups and teams are an important part of business communication.

Relationships are part of any group, and can be described in terms of status, power, control, as well as role, function, or viewpoint. Within a family, for example, the ties that bind you together may be common experiences, collaborative efforts, and even pain and suffering. The birth process may forge a relationship between mother and daughter, but it also may not. An adoption may transform a family. Relationships are formed through communication interaction across time, and often share a common history, values, and beliefs about the world around us.

In business, an idea may bring professionals together and they may even refer to the new product or service as their “baby,” speaking in reverent tones about a project they have taken from the drawing board and “birthed” into the real world. As in family communication, work groups or teams may have challenges, rivalries, and even “birthing pains” as a product is developed, adjusted, adapted, and transformed. Struggles are a part of relationships, both in families and business, and form a common history of shared challenged overcome through effort and hard work.

Through conversations and a shared sense that you and your coworkers belong together, you meet many of your basic human needs, such as the need to feel included, the need for affection, and the need for control (Schutz, W., 1966). In a work context, “affection” may sound odd, but we all experience affection at work in the form of friendly comments like “good morning,” “have a nice weekend,” and “good job!” Our professional lives also fulfill more than just our basic needs (i.e., air, food, and water, as well as safety). While your work group may be gathered together with common goals, such as to deliver the mail in a timely fashion to the corresponding departments and individuals, your daily interactions may well go beyond this functional perspective.

In the same way, your family may provide a place for you at the table and meet your basic needs, but they also may not meet other needs. If you grow to understand yourself and your place in a way that challenges group norms, you will be able to choose which parts of your life to share and to withhold in different groups, and to choose where to seek acceptance, affection, and control.

There are fundamentally two types of groups that can be observed in many contexts, from church to school, family to work. These two types are primary and secondary groups. The hierarchy denotes the degree to which the group(s) meet your interpersonal needs. Primary groups meet most, if not all, of one’s needs. Groups that meet some, but not all, needs are called secondary groups. Secondary groups often include work groups, where the goal is to complete a task or solve a problem. If you are a member of the sales department, your purpose is to sell.

In terms of problem solving, work groups can accomplish more than individuals can. People, each of whom have specialized skills, talents, experience, or education come together in new combinations with new challenges, find new perspectives to create unique approaches that they themselves would not have formulated alone.

If Two’s Company and Three’s a Crowd, What Is a Group?

This old cliché refers to the human tendency to form pairs. Pairing is the most basic form of relationship formation; it applies to childhood best friends, college roommates, romantic couples, business partners, and many other dyads (two-person relationships). A group, by definition, includes at least three people. We can categorize groups in terms of their size and complexity.

When we discuss demographic groups as part of a market study, we may focus on large numbers of individuals that share common characteristics. If you are the producer of an ecologically innovative car such as the Smart ForTwo, and know your customers have an average of four members in their family, you may discuss developing a new model with additional seats. While the target audience is a group, car customers don’t relate to each other as a unified whole. Even if they form car clubs and have regional gatherings, a newsletter, and competitions at their local race tracks each year, they still subdivide the overall community of car owners into smaller groups.

The larger the group grows, the more likely it is to subdivide. Analysis of these smaller, or microgroups, is increasingly a point of study as the Internet allows individuals to join people of similar mind or habit to share virtually anything across time and distance. A microgroup is a small, independent group that has a link, affiliation, or association with a larger group. With each additional group member the number of possible interactions increases (Harris, T., and Sherblom, J., 1999; McLean, S., 2003).

Small groups normally contain between three and eight people. One person may involve intrapersonal communication, while two may constitute interpersonal communication, and both may be present within a group communication context. You may think to yourself before making a speech or writing your next post, and you may turn to your neighbor or coworker and have a side conversation, but a group relationship normally involves three to eight people, and the potential for distraction is great.

In Table 19.1 “Possible Interaction in Groups”, you can quickly see how the number of possible interactions grows according to how many people are in the group. At some point, we all find the possible and actual interactions overwhelming and subdivide into smaller groups. For example, you may have hundreds of friends on MySpace or Facebook, but how many of them do you regularly communicate with? You may be tempted to provide a number greater than eight, but if you exclude the “all to one” messages, such as a general tweet to everyone (but no one person in particular), you’ll find the group norms will appear.

Group norms are customs, standards, and behavioral expectations that emerge as a group forms. If you post an update every day on your Facebook page and your friends stop by to post on your wall and comment, not posting for a week will violate a group norm. They will wonder if you are sick or in the hospital where you have no access to a computer to keep them updated. If, however, you only post once a week, the group will come to naturally expect your customary post. Norms involve expectations that are self and group imposed and that often arise as groups form and develop.

If there are more than eight members, it becomes a challenge to have equal participation, where everyone has a chance to speak, listen, and respond. Some will dominate, others will recede, and smaller groups will form. Finding a natural balance within a group can also be a challenge. Small groups need to have enough members to generate a rich and stimulating exchange of ideas, information, and interaction, but not so many people that what each brings cannot be shared (Galanes, G., Adams, K., and Brilhart, J., 2000).

Forming groups fulfills many human needs, such as the need for affiliation, affection, and control; individuals also need to cooperate in groups to fulfill basic survival needs.