Above the oceans just north and south of the equator, a weather phenomenon called a tropical cyclone can develop that can drastically alter the physical and cultural landscape if it reaches land. In the North Atlantic Ocean and the Caribbean Sea, this weather pattern is called a hurricane. In the North Pacific Ocean, the same type of weather pattern is called a typhoon. In the Indian Ocean region and in the South Pacific Ocean, it is called a tropical cyclone or just a cyclone. All these storms are considered tropical because they almost always develop between the Tropics of Cancer and Capricorn.

Figure 5.35 Cyclones, Hurricanes, and Typhoons and Their Respective Locations around the World 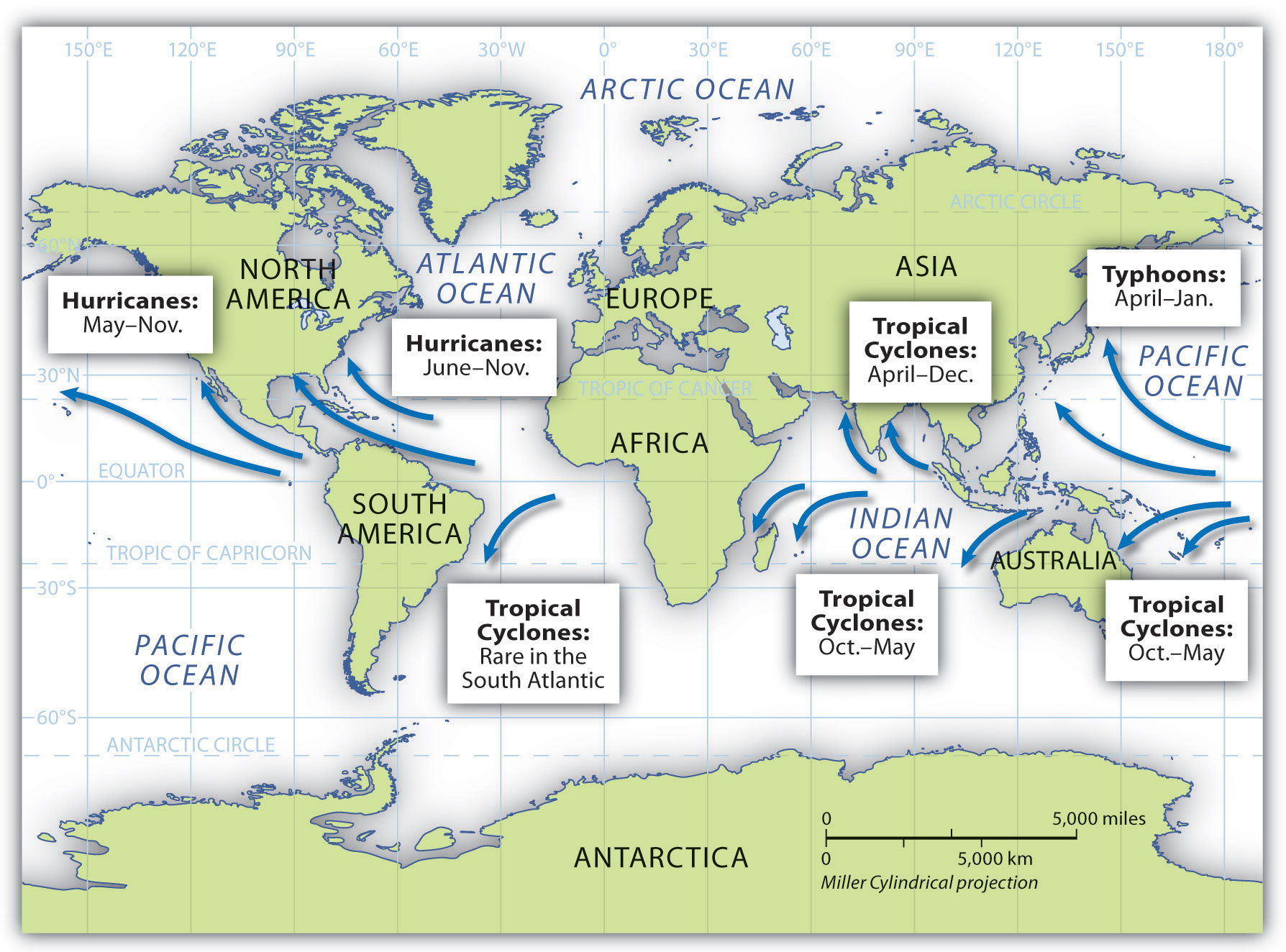 Hurricanes develop over water that is warmer than 80 ºF. As the air heats, it rises rapidly, drawing incoming air to replace the rising air and creating strong wind currents and storm conditions. The rapidly rising humid air then cools and condenses, resulting in heavy rains and a downdraft of cooler air. The rotation of the earth causes the storm to rotate in a cyclonic pattern. North of the equator, tropical storms rotate in a counterclockwise direction. South of the equator, tropical storms rotate in a clockwise direction.

Hot air rises. A water temperature of at least 80 ºF can sustain rising air in the development of a tropical depression. These storms continue to be driven by the release of the latent heat of condensation, which occurs when moist air is carried upward and its water vapor condenses. This heat is distributed within the storm to energize it. As the system gains strength, a full-scale hurricane can develop. Rising warm air creates a low-pressure area that draws in air from the surface. This action pushes water toward the center, creating what is called a storm surge. Storm surges can average five to twenty feet or more depending on the category of the hurricane. Cyclonic rotation is created by rotation of the earth in a process called the Coriolis effect. The Coriolis effect is less prominent along the equator, so tropical cyclones usually do not develop within five degrees north or south of the equator.

When a hurricane makes landfall (comes ashore), the storm surge causes extensive flooding. More people are killed by flooding because of the storm surge than by any other hurricane effect. At the center of the cyclonic system is the hurricane’s eye, where there is a downdraft of sinking air but the wind is calm and there are no clouds. The eye can extend from one to one hundred miles or more. Many people who have been in the eye of the hurricane believe the storm has passed, but in reality they are in the center of it.

Bordering the eye of a storm is the eye wall, where the strongest winds and heaviest rainfall are found. This is the most violent part of the hurricane. Beyond the eye wall are feeder bands, with thunderstorms and rain showers that spiral inward toward the eye wall. Feeder bands can extend out for many miles and increase as the heat engine feeds the storm. Hurricanes lose their energy when they move over land because of the lack of heat generation. Once on land, the storm system breaks down. Rainfall and winds can continue, but with decreased intensity. 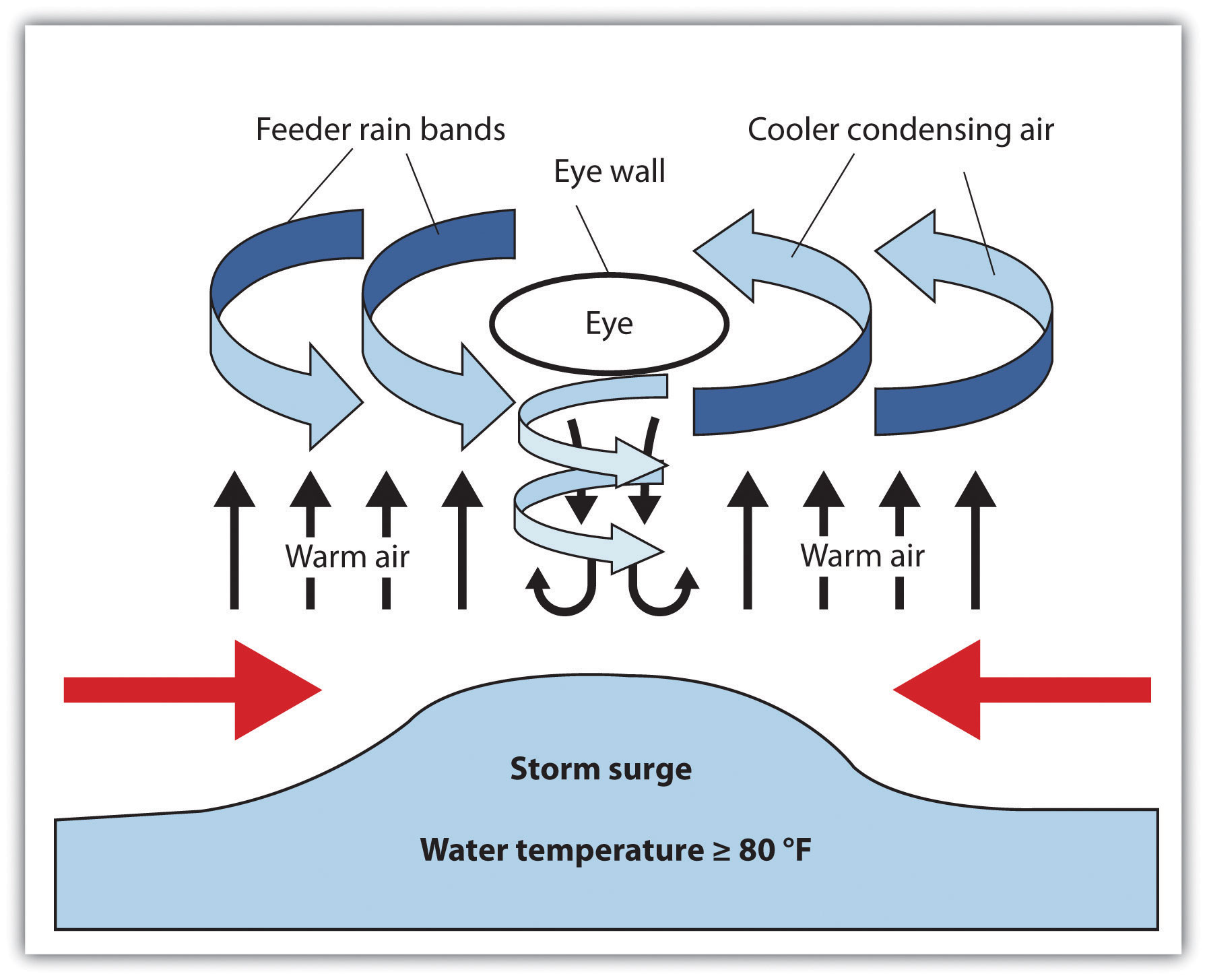 Centuries ago, the Spanish used the term hurakan, an indigenous word for “evil spirits” or “devil wind,” to name the storms that sank their ships in the Caribbean. Hurricanes are rated according to sustained wind speed using the Saffir-Simpson Scale. This scale rates a hurricane according to five categories (see Figure 5.37 “Saffir-Simpson Hurricane Scale”). Category 1 hurricanes have sustained wind speeds of at least seventy-four miles per hour and can inflict heavy damage to buildings, roofs, windows, and the environment. Category 5 hurricanes have sustained winds of more than 155 miles per hour and destroy everything in their paths. Hurricanes can also spawn tornadoes, which increase their potential for destruction. 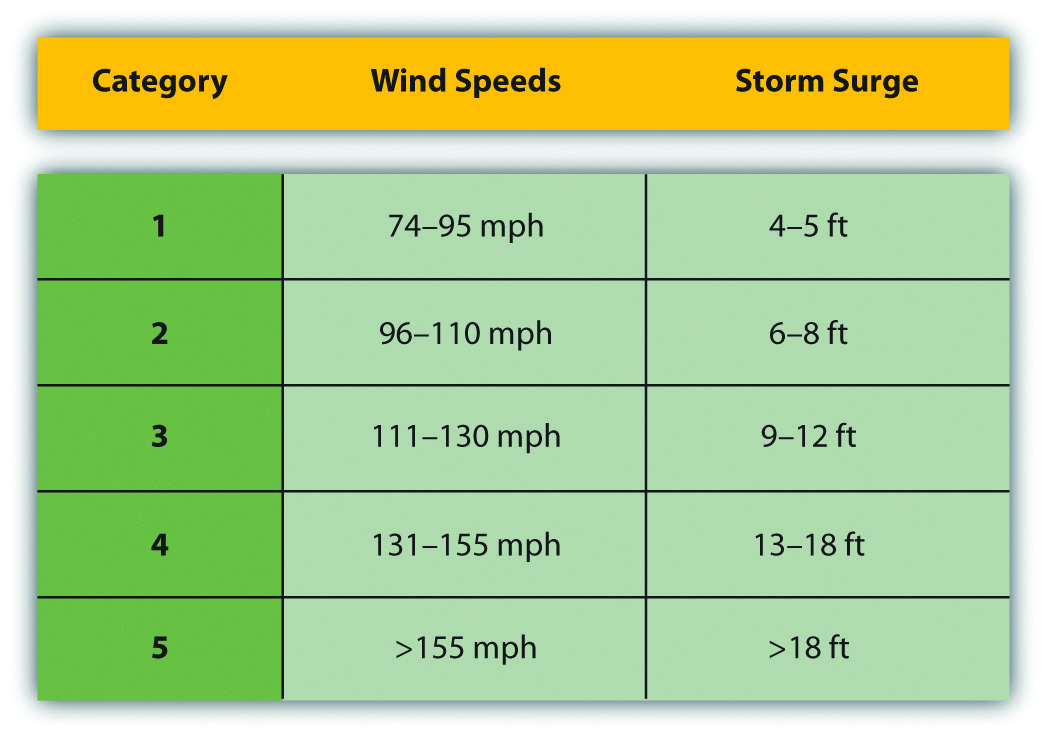 Annually, more than one hundred tropical disturbances develop in the North Atlantic, but only about ten make it to a tropical storm status and five to six become hurricanes. Only two or three hit the United States in a typical year. Hurricane season for the North Atlantic lasts from June 1 to November 30. Tropical cyclones develop during the warmest season of the year when the water temperature is the highest. Though these weather patterns can bring enormous devastation to the landscape, they also redistribute moisture in the form of rain and help regulate global temperatures.

The devastating nature of tropical cyclones is the main concern when forecasting a potential storm. In 1970, the Bholo cyclone hit the coast of Bangladesh, resulting in the death of between three hundred thousand and one million people. A number of cyclones that killed more than one hundred thousand people each have hit Bangladesh in the past century. Typhoon Tip in the Northwest Pacific in 1979 is the largest tropical cyclone on record, with wind speeds of more than 190 miles per hour and a total diameter of more than 1,350 miles—equal to the distance from the Mexican border to the Canadian border in the United States. Typhoons can be, on average, twice the size of hurricanes.

Figure 5.38 Hurricane Katrina at Various Stages of Its Development across the Gulf of Mexico 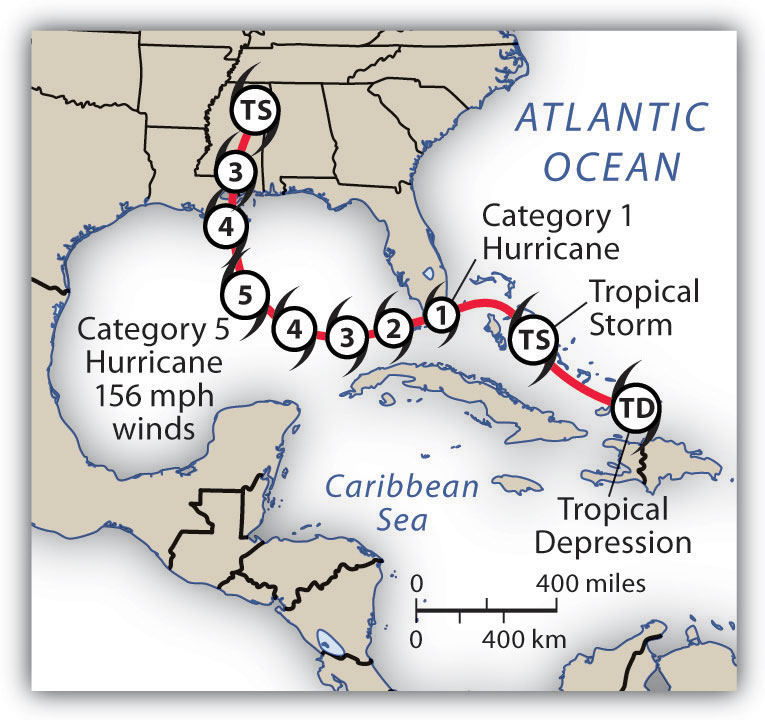 Hurricane Camille was the strongest US hurricane on record at landfall, with sustained winds of 190 miles per hour and wind gusts of up to 210 miles per hour. Camille hit the US Mississippi coast in 1969 as a category 5 hurricane. It devastated everything in its path, killing 259 people. Hurricane Katrina in 2005 was one of the most costly storms to impact the United States. Katrina started out as a tropical depression while in the Bahamas. The storm reached a category 5 hurricane as it passed through the Gulf of Mexico but diminished in strength when making landfall in Louisiana, with sustained winds of 125 miles per hour (a strong category 3 hurricane). Katrina caused widespread devastation along the central Gulf Coast and devastated the city of New Orleans. At least 1,836 people lost their lives, and the cleanup cost an estimated $100 billion.

Since records were started in 1851 for hurricanes in the Atlantic Basin, there have been thirty-two hurricanes that reached category 5 in the region. A few of them have reached all the way to the Central American coast. Hurricane Mitch hit the coast of Central America in 1998 and dumped over seventy-five inches of rain across the countries of Honduras, El Salvador, Nicaragua, and Guatemala. Devastating winds and heavy rain caused the deaths of up to twenty thousand people. Destructive category 5 hurricanes Edith and Felix made landfall in Nicaragua in 1971 and 2007, respectively. The Yucatán Peninsula and the coast of Mexico have also witnessed a number of devastating category 5 hurricanes.

The Caribbean Basin is located in the path of many hurricanes developing out of the Cape Verde region of the North Atlantic. For example, 2008 was a particularly devastating hurricane season, with sixteen tropical storms and eight full-scale hurricanes, five of which caused massive devastation. Three category 4 hurricanes (Ike, Gustav, and Paloma) cut through the northern Caribbean to hit the Greater Antilles. The most devastating was Ike, which ripped through the Caribbean, across the entire length of Cuba, and then on to the Gulf Coast of Louisiana and Texas. Ike’s immense size contributed to the fact that it was the third most costly hurricane on record. Ike caused an estimated $7.3 billion in damage to Cuba and more than $29 billion in damage in the United States. Hurricane Gustav made landfall in Hispaniola and Jamaica before increasing in strength and causing about $3.1 billion in damage to Cuba. In November of 2008, Hurricane Paloma made landfall in Cuba and caused an additional $300 million in damage to the island. Many of the other Caribbean islands were also devastated by the hurricanes that hit the region in 2008. 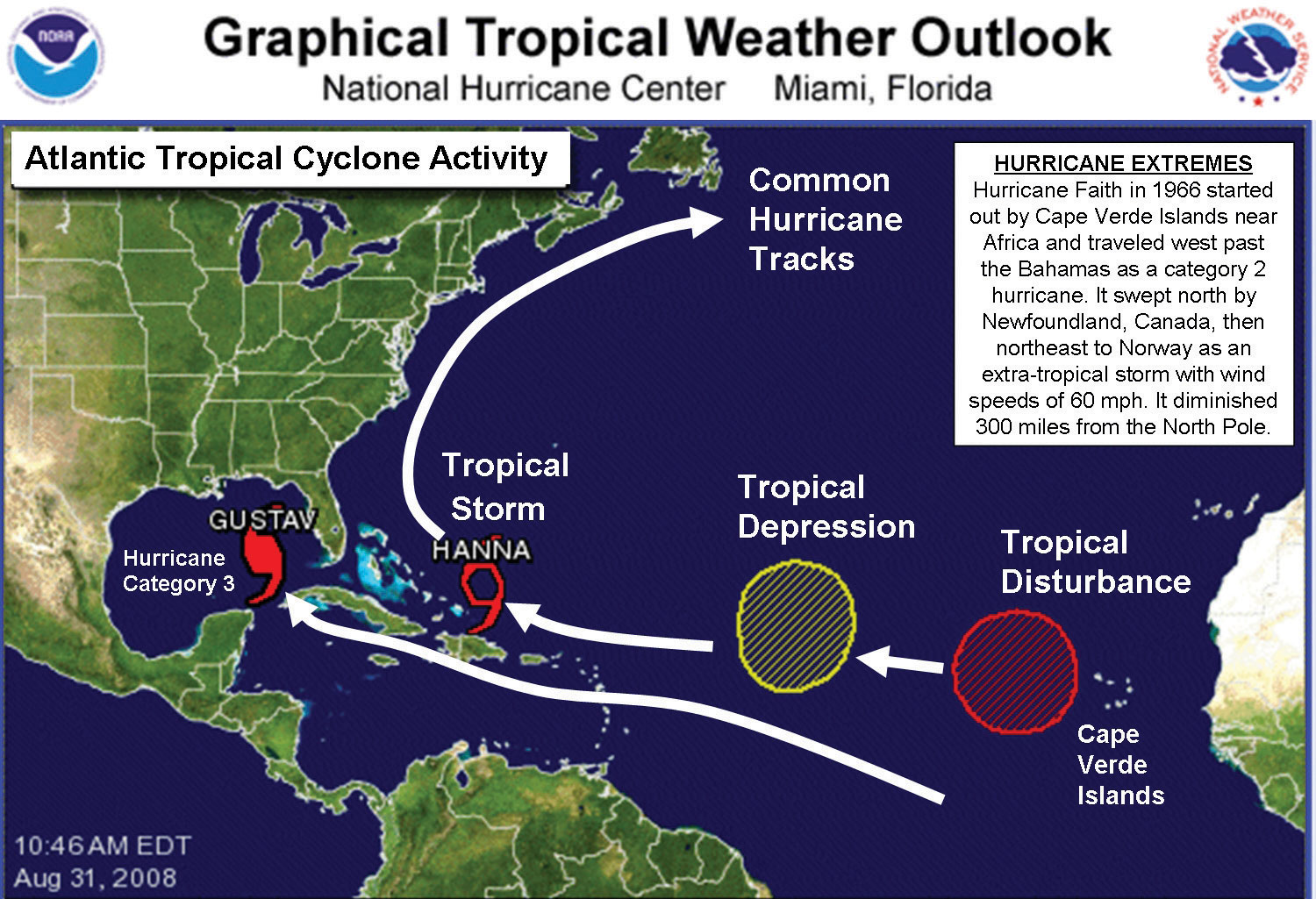 This photo indicates hurricane Gustav and tropical storm Hanna, as well as an existing tropical depression (which became Hurricane Ike) and a tropical disturbance. Tropical Storm Hanna later developed into a full-scale hurricane.