The continent covers an extensive range of latitude. The equator cuts through the northern part of the continent directly through the mouth of the mighty Amazon River. The country of Ecuador is located on the equator—hence its name. The equatorial region is dominated by the tropical climates of the immense Amazon Basin. The Tropic of Capricorn runs directly through the latitude of São Paulo, Brazil, and Chile’s Atacama Desert, which reveals that most of the continent is in the zone of the tropics to the north. South of the Tropic of Capricorn is the Southern Cone of South America, home to the physical regions of the Pampas and Patagonia. Tierra del Fuego is the southern tip of the realm with territory in both Argentina and Chile. On the south side of the Tierra del Fuego archipelago is Cape Horn, which is considered the southernmost land point of the continent. The Diego Ramírez Islands south of Cape Horn mark the southern boundary of South America.

A number of noted island groups are usually affiliated with the physical region of South America. The Galapagos Islands are territorially a part of the country of Ecuador. The Falkland Islands, often referred to as the Malvinas, are located off the southern coast of Argentina. They are physically associated with South America but are administered and controlled by Great Britain as an overseas territory. Argentina has claimed the Falkland Islands and has battled Great Britain for them. Chile controls the noted Easter Island and the Robinson Crusoe Island in the Pacific Ocean. Various islands in the Lesser Antilles of the Caribbean—such as the Dutch islands of Aruba, Curacao, and Bonaire—are sometimes associated with South America because of their proximity to the continent. They are included in Section 5.4 “The Caribbean” on the Caribbean and are more often associated with Middle America. 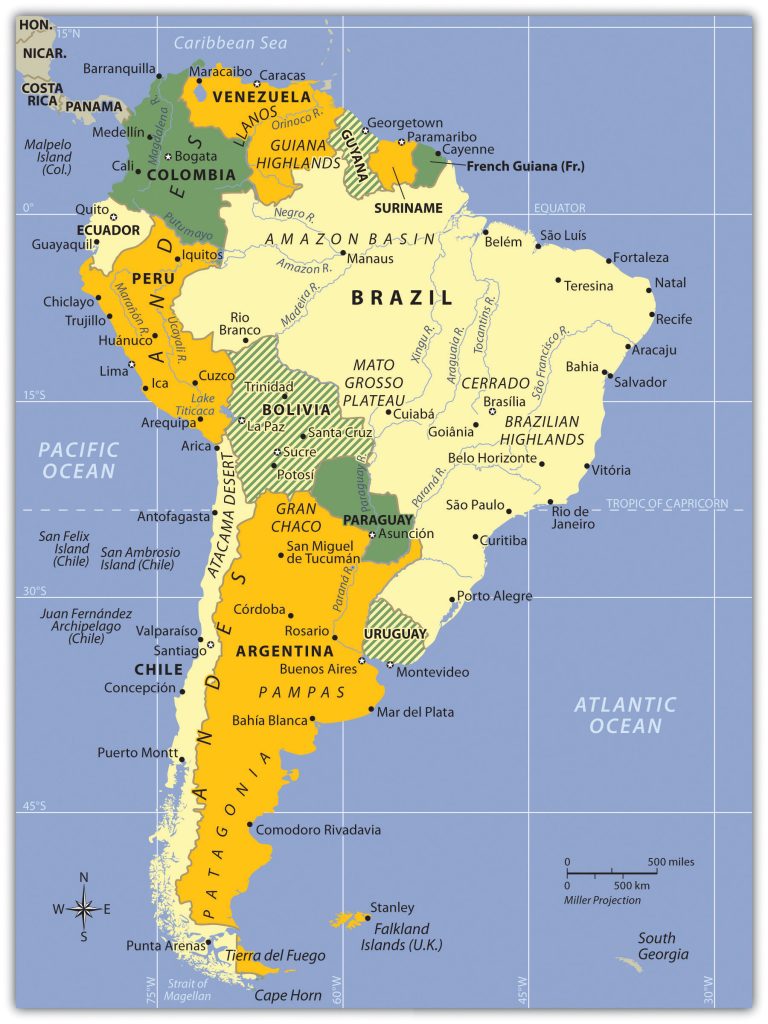 The main two physical features of South America are the Andes Mountains and the Amazon River.