The islands and the mainland of Southeast Asia include a wide array of physical and cultural landscapes. The entire realm is located in the tropics except the northernmost region of Burma (Myanmar), which extends north of the Tropic of Cancer. A tropical Type A climate dominates the region and rainfall is generally abundant. The tropical waters of the region help moderate the climate. Southeast Asia is located between the Indian Ocean on the west and the Pacific Ocean on the east. Bordering the many islands and peninsulas are various seas, bays, straits, and gulfs that help create the complex maritime boundaries of the realm. The South China Sea is a major body of water that acts as a separator between the mainland and the insular region. The thousands of islands that make up the various countries or lie along their coastal waters create a matrix of passageways and unique physical geography.

The three longest rivers of the realm, Mekong, Red, and Irrawaddy, are located on the mainland and have their headwaters in the high elevations of Himalayan ranges of China. The Mekong River makes its way from the high Himalayas in China and helps form the political borders of Laos and Thailand on its way through Cambodia to Vietnam where it creates a giant delta near Ho Chi Minh City (Saigon). The Red River flows out of China and through Hanoi to the Red River delta on the Gulf of Tonkin. The Irrawaddy River flows through the length of Burma providing for the core area of the country. Another major river of the mainland is the Chao Phraya of Thailand. With its many tributaries, the Chao Phraya creates a favorable core area that is home to the largest population of the country. Many other rivers can be found on both the mainland and the insular region. The rivers transport water and sediments from the interior to the coasts, often creating large deltas with rich soils that are major agricultural areas. Multiple crops of rice and food products can be grown in the fertile river valleys and deltas. The agricultural abundance is needed to support the ever-increasing populations of the realm.

Tectonic plate activity has been responsible for the existence of the many islands and has created the mountainous terrain of the various countries. High mountain ranges can have peaks that reach elevations of over fifteen thousand feet. The high-elevation ranges of New Guinea, which are along the equator, actually have glaciers, ice, and snow that remain year-round. The island of Borneo, in the center of the insular region, is actually a segment of ancient rock that has been pushed upward by tectonic forces to form a mountainous land mass. The mountains on Borneo have been worn down over time by erosion. Mountains and highlands stretch across the northern border of the realm along the borders with India and China. The interior nature of this border makes it less accessible. Similar dynamics can be found in the interior of the islands of the insular region, where the isolation and remoteness have helped create the environmental conditions for unique flora and fauna. In the highland areas the human cultural landscape can be diverse. Time and isolation have worked together to form the traditions and cultural ways that give local groups their identity and heritage.

Tectonic activity makes the region vulnerable to earthquakes and volcanic eruptions. The volcanic peak of Mt. Pinatubo, in the Philippines, erupted in 1991, spewing ash and smoke into the atmosphere and impacting much of the planet. An earthquake of 9.0 magnitude occurred off the coast of the Indonesian island of Sumatra in 2004 and caused widespread disaster throughout the wider region of the Indian Ocean. As many as one hundred fifty thousand deaths were reported, mainly from flooding. A thirty-five-foot-high wall of water from the tsunami devastated many coastal areas from Thailand to India.

Southeast Asia has not escaped the impact of globalization, both colonial and corporate. As Europeans expanded their colonial activities, they made their way into Southeast Asia. Southeast Asia was heavily influenced by European colonialism. The only area of the region that was not colonized by the Europeans was Thailand, which was called Siam during the colonial era. It remained an independent kingdom throughout the colonial period and was a buffer state between French and British colonizers. The Japanese colonial empire controlled much of Southeast Asia before World War II.

Some of the countries and regions of Southeast Asia became known by their colonial connection. Indonesia was once referred to as the Dutch East Indies, which was influential in the labeling of the Caribbean as the West Indies. French Indochina is a term legitimized for historical references to the former French claims in Southeast Asia. Malaya and British Borneo each had its own currency based on a dollar unit that was legal tender for the regions of the Federation of Malaya, Singapore, Sarawak, North Borneo, and Brunei. Independence from the European powers and freedom from Japanese imperialism by the end of World War II provided a new identification for the various countries of the realm. Cultural and economic ties remain between many former colonies and their European counterparts. 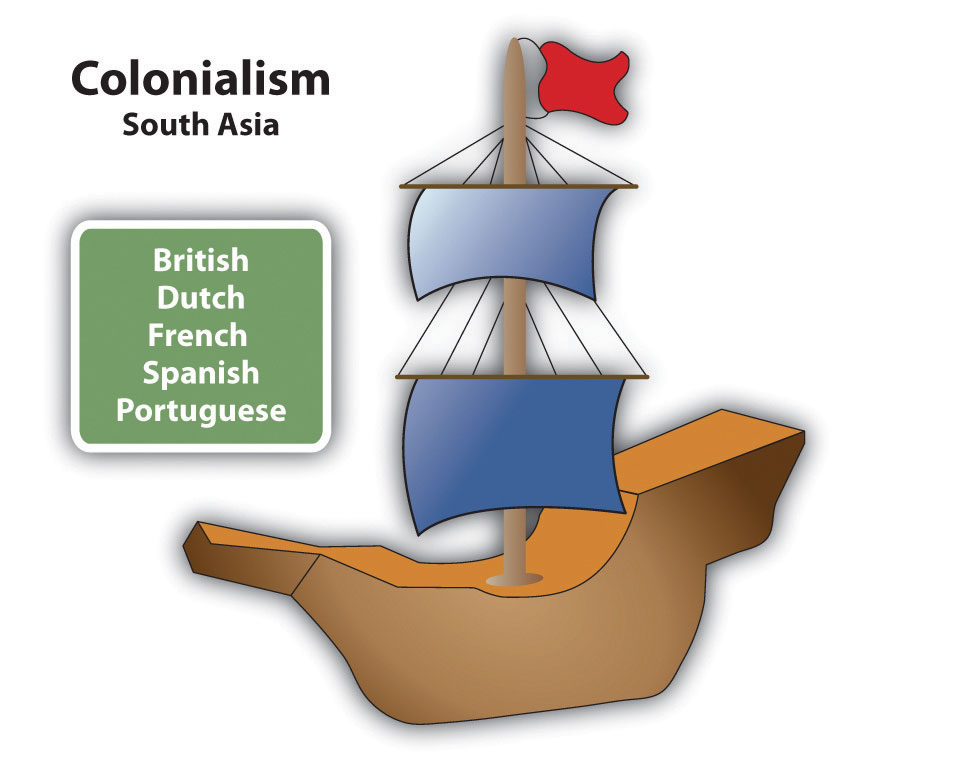 Southeast Asia was colonized by Europeans and later by Japan.

East Timor, a former Portuguese colony south of Indonesia, has been the most recent colony to gain independence. Timor is an island just north of Australia. The western portion is claimed by Indonesia. The whole island was annexed to Indonesia in 1975. As a result of separatist movements that entailed conflict and violence, the eastern portion was finally granted independence in 2002. Since then, East Timor has been working to establish itself as a country and is now negotiating its offshore boundary to include important oil and gas reserves.

Southeast Asia has a population of more than six hundred million people; more than half the population lives on the many islands of Indonesia and the Philippines. The small island of Java in Indonesia is one of the most densely populated places on Earth. More than half of the two hundred forty-five million people who live in Indonesia live on the island of Java. The island of Luzon in the Philippines is also one of the more densely populated areas of the insular region. The Philippines has over one hundred million people, Vietnam has more than ninety million, and Thailand has about sixty-seven million. Local areas with high food-producing capacity are also high population centers, which would include deltas, river valleys, and fertile plains.

The ethnic mosaic of Southeast Asia is a result of the emergence of local differences between people that have evolved into identifiable cultural or ethnic groups. Though there are a multitude of specific ethnic groups, a number of the larger ones stand out with recognizable populations. On the mainland the Burmese, Thai, Khmer, and Vietnamese are the largest groups, coinciding with the physical countries from Burma to Vietnam. A similar situation can be found in the insular region. Many distinct groups can exist on the many islands of the region. The island of New Guinea, for example, has hundreds of local groups with their own languages and traditions. The large number of ethnic groups is dominated by Indonesians, Malays, and Filipinos, coinciding with the countries of Indonesia, Malaysia, and the Philippines. Each of these main groups has many subgroups that hold to their own cultural heritage in the areas where they exist. The many islands of Indonesia and the Philippines create the opportunity for diversity to continue to thrive, in spite of the globalization process that increased the interaction and communication opportunities between groups.

Indonesia is also home to the largest Muslim population in the world. All major religions can be found here. The Philippine population is predominantly Christian, but there is a minority Muslim community, including rebel insurgents. Most of people in Malaysia follow Islam. About 95 percent of the people in Thailand and more than 60 percent of the people in Laos are Buddhist. Hinduism is present in the Indonesian island of Bali and in various other locations in the region. Animism and local religions can be found in rural and remote areas. Clearly, Southeast Asia is a mix of many ethnic groups, each with its own history, culture, and religious preference.

Southeast Asia is also home to over thirty million overseas Chinese—ethnic Chinese who live outside of China. The Chinese exodus to the realm was the greatest during the last Chinese dynasties and during the colonial era. European colonial powers enhanced this migration pattern by leveraging the use of people with Chinese heritage in their governing over the local populations in the realm. Life has often been difficult for overseas Chinese. The Japanese occupation of the realm during World War II was a time of harsh discrimination against Chinese. Japanese occupation and colonialism diminished with the end of World War II. The overseas Chinese minority retained an economic advantage because of their former colonial status and their economic connections. Chinatowns emerged in many of the major cities of Southeast Asia. The discrimination against the Chinese, fueled by religious or socioeconomic differences, often continued after World War II by the local ethnic majorities. Nevertheless, overseas Chinese in Southeast Asia have been instrumental in promoting the global business arrangements that have established the Pacific Rim as a major player in the international economy.