Now that you have identified common purposes for writing and learned how to select appropriate content for a particular audience, you can think about the structure of a paragraph in greater detail. Composing an effective paragraph requires a method similar to building a house. You may have the finest content, or materials, but if you do not arrange them in the correct order, then the final product will not hold together very well.

This section covers the major components of a paragraph and examines how to develop an effective topic sentence.

Pick up any newspaper or magazine and read the first sentence of an article. Are you fairly confident that you know what the rest of the article is about? If so, you have likely read the topic sentence. An effective topic sentence combines a main idea with the writer’s personal attitude or opinion. It serves to orient the reader and provides an indication of what will follow in the rest of the paragraph. Read the following example.

Creating a national set of standards for math and English education will improve student learning in many states.

When writing a draft of an essay, allow a friend or colleague to read the opening line of your first paragraph. Ask your reader to predict what your paper will be about. If he or she is unable to guess your topic accurately, you should consider revising your topic sentence so that it clearly defines your purpose in writing.

Topic sentences contain both a main idea (the subject, or topic that the writer is discussing) and a controlling idea (the writer’s specific stance on that subject). Just as a thesis statement includes an idea that controls a document’s focus (as you will read about in Chapter 8 “The Writing Process: How Do I Begin?”), a topic sentence must also contain a controlling idea to direct the paragraph. Different writers may use the same main idea but can steer their paragraph in a number of different directions according to their stance on the subject. Read the following examples.

Although the main idea—marijuana—is the same in all three topic sentences, the controlling idea differs depending on the writer’s viewpoint.

Circle the main idea and underline the controlling idea in each of the following topic sentences.

Characteristics of a Good Topic Sentence

Choose the most effective topic sentence from the following sentence pairs.

Using the tips on developing effective topic sentences in this section, create a topic sentence on each of the following subjects. Remember to include a controlling idea as well as a main idea. Write your responses on your own sheet of paper.

When creating a workplace document, use the “top-down” approach—keep the topic sentence at the beginning of each paragraph so that readers immediately understand the gist of the message. This method saves busy colleagues precious time and effort trying to figure out the main points and relevant details.

Headings are another helpful tool. In a text-heavy document, break up each paragraph with individual headings. These serve as useful navigation aids, enabling colleagues to skim through the document and locate paragraphs that are relevant to them.

This section identifies the three major structural parts of a paragraph and covers how to develop a paragraph using transitional words and phrases.

Identifying Parts of a Paragraph 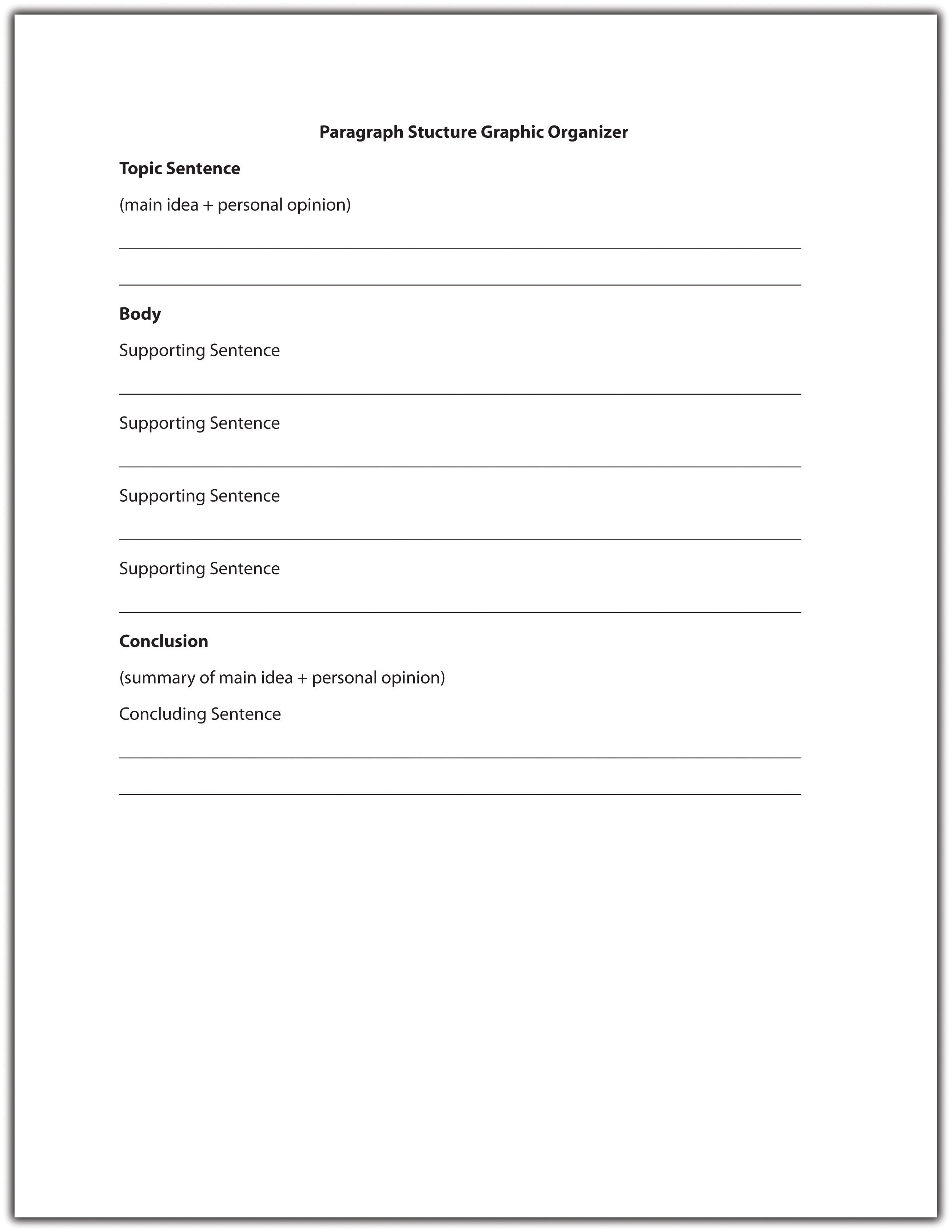 Read the following paragraph. The topic sentence is underlined for you.

After reading the new TV guide this week I had just one thought—why are we still being bombarded with reality shows? This season, the plague of reality television continues to darken our airwaves. Along with the return of viewer favorites, we are to be cursed with yet another mindless creation. Prisoner follows the daily lives of eight suburban housewives who have chosen to be put in jail for the purposes of this fake psychological experiment. A preview for the first episode shows the usual tears and tantrums associated with reality television. I dread to think what producers will come up with next season, but if any of them are reading this blog—stop it! We’ve had enough reality television to last us a lifetime!

The first sentence of this paragraph is the topic sentence. It tells the reader that the paragraph will be about reality television shows, and it expresses the writer’s distaste for these shows through the use of the word bombarded.

Paragraphs that begin with the topic sentence move from the general to the specific. They open with a general statement about a subject (reality shows) and then discuss specific examples (the reality show Prisoner). Most academic essays contain the topic sentence at the beginning of the first paragraph.

Now take a look at the following paragraph. The topic sentence is underlined for you.

Last year, a cat traveled 130 miles to reach its family, who had moved to another state and had left their pet behind. Even though it had never been to their new home, the cat was able to track down its former owners. A dog in my neighborhood can predict when its master is about to have a seizure. It makes sure that he does not hurt himself during an epileptic fit. Compared to many animals, our own senses are almost dull.

This technique is frequently used in persuasive writing. The writer produces detailed examples as evidence to back up his or her point, preparing the reader to accept the concluding topic sentence as the truth.

For many years, I suffered from severe anxiety every time I took an exam. Hours before the exam, my heart would begin pounding, my legs would shake, and sometimes I would become physically unable to move. Last year, I was referred to a specialist and finally found a way to control my anxiety—breathing exercises. It seems so simple, but by doing just a few breathing exercises a couple of hours before an exam, I gradually got my anxiety under control. The exercises help slow my heart rate and make me feel less anxious. Better yet, they require no pills, no equipment, and very little time. It’s amazing how just breathing correctly has helped me learn to manage my anxiety symptoms.

Some well-organized paragraphs do not contain a topic sentence at all. Instead of being directly stated, the main idea is implied in the content of the paragraph. Read the following example:

Heaving herself up the stairs, Luella had to pause for breath several times. She let out a wheeze as she sat down heavily in the wooden rocking chair. Tao approached her cautiously, as if she might crumble at the slightest touch. He studied her face, like parchment; stretched across the bones so finely he could almost see right through the skin to the decaying muscle underneath. Luella smiled a toothless grin.

Identify the topic sentence, supporting sentences, and concluding sentence in the following paragraph.

The type of supporting sentence you choose will depend on what you are writing and why you are writing. For example, if you are attempting to persuade your audience to take a particular position you should rely on facts, statistics, and concrete examples, rather than personal opinions. Read the following example:

There are numerous advantages to owning a hybrid car. (Topic sentence)

First, they get 20 percent to 35 percent more miles to the gallon than a fuel-efficient gas-powered vehicle. (Supporting sentence 1: statistic)

Because they do not require gas, hybrid cars reduce dependency on fossil fuels, which helps lower prices at the pump. (Supporting sentence 3: reason)

Alex bought a hybrid car two years ago and has been extremely impressed with its performance. (Supporting sentence 4: example)

Given the low running costs and environmental benefits of owning a hybrid car, it is likely that many more people will follow Alex’s example in the near future. (Concluding sentence)

To find information for your supporting sentences, you might consider using one of the following sources:

To read more about sources and research, see Chapter 11 “Writing from Research: What Will I Learn?”.

Topic sentence: There are numerous advantages to owning a hybrid car.

Concluding sentence: Given the low running costs and environmental benefits of owning a hybrid car, it is likely that many more people will follow Alex’s example in the near future.

Notice the use of the synonyms advantages and benefits. The concluding sentence reiterates the idea that owning a hybrid is advantageous without using the exact same words. It also summarizes two examples of the advantages covered in the supporting sentences: low running costs and environmental benefits.

You should avoid introducing any new ideas into your concluding sentence. A conclusion is intended to provide the reader with a sense of completion. Introducing a subject that is not covered in the paragraph will confuse the reader and weaken your writing.

A concluding sentence may do any of the following:

On your own paper, write one example of each type of concluding sentence based on a topic of your choice.

A strong paragraph moves seamlessly from the topic sentence into the supporting sentences and on to the concluding sentence. To help organize a paragraph and ensure that ideas logically connect to one another, writers use transitional words and phrases. A transition is a connecting word that describes a relationship between ideas. Take another look at the earlier example:

There are numerous advantages to owning a hybrid car. First, they get 20 percent to 35 percent more miles to the gallon than a fuel-efficient gas-powered vehicle. Second, they produce very few emissions during low speed city driving. Because they do not require gas, hybrid cars reduce dependency on fossil fuels, which helps lower prices at the pump. Alex bought a hybrid car two years ago and has been extremely impressed with its performance. “It’s the cheapest car I’ve ever had,” she said. “The running costs are far lower than previous gas-powered vehicles I’ve owned.” Given the low running costs and environmental benefits of owning a hybrid car, it is likely that many more people will follow Alex’s example in the near future.

To include a summarizing transition in her concluding sentence, the writer could rewrite the final sentence as follows:

In conclusion, given the low running costs and environmental benefits of owning a hybrid car, it is likely that many more people will follow Alex’s example in the near future.

The following chart provides some useful transition words to connect supporting sentences and concluding sentences. See Chapter 8 “The Writing Process: How Do I Begin?” for a more comprehensive look at transitional words and phrases.

Using your own paper, write a paragraph on a topic of your choice. Be sure to include a topic sentence, supporting sentences, and a concluding sentence and to use transitional words and phrases to link your ideas together.

Transitional words and phrases are useful tools to incorporate into workplace documents. They guide the reader through the document, clarifying relationships between sentences and paragraphs so that the reader understands why they have been written in that particular order.

For example, when writing an instructional memo, it may be helpful to consider the following transitional words and phrases: before you begin, first, next, then, finally, after you have completed. Using these transitions as a template to write your memo will provide readers with clear, logical instructions about a particular process and the order in which steps are supposed to be completed.