Imagine you are reading a book for school. You need to find important details that you can use for an assignment. However, when you begin to read, you notice that the book has very little punctuation. Sentences fail to form complete paragraphs and instead form one block of text without clear organization. Most likely, this book would frustrate and confuse you. Without clear and concise sentences, it is difficult to find the information you need.

For both students and professionals, clear communication is important. Whether you are typing an e-mail or writing a report, it is your responsibility to present your thoughts and ideas clearly and precisely. Writing in complete sentences is one way to ensure that you communicate well. This section covers how to recognize and write basic sentence structures and how to avoid some common writing errors.

Components of a Sentence

When you read a sentence, you may first look for the subject, or what the sentence is about. The subject usually appears at the beginning of a sentence as a noun or a pronoun. A noun is a word that identifies a person, place, thing, or idea. A pronoun is a word that replaces a noun. Common pronouns are I, he, she, it, you, they, and we. In the following sentences, the subject is underlined once.

Malik is the project manager for this project. He will give us our assignments.

In these sentences, the subject is a person: Malik. The pronoun He replaces and refers back to Malik.

The computer lab is where we will work. It will be open twenty-four hours a day.

The project will run for three weeks. It will have a quick turnaround.

In this chapter, please refer to the following grammar key:

Subjects are underlined once.

Desmond and Maria have been working on that design for almost a year. Books, magazines, and online articles are all good resources.

Read the following sentences. Underline the subjects, and circle the prepositional phrases.

Once you locate the subject of a sentence, you can move on to the next part of a complete sentence: the verb. A verb is often an action word that shows what the subject is doing. A verb can also link the subject to a describing word. There are three types of verbs that you can use in a sentence: action verbs, linking verbs, or helping verbs.

The dog barked at the jogger.
He gave a short speech before we ate.

The coat was old and dirty.
The clock seemed broken.

The restaurant is known for its variety of dishes.
She does speak up when prompted in class.
We have seen that movie three times.
She can tell when someone walks on her lawn.
(is, does, have, and can are helping verbs and known, speak up, seen, and tell are verbs)

Whenever you write or edit sentences, keep the subject and verb in mind. As you write, ask yourself these questions to keep yourself on track:

Subject: Who or what is the sentence about?

Verb: Which word shows an action or links the subject to a description?

Copy each sentence onto your own sheet of paper and underline the verb(s) twice. Name the type of verb(s) used in the sentence in the space provided (LV, HV, or V).

Sentence Structure, Including Fragments and Run-ons

Six basic subject-verb patterns can enhance your writing. A sample sentence is provided for each pattern. As you read each sentence, take note of where each part of the sentence falls. Notice that some sentence patterns use action verbs and others use linking verbs.

When you write a sentence with a direct object (DO), make sure that the DO receives the action of the verb.

Use what you have learned so far to bring variety in your writing. Use the following lines or your own sheet of paper to write six sentences that practice each basic sentence pattern. When you have finished, label each part of the sentence (S, V, LV, N, Adj, Adv, DO, IO).

Find an article in a newspaper, a magazine, or online that interests you. Bring it to class or post it online. Then, looking at a classmate’s article, identify one example of each part of a sentence (S, V, LV, N, Adj, Adv, DO, IO). Please share or post your results.

The sentences you have encountered so far have been independent clauses. As you look more closely at your past writing assignments, you may notice that some of your sentences are not complete. A sentence that is missing a subject or a verb is called a fragment. A fragment may include a description or may express part of an idea, but it does not express a complete thought.

Fragment: Children helping in the kitchen.

You can easily fix a fragment by adding the missing subject or verb. In the example, the sentence was missing a verb. Adding often make a mess creates an S-V-N sentence structure.

Figure 2.1 Editing Fragments That Are Missing a Subject or a Verb 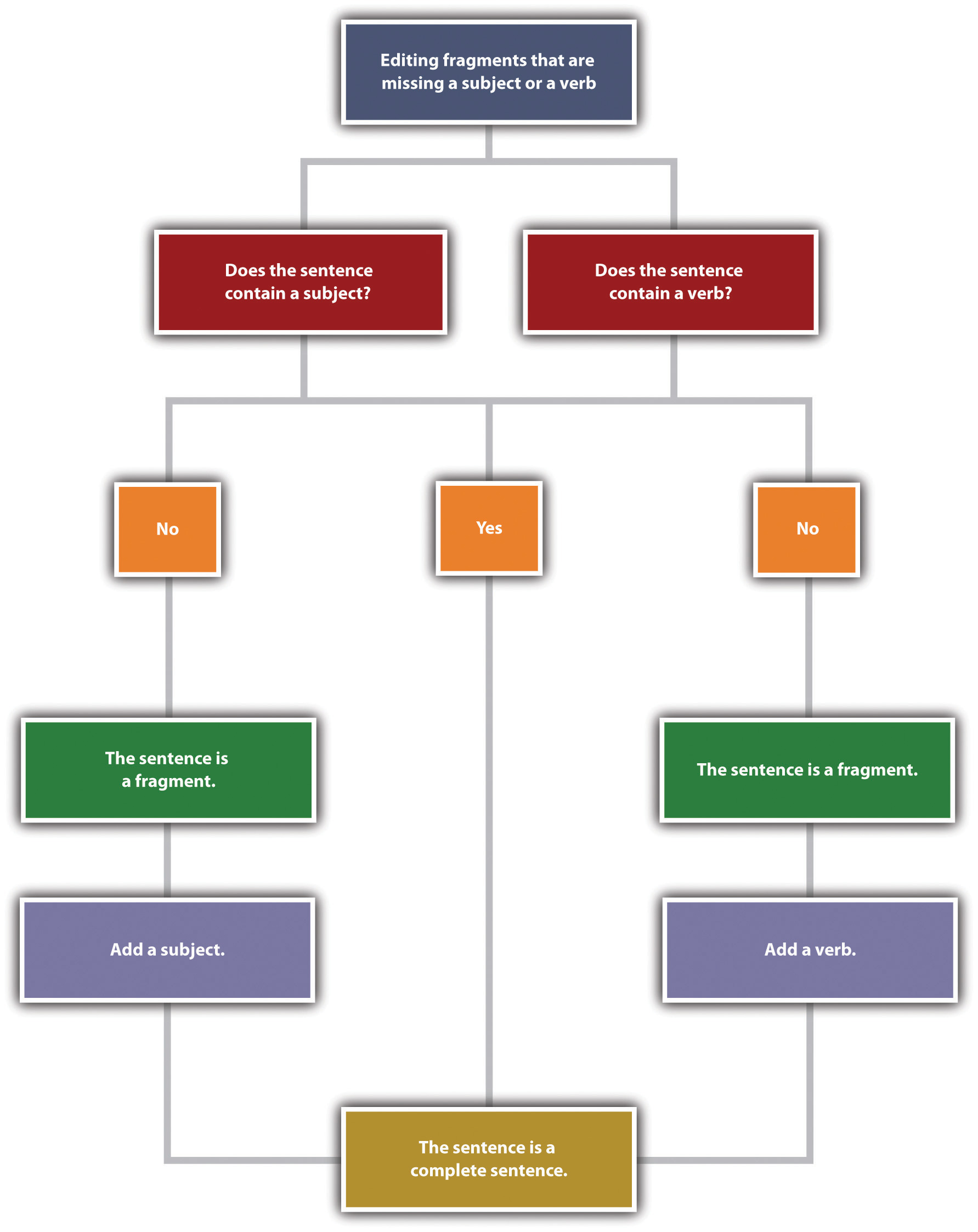 See whether you can identify what is missing in the following fragments.

Fragment: Told her about the broken vase.

Complete sentence: I told her about the broken vase.

Fragment: The store down on Main Street.

Complete sentence: The store down on Main Street sells music.

Fragments often occur because of some common error, such as starting a sentence with a preposition, a dependent word, an infinitive, or a gerund. If you use the six basic sentence patterns when you write, you should be able to avoid these errors and thus avoid writing fragments.

When you see a preposition, check to see that it is part of a sentence containing a subject and a verb. If it is not connected to a complete sentence, it is a fragment, and you will need to fix this type of fragment by combining it with another sentence. You can add the prepositional phrase to the end of the sentence. If you add it to the beginning of the other sentence, insert a comma after the prepositional phrase.

Figure 2.2 Editing Fragments That Begin with a Preposition 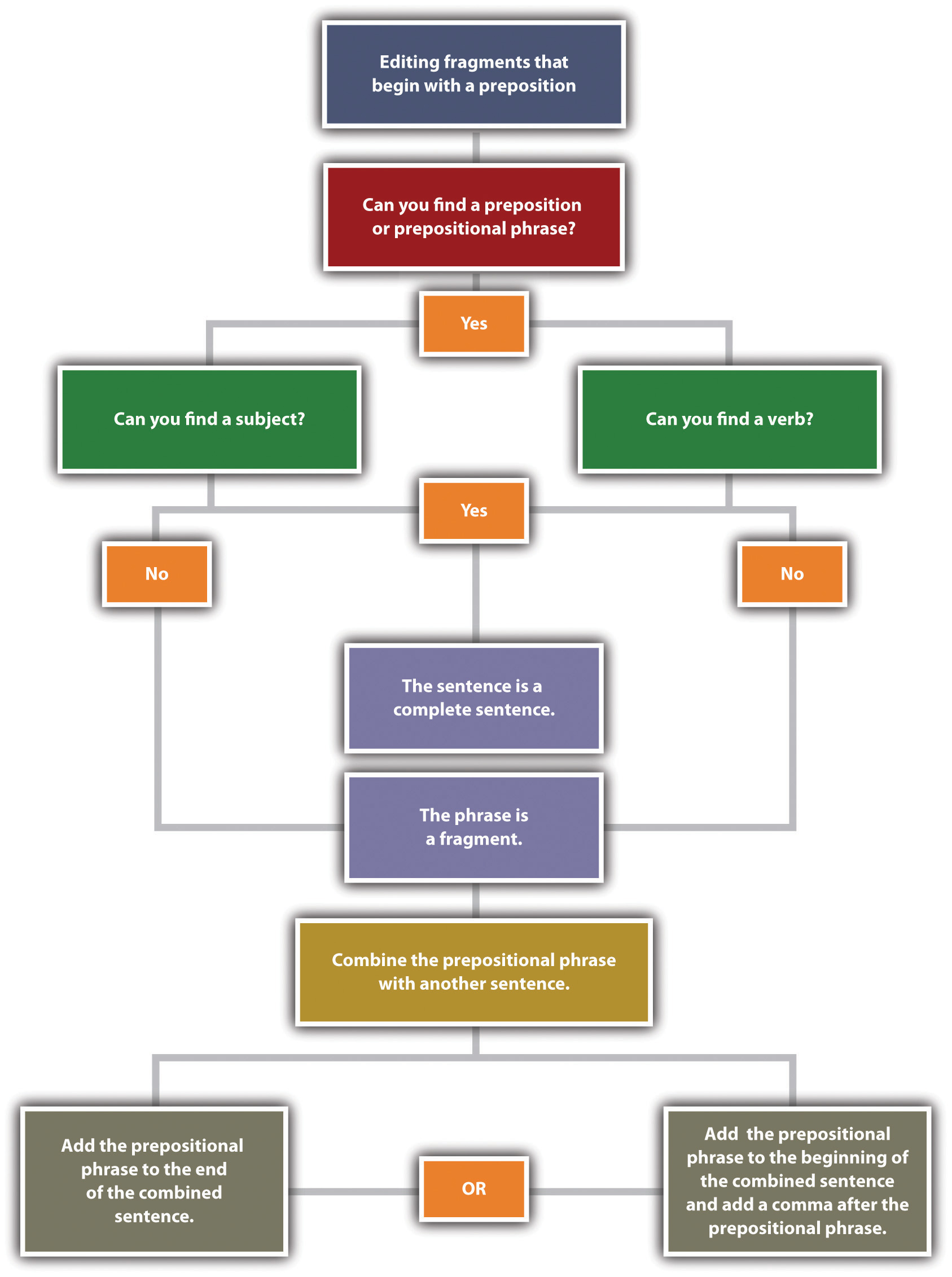 Clauses that start with a dependent word—such as since, because, without, or unless—are similar to prepositional phrases. Like prepositional phrases, these clauses can be fragments if they are not connected to an independent clause containing a subject and a verb. To fix the problem, you can add such a fragment to the beginning or end of a sentence. If the fragment is added at the beginning of a sentence, add a comma.

Verb: I was (helping verb) working (verb) on homework until midnight.
Noun: Working until midnight makes me tired the next morning.

Once you know whether the -ing word is acting as a noun or a verb, look at the rest of the sentence. Does the entire sentence make sense on its own? If not, what you are looking at is a fragment. You will need to either add the parts of speech that are missing or combine the fragment with a nearby sentence. 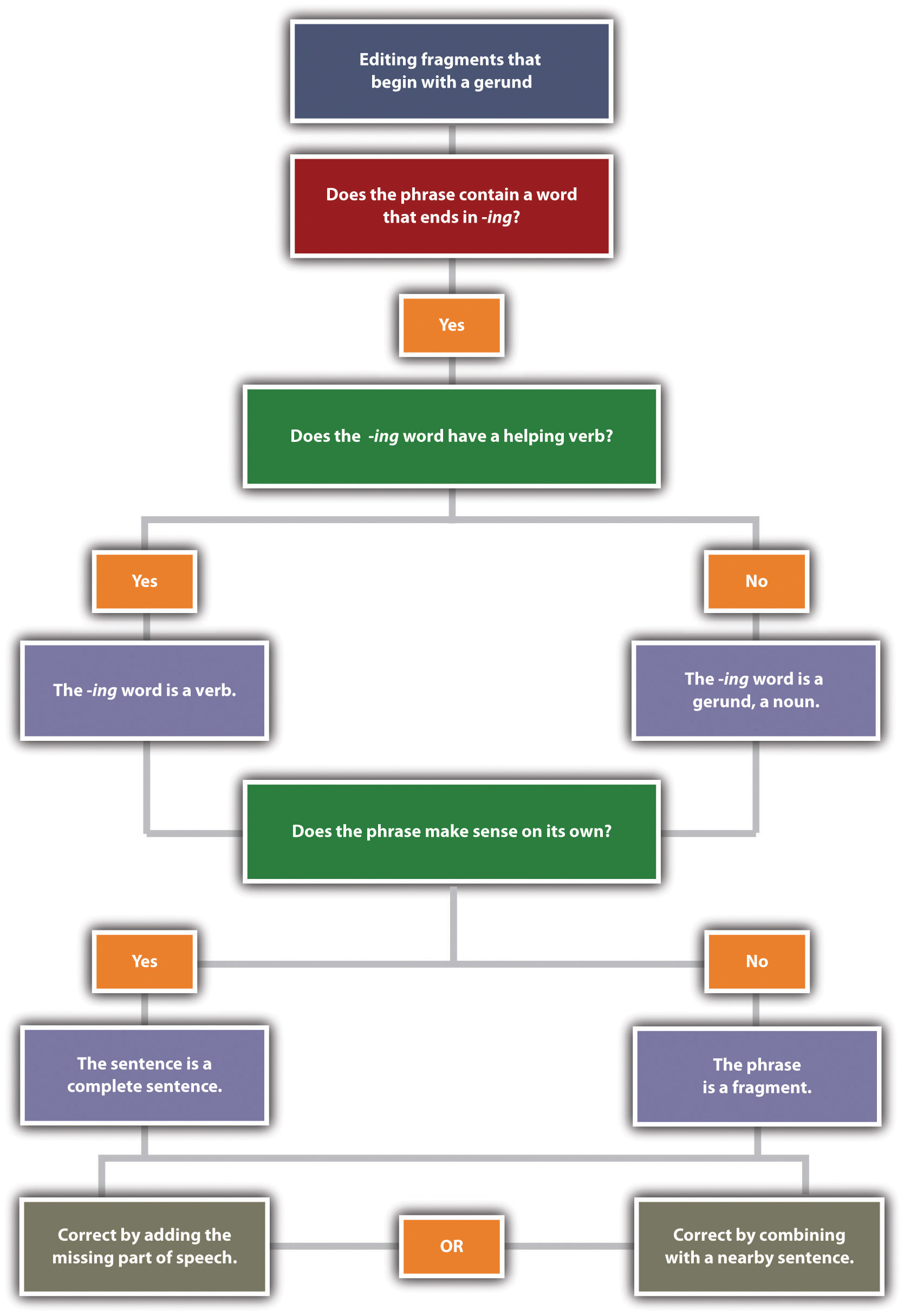 Correct: Saul prepared for his presentation. He was taking deep breaths.

Incorrect: Congratulating the entire team. Sarah raised her glass to toast their success.

Correct: She was congratulating the entire team. Sarah raised her glass to toast their success.

Correct: Congratulating the entire team, Sarah raised her glass to toast their success.

Incorrect: We needed to make three hundred more paper cranes. To reach the one thousand mark.

Correct: We needed to make three hundred more paper cranes to reach the one thousand mark.

Correct: We needed to make three hundred more paper cranes. We wanted to reach the one thousand mark.

Copy the following sentences onto your own sheet of paper and circle the fragments. Then combine the fragment with the independent clause to create a complete sentence.

Fused sentence: A family of foxes lived under our shed young foxes played all over the yard.

Comma splice: We looked outside, the kids were hopping on the trampoline.

Using a semicolon between the two complete sentences will also correct the error. A semicolon allows you to keep the two closely related ideas together in one sentence. When you punctuate with a semicolon, make sure that both parts of the sentence are independent clauses. For more information on semicolons, see Section 2.4.2 “Capitalize Proper Nouns”.

Run-on: The accident closed both lanes of traffic we waited an hour for the wreckage to be cleared.

Complete sentence: The accident closed both lanes of traffic; we waited an hour for the wreckage to be cleared.

When you use a semicolon to separate two independent clauses, you may wish to add a transition word to show the connection between the two thoughts. After the semicolon, add the transition word and follow it with a comma. For more information on transition words, see Chapter 8 “The Writing Process: How Do I Begin?”.

Run-on: The project was put on hold we didn’t have time to slow down, so we kept working.

Complete sentence: The project was put on hold; however, we didn’t have time to slow down, so we kept working.

Run-on: The new printer was installed, no one knew how to use it.

Complete sentence: The new printer was installed, but no one knew how to use it.

Run-on: We took the elevator, the others still got there before us.

Complete sentence: Although we took the elevator, the others got there before us.

Run-on: Cobwebs covered the furniture, the room hadn’t been used in years.

Complete sentence: Cobwebs covered the furniture because the room hadn’t been used in years. 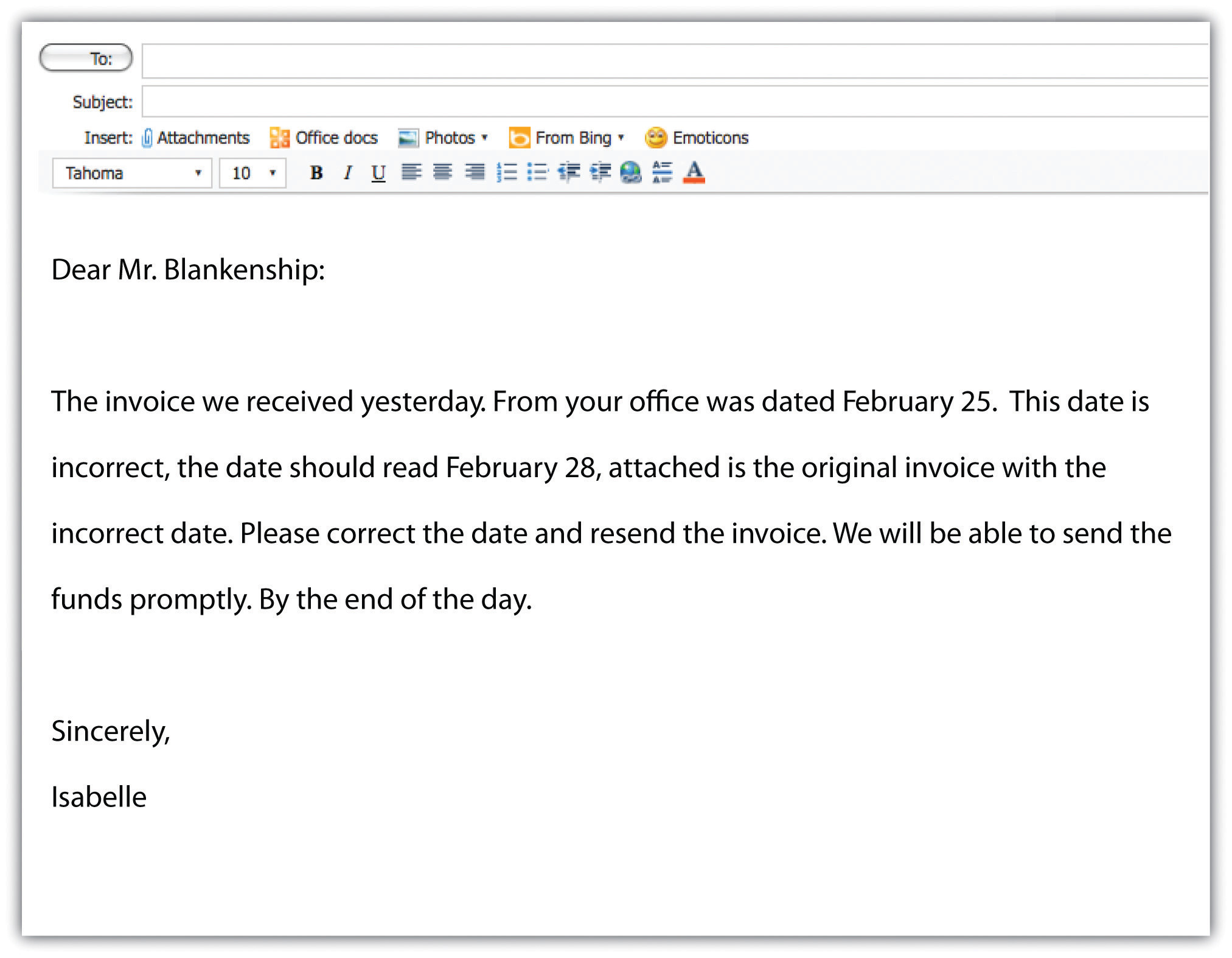 Isabelle’s e-mail opens with two fragments and two run-on sentences containing comma splices. The e-mail ends with another fragment. What effect would this e-mail have on Mr. Blankenship or other readers? Mr. Blankenship or other readers may not think highly of Isaebelle’s communication skills or—worse—may not understand the message at all! Communications written in precise, complete sentences are not only more professional but also easier to understand. Before you hit the “send” button, read your e-mail carefully to make sure that the sentences are complete, are not run together, and are correctly punctuated.

A reader can get lost or lose interest in material that is too dense and rambling. Use what you have learned about run-on sentences to correct the following passages:

Using the six basic sentence structures, write one of the following: