In the early part of the 20th century, Russian physiologist Ivan Pavlov (1849–1936) was studying the digestive system of dogs when he noticed an interesting behavioral phenomenon: The dogs began to salivate when the lab technicians who normally fed them entered the room, even though the dogs had not yet received any food. Pavlov realized that the dogs were salivating because they knew that they were about to be fed; the dogs had begun to associate the arrival of the technicians with the food that soon followed their appearance in the room. 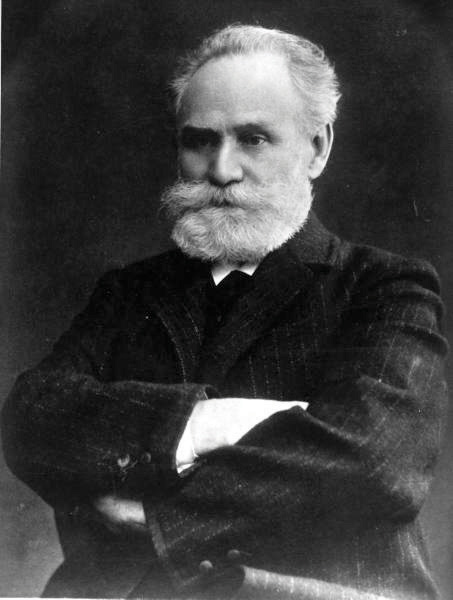 Ivan Pavlov’s research made substantial contributions to our understanding of learning.

With his team of researchers, Pavlov began studying this process in more detail. He conducted a series of experiments in which, over a number of trials, dogs were exposed to a sound immediately before receiving food. He systematically controlled the onset of the sound and the timing of the delivery of the food, and recorded the amount of the dogs’ salivation. Initially the dogs salivated only when they saw or smelled the food, but after several pairings of the sound and the food, the dogs began to salivate as soon as they heard the sound. The animals had learned to associate the sound with the food that followed. 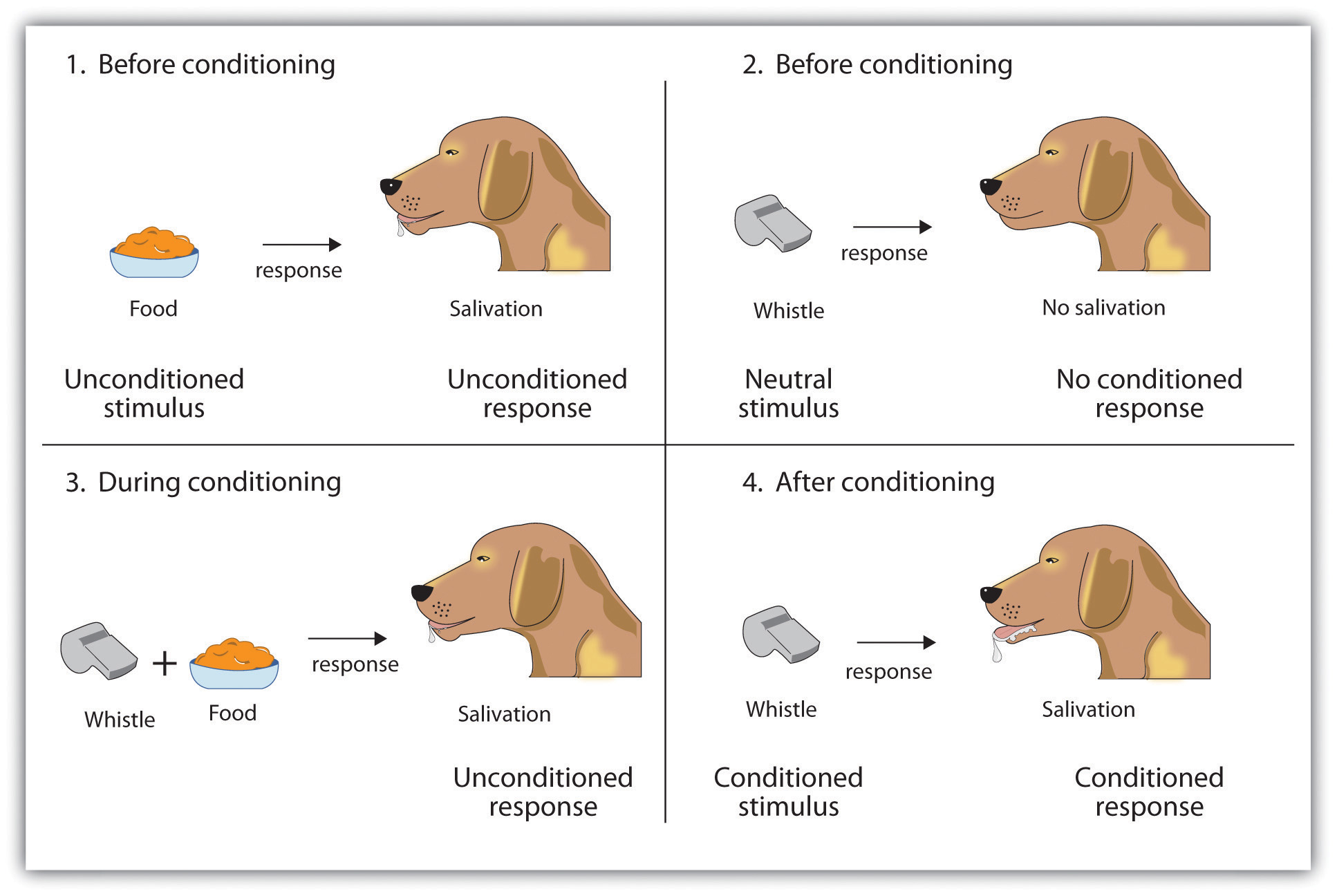 Conditioning is evolutionarily beneficial because it allows organisms to develop expectations that help them prepare for both good and bad events. Imagine, for instance, that an animal first smells a new food, eats it, and then gets sick. If the animal can learn to associate the smell (CS) with the food (US), then it will quickly learn that the food creates the negative outcome, and not eat it the next time.

The Persistence and Extinction of Conditioning

After he had demonstrated that learning could occur through association, Pavlov moved on to study the variables that influenced the strength and the persistence of conditioning. In some studies, after the conditioning had taken place, Pavlov presented the sound repeatedly but without presenting the food afterward. Figure 7.4 “Acquisition, Extinction, and Spontaneous Recovery” shows what happened. As you can see, after the intial acquisition (learning) phase in which the conditioning occurred, when the CS was then presented alone, the behavior rapidly decreased—the dogs salivated less and less to the sound, and eventually the sound did not elicit salivation at all. Extinction refers to the reduction in responding that occurs when the conditioned stimulus is presented repeatedly without the unconditioned stimulus.

Although at the end of the first extinction period the CS was no longer producing salivation, the effects of conditioning had not entirely disappeared. Pavlov found that, after a pause, sounding the tone again elicited salivation, although to a lesser extent than before extinction took place. The increase in responding to the CS following a pause after extinction is known as spontaneous recovery. When Pavlov again presented the CS alone, the behavior again showed extinction until it disappeared again.

Although the behavior has disappeared, extinction is never complete. If conditioning is again attempted, the animal will learn the new associations much faster than it did the first time.

Pavlov also experimented with presenting new stimuli that were similar, but not identical to, the original conditioned stimulus. For instance, if the dog had been conditioned to being scratched before the food arrived, the stimulus would be changed to being rubbed rather than scratched. He found that the dogs also salivated upon experiencing the similar stimulus, a process known as generalization. Generalization refers to the tendency to respond to stimuli that resemble the original conditioned stimulus. The ability to generalize has important evolutionary significance. If we eat some red berries and they make us sick, it would be a good idea to think twice before we eat some purple berries. Although the berries are not exactly the same, they nevertheless are similar and may have the same negative properties.

The flip side of generalization is discrimination—the tendency to respond differently to stimuli that are similar but not identical. Pavlov’s dogs quickly learned, for example, to salivate when they heard the specific tone that had preceded food, but not upon hearing similar tones that had never been associated with food. Discrimination is also useful—if we do try the purple berries, and if they do not make us sick, we will be able to make the distinction in the future. And we can learn that although the two people in our class, Courtney and Sarah, may look a lot alike, they are nevertheless different people with different personalities.

The Role of Nature in Classical Conditioning

As we have seen in Chapter 1 “Introducing Psychology”, scientists associated with the behavioralist school argued that all learning is driven by experience, and that nature plays no role. Classical conditioning, which is based on learning through experience, represents an example of the importance of the environment. But classical conditioning cannot be understood entirely in terms of experience. Nature also plays a part, as our evolutionary history has made us better able to learn some associations than others.

Clinical psychologists make use of classical conditioning to explain the learning of a phobia—a strong and irrational fear of a specific object, activity, or situation. For example, driving a car is a neutral event that would not normally elicit a fear response in most people. But if a person were to experience a panic attack in which he suddenly experienced strong negative emotions while driving, he may learn to associate driving with the panic response. The driving has become the CS that now creates the fear response.

Psychologists have also discovered that people do not develop phobias to just anything. Although people may in some cases develop a driving phobia, they are more likely to develop phobias toward objects (such as snakes, spiders, heights, and open spaces) that have been dangerous to people in the past. In modern life, it is rare for humans to be bitten by spiders or snakes, to fall from trees or buildings, or to be attacked by a predator in an open area. Being injured while riding in a car or being cut by a knife are much more likely. But in our evolutionary past, the potential of being bitten by snakes or spiders, falling out of a tree, or being trapped in an open space were important evolutionary concerns, and therefore humans are still evolutionarily prepared to learn these associations over others (Öhman & Mineka, 2001; LoBue & DeLoache, 2010).

Another evolutionarily important type of conditioning is conditioning related to food. In his important research on food conditioning, John Garcia and his colleagues (Garcia, Kimeldorf, & Koelling, 1955; Garcia, Ervin, & Koelling, 1966) attempted to condition rats by presenting either a taste, a sight, or a sound as a neutral stimulus before the rats were given drugs (the US) that made them nauseous. Garcia discovered that taste conditioning was extremely powerful—the rat learned to avoid the taste associated with illness, even if the illness occurred several hours later. But conditioning the behavioral response of nausea to a sight or a sound was much more difficult. These results contradicted the idea that conditioning occurs entirely as a result of environmental events, such that it would occur equally for any kind of unconditioned stimulus that followed any kind of conditioned stimulus. Rather, Garcia’s research showed that genetics matters—organisms are evolutionarily prepared to learn some associations more easily than others. You can see that the ability to associate smells with illness is an important survival mechanism, allowing the organism to quickly learn to avoid foods that are poisonous.

Classical conditioning has also been used to help explain the experience of posttraumatic stress disorder (PTSD), as in the case of P. K. Philips described in the chapter opener. PTSD is a severe anxiety disorder that can develop after exposure to a fearful event, such as the threat of death (American Psychiatric Association, 1994). PTSD occurs when the individual develops a strong association between the situational factors that surrounded the traumatic event (e.g., military uniforms or the sounds or smells of war) and the US (the fearful trauma itself). As a result of the conditioning, being exposed to, or even thinking about the situation in which the trauma occurred (the CS), becomes sufficient to produce the CR of severe anxiety (Keane, Zimering, & Caddell, 1985). 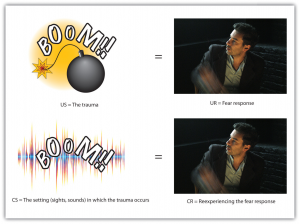 Posttraumatic stress disorder (PTSD) represents a case of classical conditioning to a severe trauma that does not easily become extinct. In this case the original fear response, experienced during combat, has become conditioned to a loud noise. When the person with PTSD hears a loud noise, she experiences a fear response even though she is now far from the site of the original trauma.

PTSD develops because the emotions experienced during the event have produced neural activity in the amygdala and created strong conditioned learning. In addition to the strong conditioning that people with PTSD experience, they also show slower extinction in classical conditioning tasks (Milad et al., 2009). In short, people with PTSD have developed very strong associations with the events surrounding the trauma and are also slow to show extinction to the conditioned stimulus.