Lucien Masson, a 60-year-old Vietnam veteran from Arizona, put it simply: “Sascha is the best medicine I’ve ever had.”

Lucien is speaking about his friend, companion, and perhaps even his therapist, a Russian wolfhound named Sascha. Lucien suffers from posttraumatic stress disorder (PTSD), a disorder that has had a profoundly negative impact on his life for many years. His symptoms include panic attacks, nightmares, and road rage. Lucien has tried many solutions, consulting with doctors, psychiatrists, and psychologists, and using a combination of drugs, group therapy, and anger-management classes.

But Sascha seems to be the best therapist of all. He helps out in many ways. If a stranger gets too close to Lucien in public, Sascha will block the stranger with his body. Sascha is trained to sense when Lucien is about to have a nightmare, waking him before it starts. Before road rage can set in, Sascha gently whimpers, reminding his owner that it doesn’t pay to get upset about nutty drivers.

In the same way, former Army medic Jo Hanna Schaffer speaks of her Chihuahua, Cody: “I never took a pill for PTSD that did as much for me as Cody has done.” Persian Gulf War veteran Karen Alexander feels the same way about her Bernese mountain dog, Cindy:

She’ll come up and touch me, and that is enough of a stimulus to break the loop, bring me back to reality. Sometimes I’ll scratch my hand until it’s raw and won’t realize until she comes up to me and brings me out. She’s such a grounding influence for me. 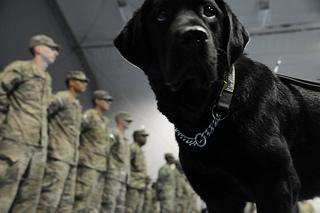 Can psychiatric therapy dogs help people who suffer from PTSD?

These dramatic stories of improvement from debilitating disorders can be attributed to an alternative psychological therapy, based on established behavioral principles, provided by “psychiatric service dogs.” The dogs are trained to help people with a variety of mental disorders, including panic attacks, anxiety disorder, obsessive-compulsive disorder, and bipolar disorder. They help veterans of Iraq and Afghanistan cope with their traumatic brain injuries as well as with PTSD.

The dogs are trained to perform specific behaviors that are helpful to their owners. If the dog’s owner is depressed, the dog will snuggle up and offer physical comfort; if the owner is having a panic attack, the owner can calm himself by massaging the dog’s body. The serenity shown by the dogs in all situations seems to reassure the PTSD sufferer that all must be well. Service dogs are constant, loving companions who provide emotional support and companionship to their embattled, often isolated owners (Shim, 2008; Lorber, 2010; Alaimo, 2010; Schwartz, 2008).

Despite the reports of success from many users, it is important to keep in mind that the utility of psychiatric service dogs has not yet been tested, and thus would never be offered as a therapy by a trained clinician or paid for by an insurance company. Although interaction between humans and dogs can create positive physiological responses (Odendaal, 2000), whether the dogs actually help people recover from PTSD is not yet known.

Psychological disorders create a tremendous individual, social, and economic drain on society. Disorders make it difficult for people to engage in productive lives and effectively contribute to their family and to society. Disorders lead to disability and absenteeism in the workplace, as well as physical problems, premature death, and suicide. At a societal level the costs are staggering. It has been estimated that the annual financial burden of each case of anxiety disorder is over $3,000 per year, meaning that the annual cost of anxiety disorders alone in the United States runs into the trillions of dollars (Konnopka, Leichsenring, Leibing, & König, 2009; Smit et al., 2006).

The goal of this chapter is to review the techniques that are used to treat psychological disorder. Just as psychologists consider the causes of disorder in terms of the bio-psycho-social model of illness, treatment is also based on psychological, biological, and social approaches.

A clinician may focus on any or all of the three approaches to treatment, but in making a decision about which to use, he or she will always rely on his or her knowledge about existing empirical tests of the effectiveness of different treatments. These tests, known as outcome studies, carefully compare people who receive a given treatment with people who do not receive a treatment, or with people who receive a different type of treatment. Taken together, these studies have confirmed that many types of therapies are effective in treating disorder.