Question: LIFO reverses the FIFO cost flow assumption so that the last costs incurred are the first reclassified to cost of goods sold. How is LIFO applied to the inventory of an actual business? If the Mayberry Home Improvement Store adopted LIFO, how would the reported figures have been affected by this decision?

Answer: Periodic LIFO. In a periodic system, only the computation of the ending inventory is altered by the choice of a cost flow assumption1. Thus, for this illustration, beginning inventory remains $440 (4 units at $110 each) and the number of units purchased is still eight with a cost of $1,048. The reported figure that changes is the cost of the ending inventory. Four bathtubs remain in stock at the end of the year. According to LIFO, the last costs are transferred to cost of goods sold; only the cost of the first four units remains in ending inventory. That is $110 per unit or $440 in total.

Perpetual LIFO. The mechanical structure for a perpetual LIFO system is the same as that demonstrated for perpetual FIFO except that the most recent costs are moved into cost of goods sold at the time of each sale (points A, B, and C). 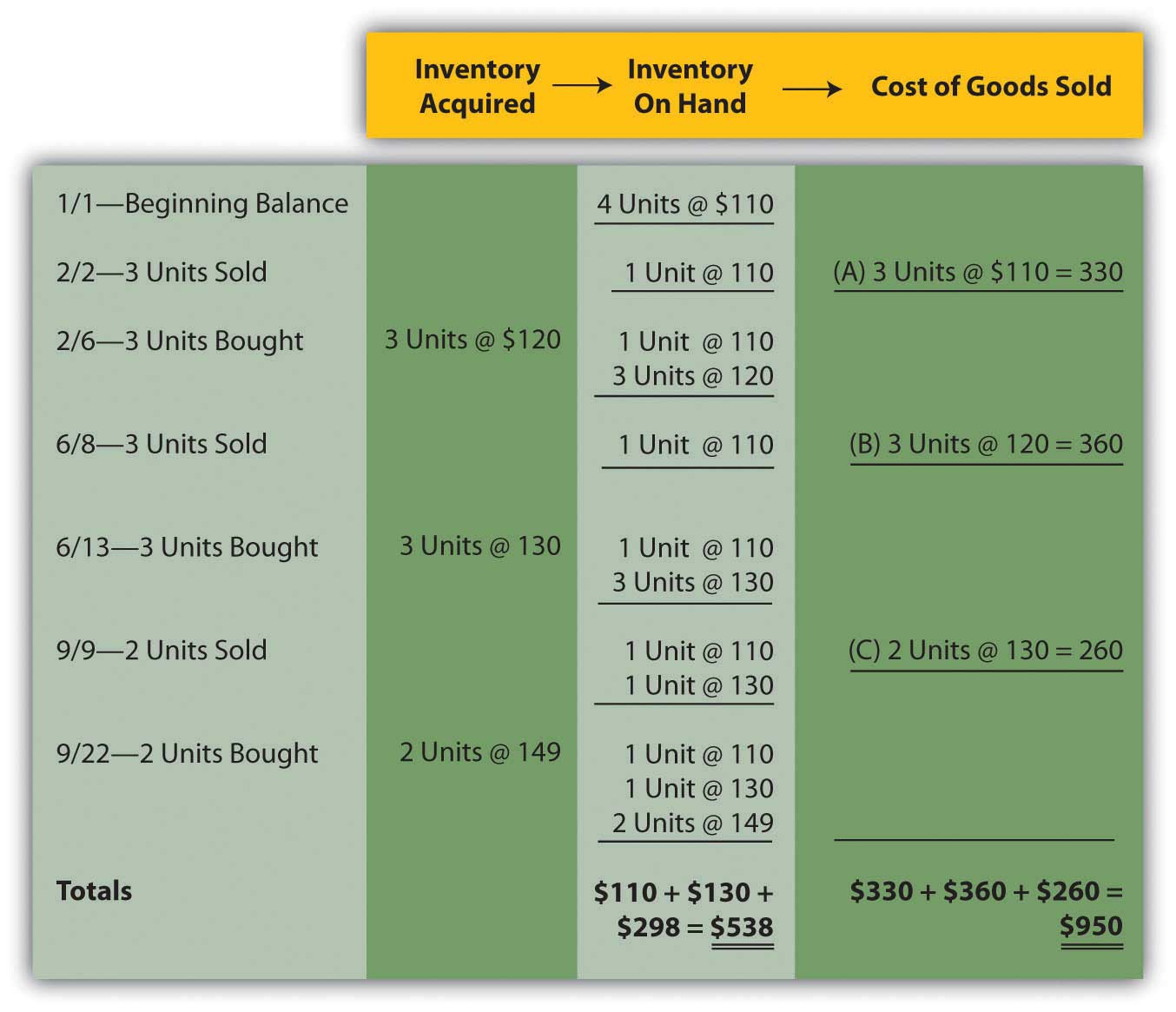 Once again, the last cell in the “inventory on hand” column contains the asset figure to be reported on the balance sheet (a total of $538) while the summation of the “cost of goods sold” column provides the amount to be shown on the income statement ($950).

As can be seen here, periodic and perpetual LIFO do not necessarily produce identical numbers.

Periodic and perpetual FIFO always arrive at the same results. In contrast, balances reported by periodic and perpetual LIFO frequently differ. Although the first cost incurred in a period (the cost transferred to expense under FIFO) is the same regardless of the date of sale, this is not true for the last or most recent cost (expensed according to LIFO).

As an illustration, note that two bathtubs were sold on September 9 in this example. Perpetual LIFO immediately determines the cost of this sale and reclassifies the amount. On that date, the cost of the last two units ($130 each) came from the June 13 purchase. That amount is expensed. In contrast, a periodic LIFO system makes that same determination but not until December 31. As viewed from year’s end, the last costs were $149 each. Although these items were bought on September 22, which is after the last sale, they are included in the cost of goods sold for a periodic LIFO system.

Two bathtubs were sold on September 9 but the identity of the specific costs to be transferred depends on the date on which the determination is made. A periodic system views the costs from the perspective of the end of the year, while perpetual does so immediately when a sale is made.

Question: Not surprisingly, averaging follows a path similar to that of the previous examples. Costs are either moved to cost of goods sold at the end of the year (periodic or weighted average) or at the time of each new sale (perpetual or moving average). The only added variable to this process is the calculation of average cost. In the operation of an averaging system, when and how is the average cost of inventory determined?

Answer: Periodic (weighted) average. In the problem being examined here, Mayberry Home Improvement Store eventually held twelve bathtubs. Four of these units were on hand at the start of the year and the other eight were acquired during the period. The beginning inventory cost $440 and the new purchases were bought for a total of $1,048. Thus, these twelve units had a total cost of $1,488 ($440 + $1,048) or $124 per bathtub ($1,488/12 units). When applying a weighted average system, this single average is the basis for both the ending inventory and cost of goods sold to be included in the company’s financial statements. No item actually cost $124 but that average is applied to all units.

Perpetual (moving) average. In this final approach to maintaining and reporting inventory, each time that a company buys inventory at a new price, the average cost is recalculated. Therefore, a moving average system must be programmed to update the average whenever additional merchandise is acquired. 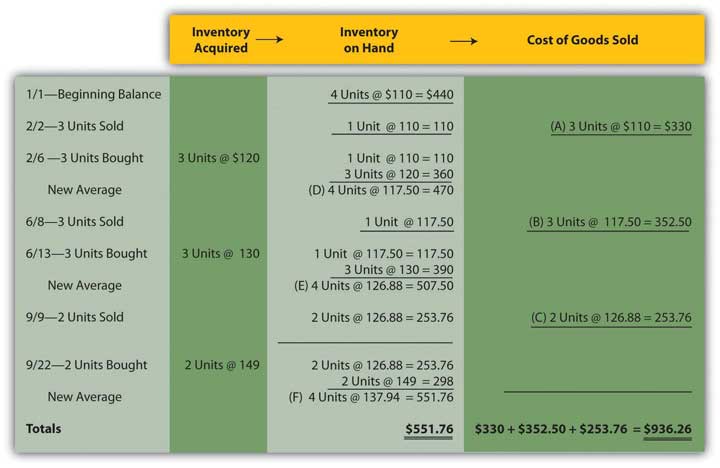 Summary. The six inventory systems shown here for Mayberry Home Improvement Store provide a number of distinct pictures of ending inventory and cost of goods sold. As stated earlier, these numbers are all fairly presented but only in conformity with the specified principles being applied.