Although some careers require less interaction than others, all jobs require interpersonal communication skills. Shows like The Office and The Apprentice offer glimpses into the world of workplace relationships. These humorous examples often highlight the dysfunction that can occur within a workplace. Since many people spend as much time at work as they do with their family and friends, the workplace becomes a key site for relational development. The workplace relationships we’ll discuss in this section include supervisor-subordinate relationships, workplace friendships, and workplace romances (Sias, 2009).

Given that most workplaces are based on hierarchy, it is not surprising that relationships between supervisors and their subordinates develop (Sias, 2009). The supervisor-subordinate relationship can be primarily based in mentoring, friendship, or romance and includes two people, one of whom has formal authority over the other. In any case, these relationships involve some communication challenges and rewards that are distinct from other workplace relationships.

Information exchange is an important part of any relationship, whether it is self-disclosure about personal issues or disclosing information about a workplace to a new employee. Supervisors are key providers of information, especially for newly hired employees who have to negotiate through much uncertainty as they are getting oriented. The role a supervisor plays in orienting a new employee is important, but it is not based on the same norm of reciprocity that many other relationships experience at their onset. On a first date, for example, people usually take turns communicating as they learn about each other. Supervisors, on the other hand, have information power because they possess information that the employees need to do their jobs. The imbalanced flow of communication in this instance is also evident in the supervisor’s role as evaluator. Most supervisors are tasked with giving their employees formal and informal feedback on their job performance. In this role, positive feedback can motivate employees, but what happens when a supervisor has negative feedback? Research shows that supervisors are more likely to avoid giving negative feedback if possible, even though negative feedback has been shown to be more important than positive feedback for employee development. This can lead to strains in a relationship if behavior that is in need of correcting persists, potentially threatening the employer’s business and the employee’s job.

We’re all aware that some supervisors are better than others and may have even experienced working under good and bad bosses. So what do workers want in a supervisor? Research has shown that employees more positively evaluate supervisors when they are of the same gender and race (Sias, 2009). This isn’t surprising, given that we’ve already learned that attraction is often based on similarity. In terms of age, however, employees prefer their supervisors be older than them, which is likely explained by the notion that knowledge and wisdom come from experience built over time. Additionally, employees are more satisfied with supervisors who exhibit a more controlling personality than their own, likely because of the trust that develops when an employee can trust that their supervisor can handle his or her responsibilities. Obviously, if a supervisor becomes coercive or is an annoying micromanager, the controlling has gone too far. High-quality supervisor-subordinate relationships in a workplace reduce employee turnover and have an overall positive impact on the organizational climate (Sias, 2005). Another positive effect of high-quality supervisor-subordinate relationships is the possibility of mentoring.

Relationships in a workplace can range from someone you say hello to almost daily without knowing her or his name, to an acquaintance in another department, to your best friend that you go on vacations with. We’ve already learned that proximity plays an important role in determining our relationships, and most of us will spend much of our time at work in proximity to and sharing tasks with particular people. However, we do not become friends with all our coworkers. 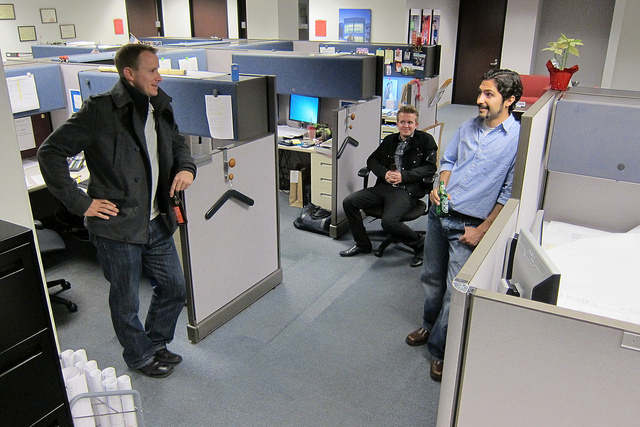 Having coworkers who are also friends enhances information exchange and can lead to greater job satisfaction.

Even though we might not have a choice about whom we work with, we do choose who our friends at work will be. Coworker relationships move from strangers to friends much like other friendships. Perceived similarity may lead to more communication about workplace issues, which may lead to self-disclosure about non-work-related topics, moving a dyad from acquaintances to friends. Coworker friendships may then become closer as a result of personal or professional problems. For example, talking about family or romantic troubles with a coworker may lead to increased closeness as self-disclosure becomes deeper and more personal. Increased time together outside of work may also strengthen a workplace friendship (Sias & Cahill, 1998). Interestingly, research has shown that close friendships are more likely to develop among coworkers when they perceive their supervisor to be unfair or unsupportive. In short, a bad boss apparently leads people to establish closer friendships with coworkers, perhaps as a way to get the functional and relational support they are missing from their supervisor.

Friendships between peer coworkers have many benefits, including making a workplace more intrinsically rewarding, helping manage job-related stress, and reducing employee turnover. Peer friendships may also supplement or take the place of more formal mentoring relationships (Sias & Cahill, 1998). Coworker friendships also serve communicative functions, creating an information chain, as each person can convey information they know about what’s going on in different areas of an organization and let each other know about opportunities for promotion or who to avoid. Friendships across departmental boundaries in particular have been shown to help an organization adapt to changing contexts. Workplace friendships may also have negative effects. Obviously information chains can be used for workplace gossip, which can be unproductive. Additionally, if a close friendship at work leads someone to continue to stay in a job that they don’t like for the sake of the friendship, then the friendship is not serving the interests of either person or the organization. Although this section has focused on peer coworker friendships, some friendships have the potential to develop into workplace romances.

Individuals may engage in workplace romances for many reasons, three of which are job motives, ego motives, and love motives (Sias, 2009). Job motives include gaining rewards such as power, money, or job security. Ego motives include the “thrill of the chase” and the self-esteem boost one may get. Love motives include the desire for genuine affection and companionship. Despite the motives, workplace romances impact coworkers, the individuals in the relationship, and workplace policies. Romances at work may fuel gossip, especially if the couple is trying to conceal their relationship. This could lead to hurt feelings, loss of trust, or even jealousy. If coworkers perceive the relationship is due to job motives, they may resent the appearance of favoritism and feel unfairly treated. The individuals in the relationship may experience positive effects such as increased satisfaction if they get to spend time together at work and may even be more productive. Romances between subordinates and supervisors are more likely to slow productivity. If a relationship begins to deteriorate, the individuals may experience more stress than other couples would, since they may be required to continue to work together daily.

Over the past couple decades, there has been a national discussion about whether or not organizations should have policies related to workplace relationships, and there are many different opinions. Company policies range from complete prohibition of romantic relationships, to policies that only specify supervisor-subordinate relationships as off-limits, to policies that don’t prohibit but discourage love affairs in the workplace (Sias, 2009). One trend that seeks to find middle ground is the “love contract” or “dating waiver” (Boyd, 2010). This requires individuals who are romantically involved to disclose their relationship to the company and sign a document saying that it is consensual and they will not engage in favoritism. Some businesses are taking another route and encouraging workplace romances. Southwest Airlines, for example, allows employees of any status to date each other and even allows their employees to ask passengers out on a date. Other companies like AT&T and Ben and Jerry’s have similar open policies (Boyd, 2010).

Communication in the Real World by University of Minnesota is licensed under a Creative Commons Attribution-NonCommercial-ShareAlike 4.0 International License, except where otherwise noted.