Small groups have to start somewhere. Even established groups go through changes as members come and go, as tasks are started and completed, and as relationships change. In this section, we will learn about the stages of group development, which are forming, storming, norming, performing, and adjourning (Tuckman & Jensen, 1977). As with most models of communication phenomena, although we order the stages and discuss them separately, they are not always experienced in a linear fashion. Additionally, some groups don’t experience all five stages, may experience stages multiple times, or may experience more than one stage at a time.

Given that interpersonal bonds are likely not yet formed and people are unfamiliar with the purpose of the group or task at hand, there are high levels of uncertainty. Early stages of role negotiation begin and members begin to determine goals for the group and establish rules and norms. Group cohesion also begins to form during this stage. Group cohesion refers to the commitment of members to the purpose of the group and the degree of attraction among individuals within the group (Hargie, 2011). The cohesion that begins in this stage sets the group on a trajectory influenced by group members’ feelings about one another and their purpose or task. Groups with voluntary membership may exhibit high levels of optimism about what the group can accomplish. Although the optimism can be motivating, unrealistic expectations can lead to disappointment, making it important for group members to balance optimism with realism. Groups with assigned or mandatory membership may include members that carry some degree of resentment toward the group itself or the goals of the group. These members can start the group off on a negative trajectory that will lessen or make difficult group cohesiveness. Groups can still be successful if these members are balanced out by others who are more committed to and positive in regards to the purpose of the group.

Many factors influence how the forming stage of group development plays out. The personalities of the individuals in the group, the skills that members bring, the resources available to the group, the group’s size, and the group’s charge all contribute to the creation of the early tone of and climate within a group (Ellis & Fisher, 1994). For example, more dominant personalities may take early leadership roles in the group that can affect subsequent decisions. Group members’ diverse skill sets and access to resources can also influence the early stages of role differentiation. In terms of size, the bonding that begins in the forming stage becomes difficult when the number of people within the group prevents every person from having a one-on-one connection with every other member of the group. Also, in larger groups, more dominant members tend to assert themselves as leaders and build smaller coalitions within the group, which can start the group on a trajectory toward more conflict during the upcoming storming stage (Ellis & Fisher, 1994).

When a group receives an external charge, meaning that the goal or purpose of the group is decided by people outside the group, there may be less uncertainty related to the task dimensions of the group. Additionally, decisions about what roles people will play including group leaders and other decisions about the workings of the group may come from the outside, which reduces some of the uncertainty inherent in the forming stage. Relational uncertainty can also be diminished when group members have preexisting relationships or familiarity with each other. Although the decreased uncertainty may be beneficial at this stage, too much imposed structure from the outside can create resentment or a feeling of powerlessness among group members. So a manageable amount of uncertainty is actually a good thing for group cohesion and productivity.

During the storming stage of group development, conflict emerges as people begin to perform their various roles, have their ideas heard, and negotiate where they fit in the group’s structure. The uncertainty present in the forming stage begins to give way as people begin to occupy specific roles and the purpose, rules, and norms of a group become clearer. Conflict develops when some group members aren’t satisfied with the role that they or others are playing or the decisions regarding the purpose or procedures of the group. For example, if a leader begins to emerge or is assigned during the forming stage, some members may feel that the leader is imposing his or her will on other members of the group. As we will learn in our section on group leadership, leaders should expect some degree of resentment from others who wanted to be the leader, have interpersonal conflicts with the leader, or just have general issues with being led.

Although the word storming and the concept of conflict have negative connotations, conflict can be positive and productive. Just like storms can replenish water supplies and make crops grow, storming can lead to group growth. While conflict is inevitable and should be experienced by every group, a group that gets stuck at the storming stage will likely not have much success in completing its task or achieving its purpose. Influences from outside the group can also affect the conflict in the storming stage. Interpersonal conflicts that predate the formation of the group may distract the group from the more productive idea- or task-oriented conflict that can be healthy for the group and increase the quality of ideas, decision making, and output. 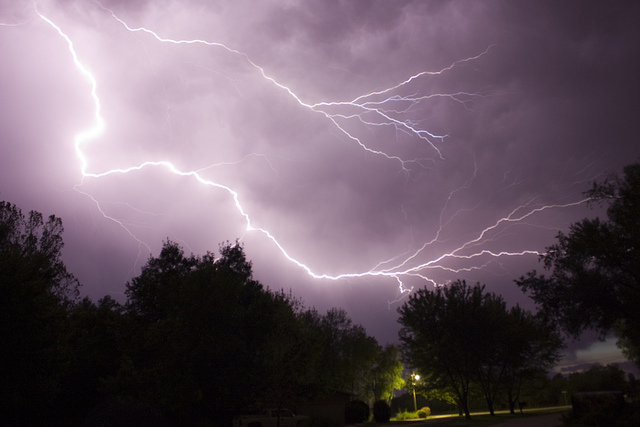 Although we often have negative connotations of storming and conflict, the group conflict that happens in this stage is necessary and productive.

During the norming stage of group development, the practices and expectations of the group are solidified, which leads to more stability, productivity, and cohesion within the group. Group norms are behaviors that become routine but are not explicitly taught or stated. In short, group norms help set the tone for what group members ought to do and how they ought to behave (Ellis & Fisher, 1994). Many implicit norms are derived from social norms that people follow in their everyday life. Norms within the group about politeness, lateness, and communication patterns are typically similar to those in other contexts. Sometimes a norm needs to be challenged because it is not working for the group, which could lead a group back to the storming stage. Other times, group members challenge norms for no good reason, which can lead to punishment for the group member or create conflict within the group.

At this stage, there is a growing consensus among group members as to the roles that each person will play, the way group interactions will typically play out, and the direction of the group. Leaders that began to emerge have typically gained the support of other group members, and group identity begins to solidify. The group may now be recognizable by those on the outside, as slogans, branding, or patterns of interaction become associated with the group. This stage of group development is key for the smooth operation of the group. Norms bring a sense of predictability and stability that can allow a group to move on to the performing stage of group development. Norms can also bring with them conformity pressures that can be positive or negative. In general, people go along with a certain amount of pressure to conform out of a drive to avoid being abnormal that is a natural part of our social interaction (Ellis & Fisher, 1994). Too much pressure, however, can lead people to feel isolated and can create a negative group climate. We will learn more about pressure as a group dynamic later in this chapter.

Explicit rules may also guide group interaction. Rules are explicitly stated guidelines for members and may refer to things like expected performance levels or output, attitudes, or dress codes. Rules may be communicated through verbal instructions, employee handbooks, membership policies, or codes of conduct (Hargie, 2011). Groups can even use procedures like Robert’s Rules of Order to manage the flow of conversations and decision-making procedures. Group members can contest or subvert group rules just as they can norms. Violations of group rules, however, typically result in more explicit punishments than do violations of norms.

During the performing stage of group development, group members work relatively smoothly toward the completion of a task or achievement of a purpose. Although interactions in the performing stage are task focused, the relational aspects of group interaction provide an underlying support for the group members. Socialization outside of official group time can serve as a needed relief from the group’s task. During task-related interactions, group members ideally begin to develop a synergy that results from the pooling of skills, ideas, experiences, and resources. Synergy is positive in that it can lead group members to exceed their expectations and perform better than they could individually. Glitches in the group’s performance can lead the group back to previous stages of group development. Changes in membership, member roles, or norms can necessitate a revisiting of aspects of the forming, storming, or norming stages. One way to continue to build group cohesion during the performing stage is to set short-term attainable group goals. Accomplishing something, even if it’s small, can boost group morale, which in turn boosts cohesion and productivity.

The adjourning stage of group development occurs when a group dissolves because it has completed its purpose or goal, membership is declining and support for the group no longer exists, or it is dissolved because of some other internal or external cause. Some groups may live on indefinitely and not experience the adjourning stage. Other groups may experience so much conflict in the storming stage that they skip norming and performing and dissolve before they can complete their task. For groups with high social cohesion, adjourning may be a difficult emotional experience. However, group members may continue interpersonal relationships that formed even after the group dissolves. In reality, many bonds, even those that were very close, end up fading after the group disbands. This doesn’t mean the relationship wasn’t genuine; interpersonal relationships often form because of proximity and shared task interaction. Once that force is gone, it becomes difficult to maintain friendships, and many fade away. For groups that had negative experiences, the adjourning stage may be welcomed.

To make the most out of the adjourning stage, it is important that there be some guided and purposeful reflection. Many groups celebrate their accomplishments with a party or ceremony. Even groups that had negative experiences or failed to achieve their purpose can still learn something through reflection in the adjourning stage that may be beneficial for future group interactions. Often, group members leave a group experience with new or more developed skills that can be usefully applied in future group or individual contexts. Even groups that are relational rather than task focused can increase members’ interpersonal, listening, or empathetic skills or increase cultural knowledge and introduce new perspectives.

Communication in the Real World by University of Minnesota is licensed under a Creative Commons Attribution-NonCommercial-ShareAlike 4.0 International License, except where otherwise noted.