The heart of any survey research project is the survey questionnaire itself. Although it is easy to think of interesting questions to ask people, constructing a good survey questionnaire is not easy at all. The problem is that the answers people give can be influenced in unintended ways by the wording of the items, the order of the items, the response options provided, and many other factors. At best, these influences add noise to the data. At worst, they result in systematic biases and misleading results. In this section, therefore, we consider some principles for constructing survey questionnaires to minimize these unintended effects and thereby maximize the reliability and validity of respondents’ answers.

Survey Responding as a Psychological Process

Before looking at specific principles of survey questionnaire construction, it will help to consider survey responding as a psychological process.

Figure 9.1 “Model of the Cognitive Processes Involved in Responding to a Survey Item” presents a model of the cognitive processes that people engage in when responding to a survey item (Sudman, Bradburn, & Schwarz, 1996). Respondents must interpret the question, retrieve relevant information from memory, form a tentative judgment, convert the tentative judgment into one of the response options provided (e.g., a rating on a 1-to-7 scale), and finally edit their response as necessary.

Figure 9.1 Model of the Cognitive Processes Involved in Responding to a Survey Item

How many alcoholic drinks do you consume in a typical day?

Although this item at first seems straightforward, it poses several difficulties for respondents. First, they must interpret the question. For example, they must decide whether “alcoholic drinks” include beer and wine (as opposed to just hard liquor) and whether a “typical day” is a typical weekday, typical weekend day, or both. Once they have interpreted the question, they must retrieve relevant information from memory to answer it. But what information should they retrieve, and how should they go about retrieving it? They might think vaguely about some recent occasions on which they drank alcohol, they might carefully try to recall and count the number of alcoholic drinks they consumed last week, or they might retrieve some existing beliefs that they have about themselves (e.g., “I am not much of a drinker”). Then they must use this information to arrive at a tentative judgment about how many alcoholic drinks they consume in a typical day. For example, this might mean dividing the number of alcoholic drinks they consumed last week by seven to come up with an average number per day. Then they must format this tentative answer in terms of the response options actually provided. In this case, the options pose additional problems of interpretation. For example, what does “average” mean, and what would count as “somewhat more” than average? Finally, they must decide whether they want to report the response they have come up with or whether they want to edit it in some way. For example, if they believe that they drink much more than average, they might not want to report this for fear of looking bad in the eyes of the researcher.

From this perspective, what at first appears to be a simple matter of asking people how much they drink (and receiving a straightforward answer from them) turns out to be much more complex.

Again, this complexity can lead to unintended influences on respondents’ answers. These are often referred to as context effects because they are not related to the content of the item but to the context in which the item appears (Schwarz & Strack, 1990). For example, there is an item-order effect when the order in which the items are presented affects people’s responses. One item can change how participants interpret a later item or change the information that they retrieve to respond to later items. For example, researcher Fritz Strack and his colleagues asked college students about both their general life satisfaction and their dating frequency (Strack, Martin, & Schwarz, 1988). When the life satisfaction item came first, the correlation between the two was only −.12, suggesting that the two variables are only weakly related. But when the dating frequency item came first, the correlation between the two was +.66, suggesting that those who date more have a strong tendency to be more satisfied with their lives. Reporting the dating frequency first made that information more accessible in memory so that they were more likely to base their life satisfaction rating on it.

Open-ended items are useful when researchers do not know how participants might respond or want to avoid influencing their responses. They tend to be used when researchers have more vaguely defined research questions—often in the early stages of a research project. Open-ended items are relatively easy to write because there are no response options to worry about. However, they take more time and effort on the part of participants, and they are more difficult for the researcher to analyze because the answers must be transcribed, coded, and submitted to some form of content analysis.

Closed-ended items ask a question and provide a set of response options for participants to choose from. The alcohol item just mentioned is an example, as are the following:

How old are you?

On a scale of 0 (no pain at all) to 10 (worst pain ever experienced), how much pain are you in right now?

Have you ever in your adult life been depressed for a period of 2 weeks or more?

Closed-ended items are used when researchers have a good idea of the different responses that participants might make. They are also used when researchers are interested in a well-defined variable or construct such as participants’ level of agreement with some statement, perceptions of risk, or frequency of a particular behavior. Closed-ended items are more difficult to write because they must include an appropriate set of response options. However, they are relatively quick and easy for participants to complete. They are also much easier for researchers to analyze because the responses can be easily converted to numbers and entered into a spreadsheet. For these reasons, closed-ended items are much more common.

All closed-ended items include a set of response options from which a participant must choose. For categorical variables like sex, race, or political party preference, the categories are usually listed and participants choose the one (or ones) that they belong to. For quantitative variables, a rating scale is typically provided. A rating scale is an ordered set of responses that participants must choose from. Figure 9.2 “Example Rating Scales for Closed-Ended Questionnaire Items” shows several examples. The number of response options on a typical rating scale ranges from three to 11—although five and seven are probably most common. They can consist entirely of verbal labels or they can consist of a set of numbers with verbal labels as “anchors.” In some cases, the verbal labels or numbers can be supplemented with (or even replaced by) meaningful graphics. The last rating scale shown in Figure 9.2 “Example Rating Scales for Closed-Ended Questionnaire Items” is a visual-analog scale, on which participants make a mark somewhere along the horizontal line to indicate the magnitude of their response. 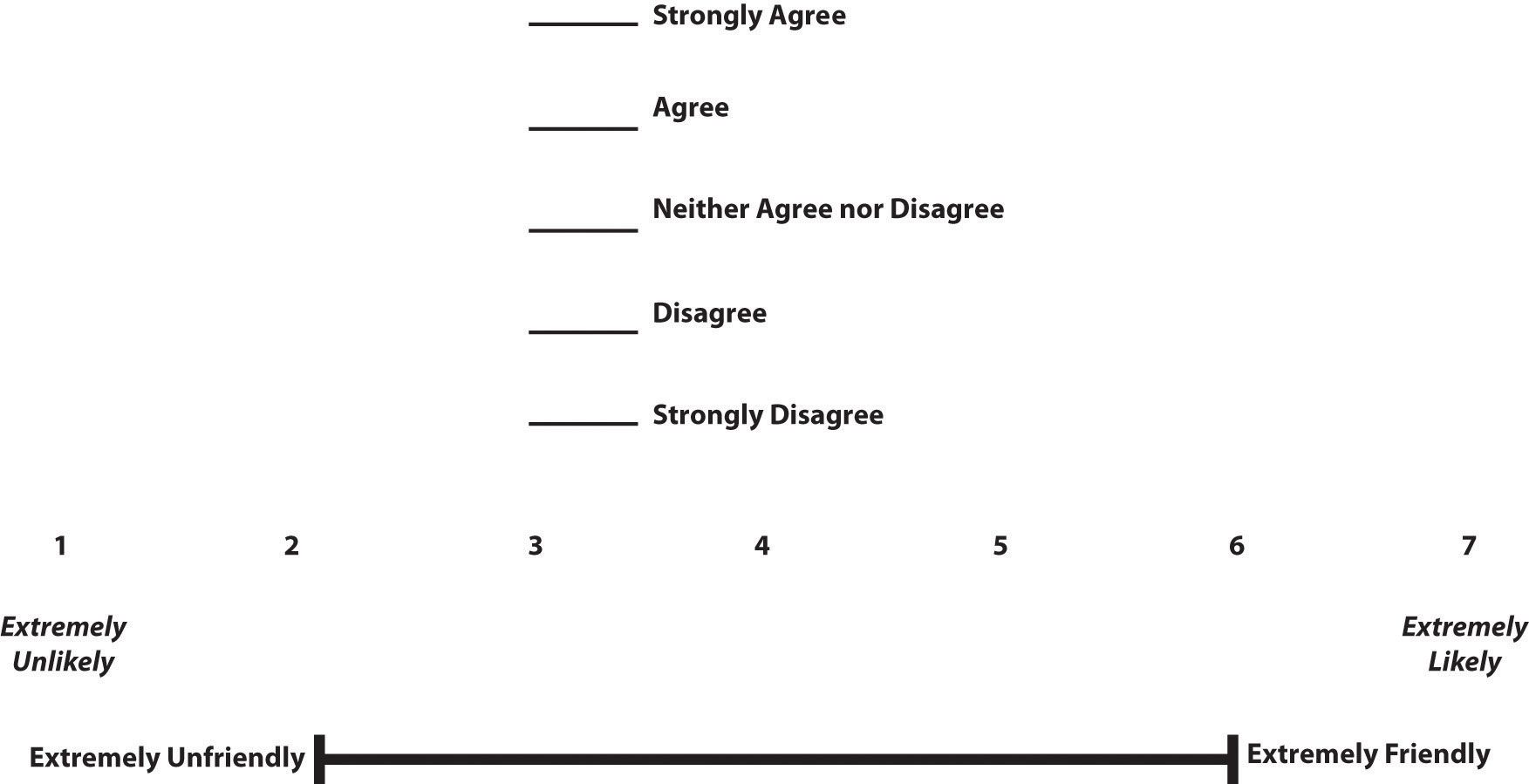 What Is a Likert Scale?

In reading about psychological research, you are likely to encounter the term Likert scale. Although this term is sometimes used to refer to almost any rating scale (e.g., a 0-to-10 life satisfaction scale), it has a much more precise meaning.

In the 1930s, researcher Rensis Likert (pronounced LICK-ert) created a new approach for measuring people’s attitudes (Likert, 1932). It involves presenting people with several statements—including both favorable and unfavorable statements—about some person, group, or idea. Respondents then express their agreement or disagreement with each statement on a 5-point scale: Strongly Agree, Agree, Neither Agree nor Disagree, Disagree, Strongly Disagree. Numbers are assigned to each response (with reverse coding as necessary) and then summed across all items to produce a score representing the attitude toward the person, group, or idea. The entire set of items came to be called a Likert scale.

Thus unless you are measuring people’s attitude toward something by assessing their level of agreement with several statements about it, it is best to avoid calling it a Likert scale. You are probably just using a “rating scale.”

For rating scales, five or seven response options generally allow about as much precision as respondents are capable of. However, numerical scales with more options can sometimes be appropriate. For dimensions such as attractiveness, pain, and likelihood, a 0-to-10 scale will be familiar to many respondents and easy for them to use. Regardless of the number of response options, the most extreme ones should generally be “balanced” around a neutral or modal midpoint. An example of an unbalanced rating scale measuring perceived likelihood might look like this:

Note, however, that a middle or neutral response option does not have to be included. Researchers sometimes choose to leave it out because they want to encourage respondents to think more deeply about their response and not simply choose the middle option by default.

Writing effective items is only one part of constructing a survey questionnaire. For one thing, every survey questionnaire should have a written or spoken introduction that serves two basic functions (Peterson, 2000). One is to encourage respondents to participate in the survey. In many types of research, such encouragement is not necessary either because participants do not know they are in a study (as in naturalistic observation) or because they are part of a subject pool and have already shown their willingness to participate by signing up and showing up for the study. Survey research usually catches respondents by surprise when they answer their phone, go to their mailbox, or check their e-mail—and the researcher must make a good case for why they should agree to participate. Thus the introduction should briefly explain the purpose of the survey and its importance, provide information about the sponsor of the survey (university-based surveys tend to generate higher response rates), acknowledge the importance of the respondent’s participation, and describe any incentives for participating.

The second function of the introduction is to establish informed consent. Remember that this means describing to respondents everything that might affect their decision to participate. This includes the topics covered by the survey, the amount of time it is likely to take, the respondent’s option to withdraw at any time, confidentiality issues, and so on. Written consent forms are not typically used in survey research, so it is important that this part of the introduction be well documented and presented clearly and in its entirety to every respondent.

The introduction should be followed by the substantive questionnaire items. But first, it is important to present clear instructions for completing the questionnaire, including examples of how to use any unusual response scales. Remember that this is the point at which respondents are usually most interested and least fatigued, so it is good practice to start with the most important items for purposes of the research and proceed to less important items. Items should also be grouped by topic or by type. For example, items using the same rating scale (e.g., a 5-point agreement scale) should be grouped together if possible to make things faster and easier for respondents. Demographic items are often presented last because they are least interesting to participants but also easy to answer in the event respondents have become tired or bored. Of course, any survey should end with an expression of appreciation to the respondent.