A Model of Scientific Research in Psychology

Figure 1.2 “A Simple Model of Scientific Research in Psychology” presents a more specific model of scientific research in psychology. The researcher (who more often than not is really a small group of researchers) formulates a research question, conducts a study designed to answer the question, analyzes the resulting data, draws conclusions about the answer to the question, and publishes the results so that they become part of the research literature. Because the research literature is one of the primary sources of new research questions, this process can be thought of as a cycle. New research leads to new questions, which lead to new research, and so on. Figure 1.2 “A Simple Model of Scientific Research in Psychology” also indicates that research questions can originate outside of this cycle either with informal observations or with practical problems that need to be solved. But even in these cases, the researcher would start by checking the research literature to see if the question had already been answered and to refine it based on what previous research had already found.

Figure 1.2 A Simple Model of Scientific Research in Psychology 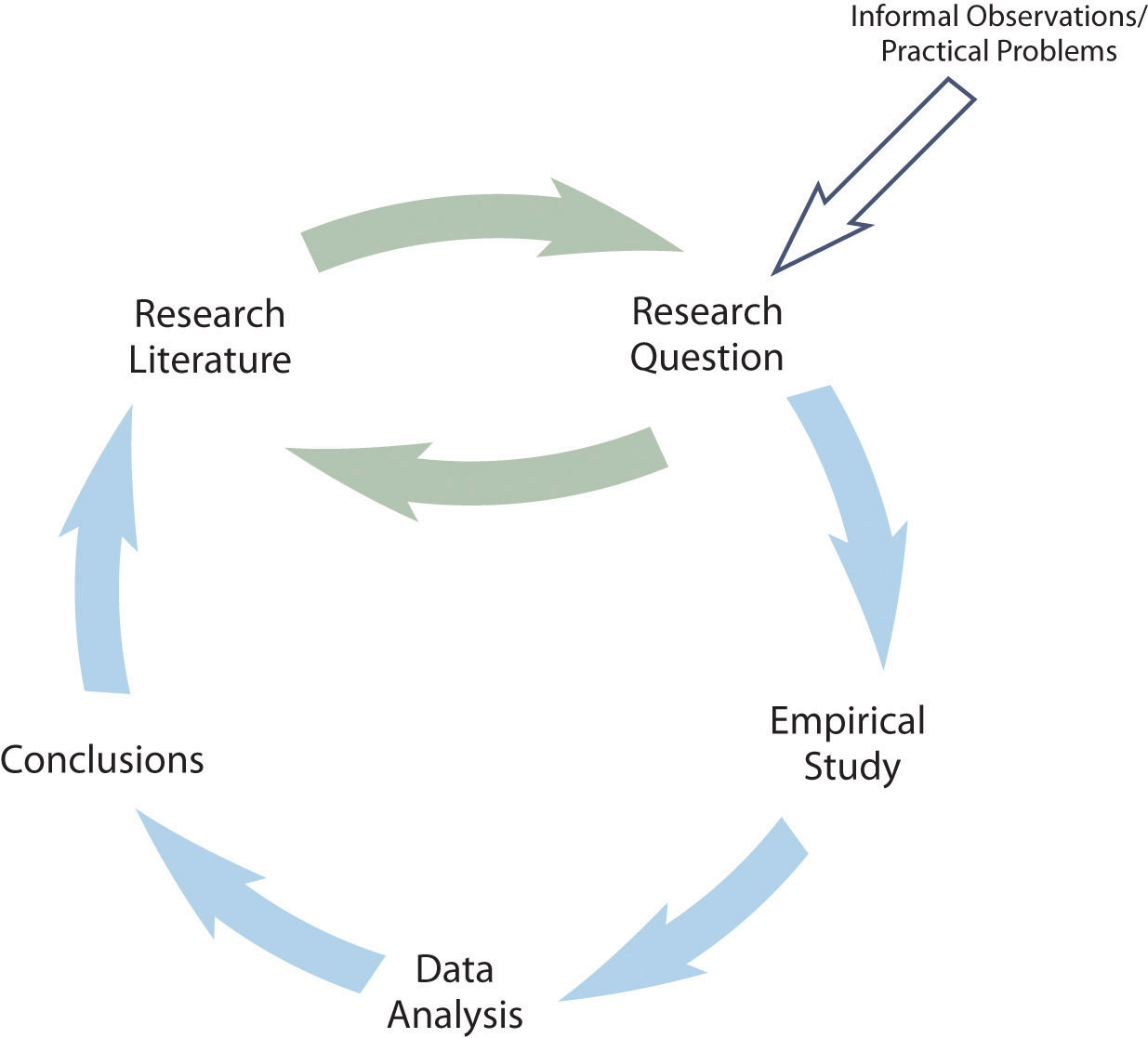 The research by Mehl and his colleagues is described nicely by this model. Their question—whether women are more talkative than men—was suggested to them both by people’s stereotypes and by published claims about the relative talkativeness of women and men. When they checked the research literature, however, they found that this question had not been adequately addressed in scientific studies. They conducted a careful empirical study, analyzed the results (finding very little difference between women and men), and published their work so that it became part of the research literature. The publication of their article is not the end of the story, however, because their work suggests many new questions (about the reliability of the result, about potential cultural differences, etc.) that will likely be taken up by them and by other researchers inspired by their work. 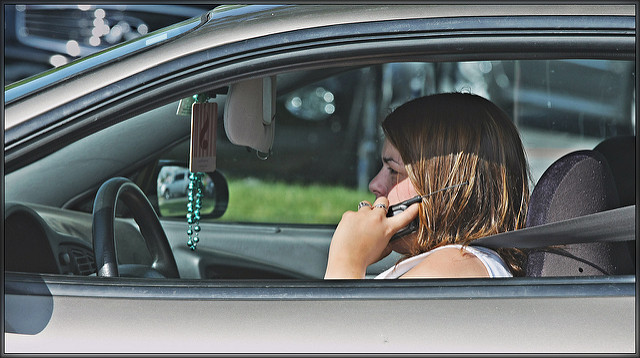 Scientific research has confirmed that cell phone use impairs a variety of driving behaviors.

As another example, consider that as cell phones became more widespread during the 1990s, people began to wonder whether, and to what extent, cell phone use had a negative effect on driving. Many psychologists decided to tackle this question scientifically (Collet, Guillot, & Petit, 2010). It was clear from previously published research that engaging in a simple verbal task impairs performance on a perceptual or motor task carried out at the same time, but no one had studied the effect specifically of cell phone use on driving. Under carefully controlled conditions, these researchers compared people’s driving performance while using a cell phone with their performance while not using a cell phone, both in the lab and on the road. They found that people’s ability to detect road hazards, reaction time, and control of the vehicle were all impaired by cell phone use. Each new study was published and became part of the growing research literature on this topic.

Who Conducts Scientific Research in Psychology?

Scientific research in psychology is generally conducted by people with doctoral degrees (usually the doctor of philosophy [PhD]) and master’s degrees in psychology and related fields, often supported by research assistants with bachelor’s degrees or other relevant training. Some of them work for government agencies (e.g., the National Institute of Mental Health), for nonprofit organizations (e.g., the American Cancer Society), or in the private sector (e.g., in product development). However, the majority of them are college and university faculty, who often collaborate with their graduate and undergraduate students. Although some researchers are trained and licensed as clinicians—especially those who conduct research in clinical psychology—the majority are not. Instead, they have expertise in one or more of the many other subfields of psychology: behavioral neuroscience, cognitive psychology, developmental psychology, personality psychology, social psychology, and so on. Doctoral-level researchers might be employed to conduct research full-time or, like many college and university faculty members, to conduct research in addition to teaching classes and serving their institution and community in other ways.

Of course, people also conduct research in psychology because they enjoy the intellectual and technical challenges involved and the satisfaction of contributing to scientific knowledge of human behavior. You might find that you enjoy the process too. If so, your college or university might offer opportunities to get involved in ongoing research as either a research assistant or a participant. Of course, you might find that you do not enjoy the process of conducting scientific research in psychology. But at least you will have a better understanding of where scientific knowledge in psychology comes from, an appreciation of its strengths and limitations, and an awareness of how it can be applied to solve practical problems in psychology and everyday life.

A fun and easy way to follow current scientific research in psychology is to read any of the many excellent blogs devoted to summarizing and commenting on new findings. Among them are the following:

You can also browse to http://www.researchblogging.org, select psychology as your topic, and read entries from a wide variety of blogs.

The Broader Purposes of Scientific Research in Psychology

People have always been curious about the natural world, including themselves and their behavior. (In fact, this is probably why you are studying psychology in the first place.) Science grew out of this natural curiosity and has become the best way to achieve detailed and accurate knowledge. Keep in mind that most of the phenomena and theories that fill psychology textbooks are the products of scientific research. In a typical introductory psychology textbook, for example, one can learn about specific cortical areas for language and perception, principles of classical and operant conditioning, biases in reasoning and judgment, and people’s surprising tendency to obey authority. And scientific research continues because what we know right now only scratches the surface of what we can know.

Scientific research is often classified as being either basic or applied. Basic research in psychology is conducted primarily for the sake of achieving a more detailed and accurate understanding of human behavior, without necessarily trying to address any particular practical problem. The research of Mehl and his colleagues falls into this category. Applied research is conducted primarily to address some practical problem. Research on the effects of cell phone use on driving, for example, was prompted by safety concerns and has led to the enactment of laws to limit this practice. Although the distinction between basic and applied research is convenient, it is not always clear-cut. For example, basic research on sex differences in talkativeness could eventually have an effect on how marriage therapy is practiced, and applied research on the effect of cell phone use on driving could produce new insights into basic processes of perception, attention, and action.