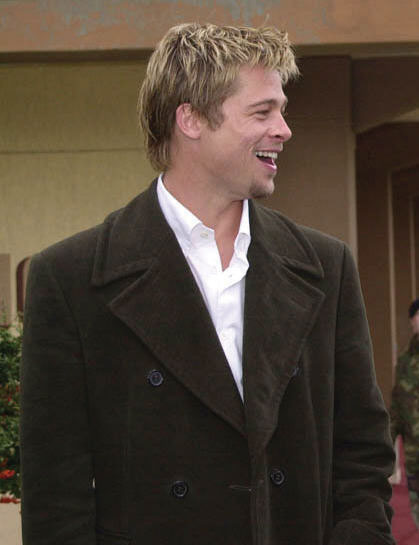 The film actor Brad Pitt has been personally involved in helping rebuild the city of New Orleans after it was devastated by Hurricane Katrina in 2005. As one who has always been interested in architecture, Pitt created a rebuilding project and donated $5 million of his own money to get it started. With the help of some architectural firms, he produced a wide variety of ecologically friendly homes and flood-proof designs. The website (http://www.makeitrightnola.org) asks businesses, religious groups, and individuals to provide grants and donations for house projects.

Pitt says the primary goal of his work is to replace homes, although many officials and politicians wonder whether it is a good idea to rebuild these houses in area that is likely to be flooded again.

To publicize his cause, Pitt had 150 huge pink Monopoly-shaped houses built around the Lower Ninth Ward. The pink blocks, which he described as a work of art, emphasize the needs of the ward and his ideas for redesign.

Pitt said at the time that rebuilding the Lower Ninth Ward was a bigger priority than his movie career, a project he was going to see through to the end.

I’m sure you remember when Hurricane Katrina hit the southern coast of the United States in the fall of 2005. The hurricane created billions of dollars in damage, destroyed a good part of the city of New Orleans and other Southern towns, and caused the dislocation of thousands of people from their homes. The hurricane made news across the world, and the disaster was not ignored. Hundreds of thousands of people made financial contributions to help rebuild the cities and repair the lives that were devastated by the storm. During the first few months after the storm, thousands more people came from across the country, and even from around the world, to help clean up the mess and repair the damage that the storm had caused. Many of these volunteers had been to New Orleans, and some had families and friends there. Others came simply because they had heard about the disaster and wanted to help the people who were so profoundly affected by it.

When you hear about this type of behavior, you may wonder about its meaning for human nature. Why would people sacrifice so much of themselves for others who cannot help them in return? Is helping part of the normal human experience, or are these acts unusual, unexpected, and rare? Who is most likely to help, who are we most likely to help, and under what social circumstances do we help or not help? And what biological, personal, social, and cultural factors influence helping?

On the other hand, perhaps you are skeptical about altruism. You may have noticed the many cases in which people seem oblivious to the needs of others. We allow tens of millions of people in our country to live in poverty, we do little to help fellow citizens who do not receive adequate health care, and often we seem to be more concerned with ourselves that we are with others. You might wonder whether people ever perform behaviors that are not designed—at least in some way—to benefit themselves. Perhaps at least some of the Katrina volunteers, and even Brad Pitt himself, were really helping—at least in part—for themselves. The money and time that they volunteered might have been motivated by the desire to avoid being seen as selfish, or by the fear of feeling guilty if they did not help. Perhaps our seemingly altruistic behaviors are actually motivated not by the desire to increase another’s welfare but by the desire to enhance the self.

Human nature has created a general tendency for people to enjoy the company of others and to trust, care for, and respect other people. This idea leads us to expect that we will, in most cases, be helpful and cooperative, and perhaps even altruistic. There is evidence to support this idea. According to a survey given by an established coalition that studies and encourages volunteering (http://www.independentsector.org), in the year 2001 over 83 million American adults reported that they helped others by volunteering and did so an average of 3.6 hours per week. The survey estimated that the value of the volunteer time that was given was over 239 billion dollars. It seems that many people are helpful to others. Indeed, although few of us are likely to have the opportunity to engage in an act of helpful heroism, we are all likely to have the opportunity to help somebody sometime, and it is likely that—if the costs are not too great—we will do so.

If you are thinking like a social psychologist, you will realize that whether we help or don’t help is not likely to be determined completely by random factors. Rather, these decisions are influenced by the underlying human motivations of protecting the self and reaching out to others. Some of our altruistic behavior is part of our genetic endowment—we help because we are human beings, and human beings (as are many other species) are helpful. In other cases our helping is more selfish, designed to make ourselves feel better or even to gain rewards such as praise, status, or money. Although we may not completely understand the characteristics of altruism and we cannot always predict who will or will not help others, social psychologists nevertheless have learned a great deal about these determinants.

Because we spend so much time in the presence of others, we have the opportunity to react to them in either positive or negative ways. To some people we are friendly, caring, and helpful; to others we are wary, unfriendly, or even mean and aggressive. The goal of Chapter 9 “Helping and Altruism” and Chapter 10 “Aggression” is to understand when and why people engage in either prosocial or antisocial behaviors. Let’s begin by focusing on the positive side of the equation—what makes us help others. Chapter 10 “Aggression” will discuss the flip side—the causes of human aggression.